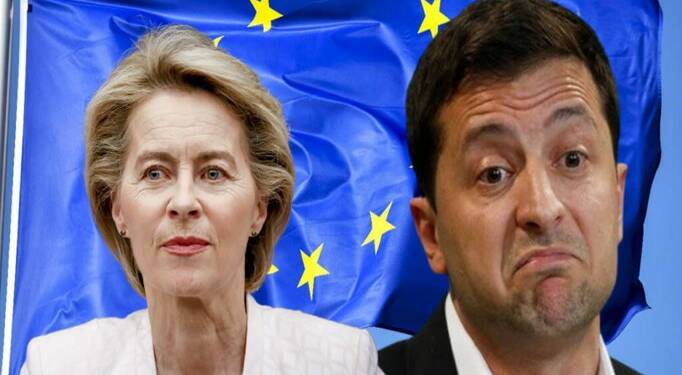 The big talks that reverberated across the Western media regarding the inclusion of Ukraine into the European Union have taken a hit. Just as President Zelensky assumed that all obstacles had been removed, his hopes of joining the EU were once again dashed, and this time by none other than the EU President Ursula von der Leyen.

Recently, during a virtual address to the Ukrainian Parliament, European Union President Ursula von der Leyen outlined the next steps in Ukraine’s path to joining the European Union.

“The next steps are within your reach. But they will require hard work, determination, and above all unity of purpose,” she told the Rada, the Parliament of Ukraine.

Before delving into real matters, the European Union president showered small praises on the valiant mores of Ukraine in putting a strong fight against Russia. She further complimented Ukraine’s arduous run that successfully grabbed them the EU candidacy, but then came the little surprise that Zelensky had never thought of.

Encumbering further an already battered Zelensky, Ursula proposed an array of demands that needed to be fulfilled for Ukraine to couch itself comfortably within the prized European Union. The first proposal was to remould the controversial Anti-Oligarch law. Critics of the law see it as a populist measure that could give more power to the sitting president.

“Today, Ukraine is the only country in Europe’s Eastern Partnership to have adopted a law to break the oligarchs’ grip on your economic and political life. And I commend you for that,” she said. But von der Leyen added that Ukraine now has to focus on implementing the law, “in a legally sound manner.”

Zelensky in a fix

According to the existing laws, the president has the ultimate control to label wealthy individuals as “oligarchs” and subject them to various restrictions. Such designated individuals are barred from owning media or funding political parties. Reconstruction of such a law would see Zelensky losing his say over the controversial matters circling oligarchs. In such a scenario, oligarchs who sympathise with the Kremlin could soon pop up on the political turf of Ukraine.

Ursula further criticised the ban imposed on the opposition parties and media in Ukraine. Zelensky in his run has managed to put a chain of control on many media outlets that he forejudged as portals having deep connections with Moscow.

Zelensky also banned the prominent opposition party, “the Opposition Platform—For Life”. The accusation levelled had the usual narrative of the party being pro-Russian. Ursula Von der Leyen brought this issue to the limelight, much to the chagrin of the Ukrainian president.

She further asserted to the Parliament that to secure the prized seat in the EU, Ukraine has to make it a practice to abide by the core ethos of democracy, regardless of the brutal times they are enduring through.

The catalogue of demands that the European Union President stamped on Ukraine is sure to put President Zelensky in a labyrinthine mess. No easy escape is assured for the former comedian to sneak past this to get into the EU. If Kyiv craves it so badly to get into the European bloc, the aforementioned laws should be amended and that won’t even stand a chance, given how Zelensky operates the Ukrainian politics.

29 Pay Attention quotes and captions to improve your skills