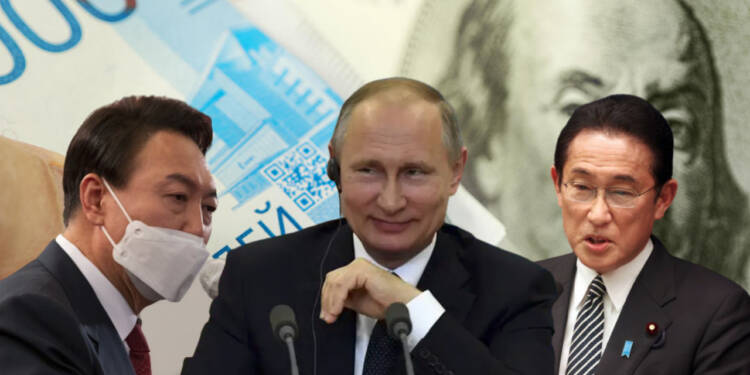 In the aftermath of the Russia-Ukraine war, the Russian currency faced a downfall. Since the February 24 invasion of Ukraine, the ruble’s value against the US dollar has fallen by as much as 40%. So, Russia had a plan in mind! and as per it, Putin had the ruble hit on all cylinders in no time.

After the imposition of sanctions, the Russian economy faced a slump. Ergo, Russia came up with a viable solution to bring round the weakening ruble. Unfriendly nations who imposed sanctions on Russia faced a ‘ruble strike’. Now, the buyers will have to foot the bills in rubles for their gas and oil imports. The nations included the likes of the US, Japan, Australia, Singapore, and Taiwan. Many of these nations buy gas from Russia and therefore fell prey to Russia and Russia used them as shields against the sanctions.

Europe imposed sanctions and Russia changed its supply policy. Russia resorted to continuing supplying natural gas to European countries but with a shift in the payment mechanism. Putin said, “The changes will only affect the currency of payment, which will be changed to Russian rubles.”

Till now, the EU importers were paying Russia in dollars for the gas imports. But sanctions have rendered Russia’s dollar assets worthless. Today, Russia can’t trade in dollars. The restrictions effectively cut off Moscow’s access to its $640 billion in foreign exchange reserves.

So, Russia is now forced to take some concrete actions to help its economy owing to which the EU buyers will first have to buy Russian rubles before buying Russian gas. In a bid to strengthen the Russian economy, circumvent Western sanctions and finance its war in Ukraine, it is taking measures that will help ratchet up the demand for the Russian ruble in the international market.

After the expansion of the payment scheme by Gazprom, two major Asian buyers of Russian Liquified Natural gas (LNG), Japan and South Korea were exempted from the request to pay in roubles. The proposal came just days after Russia moved to seize operations of the Sakhalin-2 LNG plant in retaliation to the Western sanctions.

Russia has almost forced Japan and South Korea to promote the Ruble and make way for its growth when the whole of the West is trying to bring it down.

So, Japan and South Korea are bracing up for a massive ‘ruble strike’ by Russia.