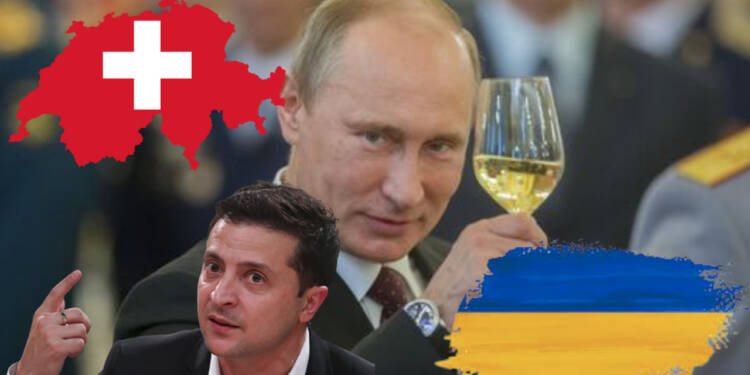 Well, Ukraine has been trying really hard to set up or force Western nations to provide money for rebuilding Ukraine. Ukraine told an international conference that it will cost an estimated $750 billion to rebuild the war-shattered country, and labeled it as a responsibility of the democratic world to do it.

Zelensky and his buddies have been trying every trick in the book. A few days ago, the PM of Ukraine Denys Shmyal demanded Switzerland to help Ukraine in its rebuilding process. This could have tarnished Switzerland’s most important policy. Indeed, the best policy i.e, Neutrality

As per reports, the Swiss bank holds up to $213 billion of Russian wealth and Switzerland has been under increasing pressure from Europe to identify and freeze the assets of Russian oligarchs for rebuilding Ukraine. But, Switzerland has finally given a big no to ‘Zelensky and his buddies.’

Switzerland has given a big ‘NO’ to Ukraine’s demands. Reportedly, Switzerland has denied Ukraine’s Prime Minister’s demands to use frozen assets of ultra-wealthy Russians to help fund his country’s $750 billion reconstruction project.

Ukrainian Prime Minister Denys Shmygal told a conference in Lugano that $300-500 billion of Russian assets had been frozen by the United States, European Union, and Britain, money he said could help rebuild wrecked schools, hospitals, and homes.

Switzerland has clearly warned that the Ukrainian proposal to confiscate billions worth of frozen Russian assets would create a dangerous precedent for the nation.

President Ignazio Cassis told reporters in Lugano while attending a conference aimed to bolster aid to Ukraine, “You have to ensure the citizens are protected against the power of the state. This is what we call liberal democracies,”

Furthermore, Cassis stressed that the “right of property is a fundamental right,” and that “seriousness” is required while discussing Russian funds held by the West.

To make a long story short, Switzerland has denied the demands of Ukraine to provide that $213 billion wealth of Russians provide help rebuilding Ukraine.

Read More: Russia becomes a sought-after property as Switzerland and UAE take turns to woo it

The Swiss Bankers Association has estimated that the assets of Russian clients deposited in Switzerland’s banks total 150-200 billion Swiss francs (about $155-$210 billion), making the country a key repository of Russian money abroad. But, Despite constant western pressures, Switzerland had made it very clear that it could not simply freeze funds if it did not have “sufficient grounds”.

The arrival of the Ukrainian PM in Switzerland was on purpose to convince Switzerland to use Russian assets for Ukraine. But, citing its neutrality and constitutional boundaries, Switzerland gave a big no.

Honestly, if Switzerland had succumbed to Ukraine’s demand, it would have set up a really wrong example for world-famous Swiss repository banks that assets are not safe there. But, Switzerland has given a $200 billion jolt to Ukraine. Now, Zelensky’s rebuilding scam lies flat.