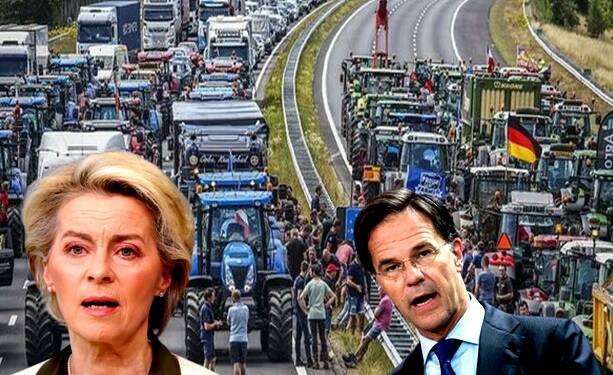 Some 40000 farmers surged into the central Netherlands region holding placards and flags to protest against the government’s newly stipulated plan to slash emissions of damaging pollutants.

The ruling coalition wants to cut emissions of pollutants, predominantly nitrogen oxide and ammonia, by 50% nationwide by 2030. Ministers call the proposal an “unavoidable transition” that aims to improve air, land, and water quality.

This proposal will likely force farmers to cut down their livestock herds and stop working altogether. The Netherlands has one of Europe’s largest livestock industries, with more than 100 million cattle, chickens, and pigs. It is also the EU’s biggest meat exporter.

Make no mistake, the government is adamant in its stand to completely shut down livestock farming to adhere further to the EU’s proposed green policy, which should completely eradicate the emission the nitrogen oxide and ammonia. Livestock produce ammonia in their urine and faeces. The government in the past has called on farmers to use feed for their animals that contains less protein as a way of reducing ammonia emissions. But having such high numbers of livestock industries, the government should have tried to gauge the aftereffects that such a move could create.

Read more:Close ties with China will make the Netherlands a pariah within the EU

Farming groups have steered their tractors to national highways blocking roads that serve as a vital trade route toward Germany and Belgium. Even tractors appeared in front of the Parliament building to show their protest. In reaction to this, Prime Minister Mark Rutte said farmers have the right to protest but not to break the law.

Without any sense of prudence, the government blatantly made statements that gave away any hope of optimism for the farmer community.

“The honest message … is that not all farmers can continue their business,” and those who do will likely have to farm differently, the government said in a statement this month as it unveiled emission reduction targets.

Wow! Dutch farmers in Moerdijk with 400 tractors positioned on the lawn to make the inscription visible from above: "No farmers, no food! Help!" pic.twitter.com/30mK8FgXTu

The protesting farmers upped the game by placing “welcome to Germany” signs and placards near the German border, symbolically making it part of the neighbouring country. And as expected the wave of protest passed the borders and now the protest looms large in Germany too. German farmers joined their Dutch counterparts in closing down the shared border region of Dutch Natura 2000.

“It is completely incomprehensible that in the middle of this far-reaching energy crisis, a sustainable domestic energy source such as biogas is being curbed in the production of electricity, heat, and biomethane,” said Bernhard Krüsken, secretary-general of the German Farmers’ Association.

The farmers rallied along the streets of Warsaw, shouting protest cries: “Enough is enough! We won’t let ourselves be robbed!” and “We workers cannot pay for the crisis created by politicians!”

If such is the trend, more countries within Europe will join the bandwagon, and it will be the endgame for the Europe Union. Brussels’ involvement in the Ukraine war and the troubles that followed is a story in itself. Adding to the injury, comes the farmer’s protest in the Netherlands. Germany and Poland have followed suit. Italy is showing signs of trouble with the government hanging in balance. Whatever it be, the European Union will endure a period of unrest like never before.