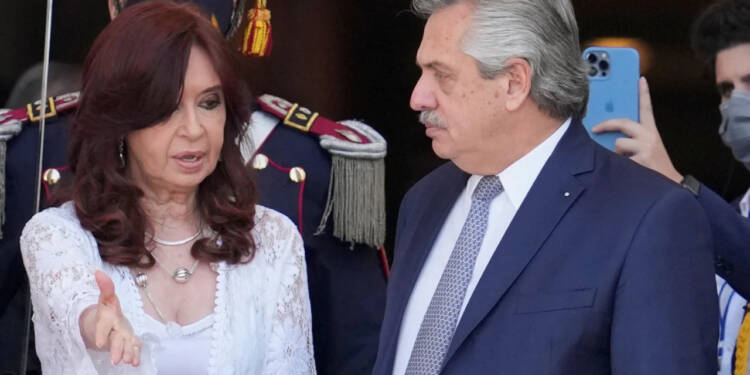 The Argentine economic structure is on the fall and a crisis of faith in the current leftwing government is on the rise. Reports of infighting between the country’s President Alberto Fernández and his Vice President, Cristina Fernández de Kirchner have paralyzed the decision-making power of the government.

To make matters worse, the creator of Argentine’s IMF program, i.e, the economy minister Martin Guzman, quit on 2nd July and was replaced by economist Silvina Batakis, who is known to be close to the powerful Vice President Cristina Fernandez de Kirchner.

Argentina, a major global seller of soybeans, corn, and wheat, has been witnessing its securities fall to historic lows, the local currency is under enormous pressure and the outflow of reserves to cater to the energy import is preventing it from ramping up crucial dollar holdings.

The global economic crisis has further fueled the misfortune of the Argentine population. Domestic inflation is on the rise and is expected to hit around a whopping 70% by the end of this year. Interest rates are being ramped up to prevent the fall of the local currency. The Central bank would surely deliberate the monetary policy to control inflation, thereby halting growth.

China’s influence in Latin American countries should not come as a surprise. Argentina is considered much of a China dove and the country doesn’t like to rely on its mighty neighbor in the North. Argentina has been a part of China’s multi-trillion-dollar Belt and Road Initiative, which includes more than $23 billion in investment and cooperation agreements. The economic failure of nations possessing huge Chinese debt has almost become a trend now with Argentina next on the list.

Chinese President Xi Jinping has a habit of forwarding loans on the pretext of export cooperation but soon uses his newfound influence in the invested country to orchestrate an economic crisis and take over the reins of the local political system to suit its needs. Several examples like Pakistan and Sri Lanka have already been a part of Xi’s plan.

Uruguay has profited from the terrible policies of the president of Argentina. Over the past two years, Uruguay, a tiny nation of only 3.4 million people, has been attracting some of richest entrepreneurs of Argentina to settle there by promising them economic stability, a tax vacation on their international income, and a more laid-back lifestyle. Reports from the Uruguayan foreign ministry indicate around 13000 Argentines looking for a residence in Uruguay.

Read More: Both UK and Argentina want India to resolve the Falkland issue

According to Ignacio Munyo, director of Uruguay’s Center of Economic and Social Reality Studies (CERES), Uruguay’s economy is expected to grow by 5% this year and become one of the fastest-growing economies in Latin America. The growth is the product of investments in the paper mill industry, train projects, and the influx of Argentine nationals mainly. The property market in Uruguay is all set to become a key driver of the country’s economy. Wealthy Argentines are setting up residences in the seaside resort of Punta del Este, thus orchestrating the influx of millions of dollars in Uruguay’s real estate sector.

Argentina has been the subject of the economic crisis in the past too but the recent political rift between the President and the Vice President has been making things worse for the nation. The upcoming election in 2023 is indicating a win for the opposition Juntos Por el Cambio coalition which is leading by a comfortable margin in the polls. Argentina is now expected to develop business-friendly policies to halt the outflow of securities from their country or else Uruguay is all set to enjoy the labor of Argentine businessmen.

Nord Stream 1 will soon see a return. Zelensky can’t help but only be infuriated