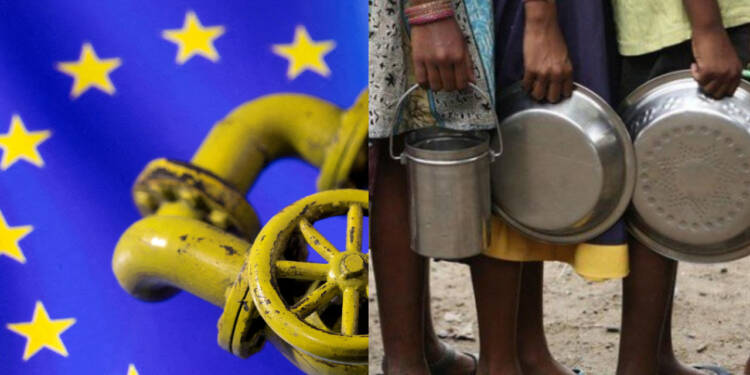 Europe has been rushing to build up stocks of oil and natural gas ahead of winters just to escape the looming gas crisis that it is much likely to encounter. Europe after imposing a series of sanctions on Russia has hit its own leg as Russia has retaliated by cutting down the gas supplies. Now, Europe is in a bid to reduce its dependence on the Russian gas supplies and otherwise scout for some viable alternatives.

European sanctions on Russia owing to its invasion of Ukraine have led Russia to slash the amount of natural gas it sends to European countries through pipelines. Europe now fears that Moscow can shut off the supplies at any moment which has led the European Union to now desperately scramble to cut off its dependence on that gas source. Europe believes that global LNG offers the only viable alternative that can be scaled up quickly.

Many developing countries have been left deprived of electricity since Ukraine faced an invasion. As these countries were dependent on the world’s supplies of liquified natural gas for generating electricity which is now being eaten up by the European nations. Europe in a bid to find a substitute for Russian gas has now resorted to snatching away other countries’ share of gas.

Europe is now posing to be that rotten apple that is rushing to just feed itself and letting other countries fend for themselves. Europe is battening down the hatches before winters arrive, leaving businesses and homes in other countries suffering hours of government-imposed electricity outages because these countries are not in a position to import enough natural gas to fuel power plants.

The cost of LNG, which can be transported globally by ship, has increased by 1900% since it peaked two years ago as a result of the Covid-19 pandemic’s lowered demand. At present rates, purchasing oil would cost more than twice as much a barrel, or $230. LNG typically trades below oil in price.

And neither do the developing nations can compete with Europe in terms of buying cargo at such prices- around $40 per million British thermal units (MMBtu)- which led the poorer countries like Brazil, Pakistan, and Bangladesh among others to cut their LNG imports. Even countries like China pulled back on purchases.

Countries like Bangladesh and India are resorting to cutting off electricity supplies for parts of the day and using more coal and domestic gas respectively. Europe is dashing to take hold of every ounce of LNG left in the store and sucking the world dry.

European countries increased their LNG imports by 49%, from the start of the year to June 19, according to data from Wood Mackenzie, an energy consulting firm. By contrast, imports by India are down 16%, China by 21%, and Pakistan by 15% over that period, it said.

Europe’s ‘a bird in the hand is worth two in the bush’ approach to seize whatever LNG is available will lead the world to a grave economic catastrophe. This act of Europe is a case in point of how thoughtful it is of its own needs at the expense of poorer countries’ basic necessities.