When it comes to Tamara Lich, Trudeau forgets all his lessons on humanity 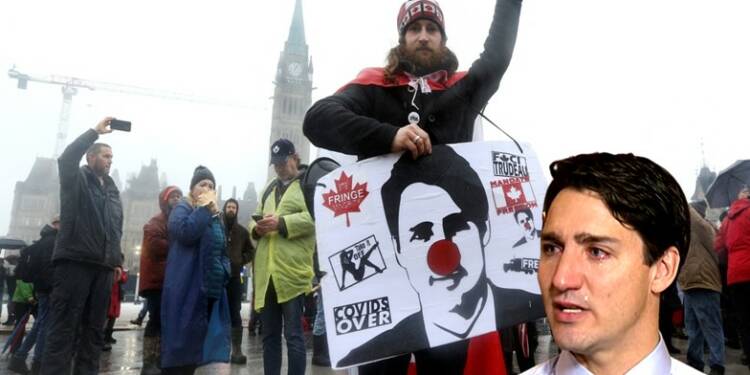 In February 2022, Ottawa was flooded by the Freedom Convoy protests. The demonstrators demanded that Canadian Prime Minister Justin Trudeau withdraw his directive requiring the COVID-19 vaccine for border crossings. In retaliation, Justin Trudeau declared a total emergency in order to clear Canada’s streets and quell the mounting unrest.

You see, Justin Trudeau has been known for being woke and quite liberal in his ideas. But, Trudeau on the mic and in the office are just as different as cheese and chalk. The Canadian PM himself never follows the idea of humanity and free speech. Just before Canada day, Freedom Convoy leader and renowned Canadian activist Tamara Lich was re-arrested in Medicine Hat. Almost fifteen days have passed, yet there is no clear indication of when she would return.

On July 8th, Canadian PM Justin Trudeau offered pro-freedom remarks to a crowd in Ottawa during the unveiling of the Humanity art installation at a city park. While promoting the group’s message regarding ‘Humanity’, the prime minister spiralled into a rant on the importance of standing up for rights, not only for one’s self but one’s family, neighbours, and countrymen.

Do not be misled; Trudeau’s address on humanity is just rhetoric. The speech comes on the same day that Tamara Lich, Trudeau’s current greatest opponent, was treated barbarically by Canadian officials.

As a part of the emergency rule, Tamara was first arrested by authorities on 17th February. But as the crackdown on the Truckers’ Convoy ended, Lich was also granted bail.  However, the Canadian courts have always been infamous for being kind to Trudeau’s regime.

Lich was given bail with the proviso that she wouldn’t use social media, and that she leaves Ottawa within 24 hours and the province of Ontario within 72 hours.

As the freedom convoy made a return on the occasion of Canada day, Tamara was re-arrested in Alberta by the Royal Canadian Mounted Police. But, the charges this time were totally different. Lich was now alleged of violating the conditions of her bail.

Lich continues to remain behind the bars. Make no mistake, the majority of Canadians are certain that Lich’s continued imprisonment is nothing but just Trudeau’s retaliation for her actions over the past few years.

Canadians seem to be quite opposed to the arrest of Tamara Lich. The most frequent response from the public is that the judges who will decide the case will be swayed by a few pro-government viewpoints.

Tamara’s prosecution was based on the most tenuous of justifications. In Trudeau’s Canada, bail is available for terrorists but not for activists.

Moreover, Trudeau’s constant power grapple is hitting his political carrier now. According to recent reports, Canadians now believe that the nation is heading in the wrong direction. Furthermore, a new survey recently showed that Canadians rate Trudeau as the worst Prime Minister of all time.

This is the present ‘sorry’ state of Canada. Canada is more divided than ever under Trudeau’s “leadership” and now people themselves are quoting that their liberties are being restricted; that the government is working against national interests, and that the economy is in shambles. Make no mistake, the fall of Trudeau is imminent.

“Henan banks, return my savings!”. Even covered in bruises, this cry of protest looms over rural China