“All modern cities of China will be attacked,” Islamic State issues its biggest-ever warning to China 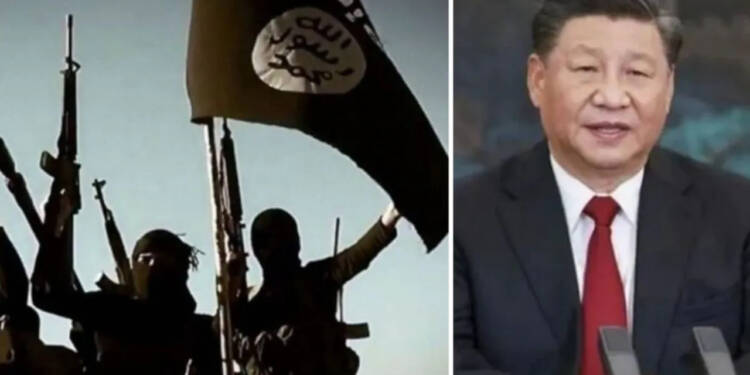 It is getting to the point where Afghanistan will soon see a fight start, not just between the ruling Taliban and the US, but between Taliban and their ideological companion, the Islamic state. Taliban snatched power vowing to eradicate all ‘non-believers’ from Afghan soil and their pursuit only got a tinge stronger after the Islamic State completely announced full backing for Taliban’s ruthless plans.

Many hold the view that the Taliban and IS are blood brothers trying to impose on the world the conventional structure of Islamic theocracy. But that is just a far-fetched idea. The continued presence of the Islamic State in Afghanistan is one reason the Taliban could receive international support from countries, including the U.S., that view Islamic State as a profound threat. So, this is a reminder that the Taliban and IS are still lock horned over trivial matters that has the scope of getting into a full-scale war in foreseeable times. Russia, China, and Iran consider Taliban as a mainstay of stability in Afghanistan—a reason they kept their Kabul embassies open after the U.S. withdrawal.

Meanwhile trudging an unusual path of development, Taliban is moving ahead with an array of infrastructure projects. Tashkent’s ambition to build a railway across Afghanistan that would connect Uzbekistan to ports in Pakistan and link Central Asia to new markets, the Turkmenistan-Afghanistan-Pakistan-India (TAPI) gas pipeline project, and a slew of baiting offers that only China can give top the list.

While Turkmenistan and other Central Asian countries received threats from the fundamentalist group, China turned out to be the new devil for the Islamic group to pounce upon. With the towering presence embossed with wealth like no other, China has promised and even went to signing papers that promised dozens of infrastructure deals.

Read more: Russia-Tajikistan-Iran have begun working on an anti-Taliban resistance

But the Islamic State of Khorasan Province (IKSP) a regional wing of the IS, is condemning every move that Taliban commits, citing it is dragging the terrorist organization into a realm of modernization far away from the ideal world that their religion suggests. And China leading Taliban to “modernisation” will invariably see the wrath of dissident forces that still exist in Afghanistan.

The latest issue of Voice of Khorasan magazine pall cast on China’s involvement in Afghanistan. And the IS in a statement promised to seek revenge for the atrocities that CHINA committed in the Xinjiang region against Uyghur Muslims should China go ahead with its projects in Kabul “The warriors of Islamic state will attack the modern cities of China to avenge the Uyghur Muslims,” Voice of Khorasan declared. Similarly, the May issue of ISKP’s new Pashto language-magazine, Khorasan Ghag, promised attacks on China and Chinese interests in Afghanistan.

“By the will of Allah, soon the Islamic State’s warriors will attack the modern cities of China to avenge the Uyghur Muslims, and similarly, very soon the blood of Iranian majoos will be shed on their streets too, provided that the flames of fire have already reached Pakistan and it is increasing and spreading day by day.” IS announced

Problems are abundant in Afghanistan and it won’t be a cakewalk for the Taliban to walk past the fury of the Islamic State in Afghanistan. IS has discerned that the Taliban’s grip on power is fading slowly with ISKP easily conducting repeated bomb blasts recently at a Sikh temple in Kabul and going away with impunity. IS will only get stronger sensing the withering power of Taliban. As for China, it will face an unusual enemy if Beijing decides to show valour by moving ahead with the infrastructure projects in Afghanistan.