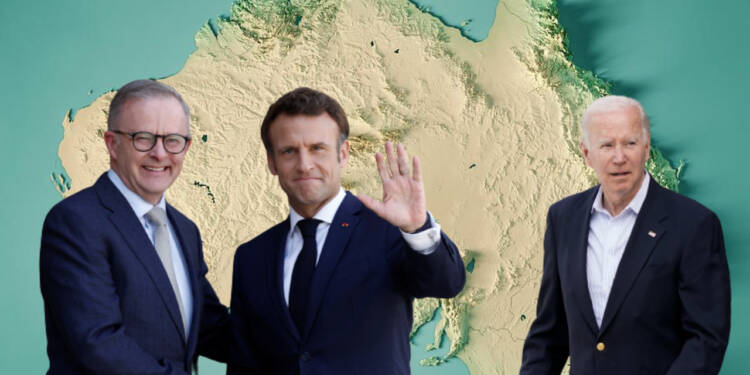 The USA’s unwillingness to take a tough stance against China has cost its relationship with Australia. Australia’s new government of Anthony Albanese has grown wary of China’s influence in the Indo-Pacific region and in retaliation to which he is now taking some anti-US steps and rolling out the red carpet for France.

Last year, the AUKUS deal was announced under Australian Prime Minister Scott Morrison in a secret agreement with Washington and London to address the growing presence of China in the Indian Ocean Region (IOR) and the East and South China Seas. Under this deal, Australia was supposed to acquire at least eight nuclear submarines.

But, ever since the Australian PM Scott Morrisson left the office, China got emboldened as the Labor party took charge of Australia after a long haul. Yet, there were questions about the position of Anthony Albanese and whether he will take a tough stance against China.

And guess what, it just happened, Anthony Albanese and his government have shown a change of heart towards the US.

Australia’s new Defense Minister Richard Marles’ has questioned the AUKUS deal with his latest remark about “hi-tech arms” being “more important” than “nuclear submarines”. The Albanese government seems to be in a huff about the ‘Submarine deals’ of AUKUS. Albanese is now harping on the provisions of the AUKUS pact.

Read More: The pro-China government of Anthony Albanese cancels the AUKUS pact with UK and US

Australia urged US to deepen ties

Recently, Australia’s Defence Minister Richard Marles urged US for closer cooperation between Australia and the United States to avoid “catastrophic failure of deterrence” in the Indo-Pacific.

Marles argued that China was engaging in the biggest military build-up since the end of World War II and the alliance between US and Australia cannot afford a “standstill.” “It will need to contribute to a more effective balance of military power, aimed at avoiding a catastrophic failure of deterrence,” he said.

Marles called out for the US to do its share and take more responsibility for the security of the region. Australia can’t let China mushroom into the Indo-Pacific region and hence have a crack on the country.

Red carpet rolled out for France

Australia is taking all pro-France steps now. He is all set to reset relations with France that got hampered once the deal of AUKUS got signed. The Australian PM recently paid a visit to France in order to mend ties with the country. Anthony Albanese met with French President Emmanuel Macron as his new Labor Government is looking forward to mending fences after a major diplomatic spat with France and relations that got strained when Australia scrapped a French submarine deal.

Well, not just this Albanese government is also planning to pay a compensation of about €555 million to the French shipbuilder over the submarine deal- valued at $40 billion in 2016 and reckoned to cost much more now – in his efforts to repair the rift. Prime Minister Anthony Albanese said the French firm had agreed to a “fair and an equitable settlement” that is intended to end a decade-old multi-billion-dollar submarine contract.

Now you might be wondering why is the Albanese government siding with France? Well, Australia in a bid to lessen China’s influence in its neighbourhood region is making efforts to form an alliance with China-hawk nations. Since France also has its skin in the game it is taking a step forward hand in glove with Australia.

Revival of the trilateral with India

Meanwhile, Australia is giving a pleasant hand to France and welcoming the nation with wide-open arms. Australia is bracing up to “revive” the trilateral with France and India. This comes amid worries over China’s aggressive posturing in the Indo-Pacific.

The trilateral had been placed on hold since the beginning of the year after France lost interest after Australia decided to back out of the submarine contract and launch AUKUS to buy nuclear-powered submarines with help from the US and UK.

But, Anthony Albanese now seems to revive that trilateral relationship calling it a “new start.” Acknowledging the “difficult times” Macron also emphasised the three countries’ strategic partnership and their cumulative interests in stability in the Indo-Pacific region.

Australia’s new government is basically trying to exercise the course correction here. It is trying to mend and strengthen ties with nations that are China hawks in a bid to prevent China from practising its expansionist policies in Australia’s neighbourhood. Ergo, ghosting China dove-Biden and joining hands with China hawk-France has become its new modus operandi.