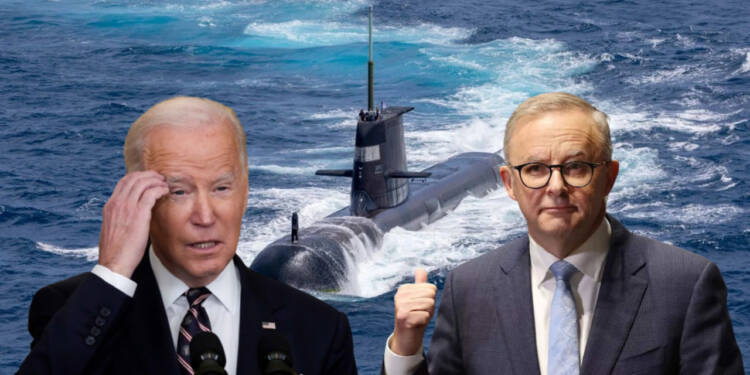 Last year, the AUKUS deal was announced under Australian Prime Minister Scott Morrison in a secret agreement with Washington and London to encounter the growing presence of China in the Indian Ocean Region (IOR) and the East and South China Seas. Under this deal, Australia was supposed to acquire at least eight nuclear submarines.

But, ever since the Australian PM Scott Morrisson left the office, China got emboldened as the Labor party took charge of Australia after a long haul. Yet, there were questions about the position of Anthony Albanese and whether he will show his pro-China intentions or not.

And guess what, it just happened, Anthony Albanese and his government have shown a change of heart towards China. This change of heart has put the entire motive of the AUKUS pact into question as Australia now seems to mend its ties with China.

Australia’s new Defense Minister Richard Marles’ has questioned the AUKUS deal with his latest remark about “hi-tech arms” being “more important” than “nuclear submarines”. The Albanese government seems to be in a huff about the ‘Submarine deals’ of AUKUS.

Defence Minister Richard Marles stresses that Hypersonic missiles, autonomous undersea vehicles, and quantum technologies should be more important for Australia’s security than the nuclear submarines that headline the AUKUS pact.

This statement caught the attention of Australian media citing this as a big statement. Furthermore, Australia questioning the provisions of the AUKUS pact comes amid the fact that Prime Minister Anthony Albanese’s administration is hell-bent to reach out to China.

It seems like Australia wants to have a completely new deal with US-UK as it wants a stopgap temporary solution of Submarines because it could possibly leave Royal Australian Navy without significant undersea capacity in near future.

But, this really presents a grim future for the Australia-United Kingdom-United States (AUKUS) pact.

Morrison had announced that nuclear submarines would be built within the country, and the construction of advanced nuclear-powered submarines involves steep learning curves, experience, and transfer of technology costs. But, the budget allocation has not been settled yet.

The Albanese government would reveal its plans for the AUKUS pact, the schedule, and the cost early in the next year, along with a decision on whether to copy the US or UK submarines or not.

Yet, given the present circumstance and sudden shift of the Albanese government, everyone seems to be highly sceptical that whether the deal will begin or not.

Furthermore, Penny Wong, Australia’s foreign minister, painted a favourable picture of China around the time these statements were made.

Recently, Penny Wong emphasized that following the first face-to-face meeting between the two nations’ foreign ministers at the G20, Canberra, and Beijing had made the “first step towards stabilizing the relationship.” This all is indeed pushing the AUKUS pact into question by the Albanese government.

The Australian government stresses that their concerns are legitimate given the fact China is gaining ground in the region where AUKUS has to be implemented. But for the long term, AUKUS is the need of the hour and nuclear missiles are far better to establish dominance.

It was anticipated that Anthony Albanese would be dovish towards China, but Albanese will push AUKUS into question was a completely unexpected move.

“All modern cities of China will be attacked,” Islamic State issues its biggest-ever warning to China