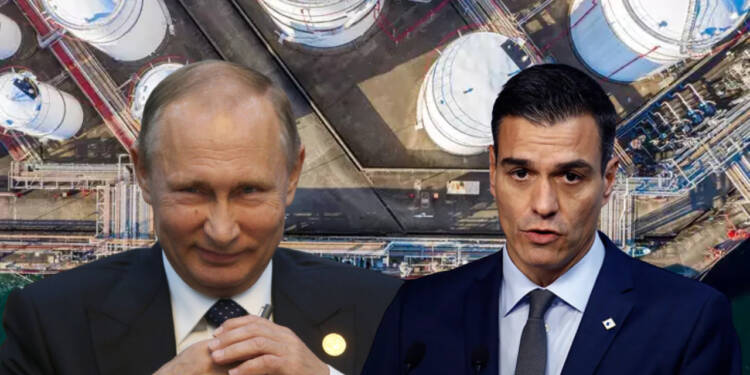 Every nation in Europe is craving Russian gas today. They want to make sure that they have enough supplies of gas before the winters knock on their doors. Russia amid this isn’t missing the opportunity of its energy dimplomacy.

Putin’s energy diplomacy has been quite successful in Spain, where, according to Bloomberg, Russia recently overtook Algeria as the traditional gas exporter to this nation to become Spain’s second-largest natural gas supplier in terms of volume. Hence turning Spain into the most Russia-dovish country in Europe.

A history of Spain and Algeria

Algeria has historically been nothing less than a blessing in disguise for European countries like Spain. The nation had been a significant gas provider and had supported the continued operation of Spain’s industries. The strategic importance of Algeria for Spain and Europe had undoubtedly significantly increased in the wake of the Russia-Ukraine war and the accompanying gas crisis.

But these relations between Spain and Algeria nosedived lately. The thorny issue of the Western Sahara dispute is the key reason for this burgeoning diplomatic crisis between the two nations.

You see, Morocco controls around 80% of the disputed Western Sahara region, and a militant group supported by Algeria controls the remaining 20%. Spain had formally acknowledged Morocco’s plan to give the area autonomy in March, which led to the diplomatic issue with Algeria.

Algeria eventually decided to renounce the 2002 friendship pact as a result of escalating tensions between the two nations. The agreement smoothed and controlled the flow of migrants from Algeria to Spain, where both parties agreed to work together on matters like immigration.

A mind game of Russia

These tensions seemed to be orchestrated by Russia. Wondering why? Obviously, Russia played strategically and increased its own supplies to Spain and reduced Spain’s dependence on Algeria. Moscow wanted to make sure that Spain had no other option but to become majorly reliant on Russian gas.

And now Russia has finally succeeded in its game plan. Russia has become the second major supplier of gas to Spain after the US.  Spain’s import of Russian gas surged twofold since May to 8,700 GWh in June 2022. This accounts for about 24% of total gas demand in Spain. Algeria accounts for 22%, with its exports to Spain declining from 9,000 GWh in May to 7,700 GWh in June of this year. “The US remains the biggest supplier, with a 30% share,” Bloomberg said.

This indeed is a big strategic victory for Russian President Vladimir Putin. Spain stood up to Russia since the onset of the Russia-Ukraine conflict. Obviously, till now the strings were pulled by the US-led western world. But eventually, as Russia makes sure that Spain’s strategic dependence on Russian gas increases, this makes Spain a staunch Russian dove as it won’t be able to take an anti-Russian stance.

Additionally, Spanish people themselves don’t like the US and recently protested NATO expansionism at a convention in Madrid. Lately in Madrid, thousands of demonstrators protested the proposed NATO conference while carrying banners depicting the hammer and sickle of the former Soviet Union. They only wished for stability and growth in the economy.

We can therefore claim that the EU has thus suffered another colossal setback at the hands of a crafty Russia as Spain’s government becomes a Russian dove, even if it is out of necessity.