‘Opportunity in crisis,’ Poland bids to turn Ukraine into its vassal state 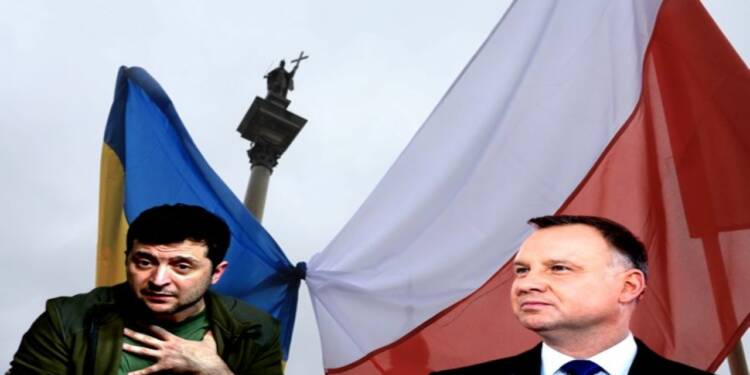 Poland has been in the news ever since the start of the Russo- Ukraine war. Leaving away the animosity it had with the EU, Warsaw adorned a leadership role within Europe, going vocal with fierce criticism of Russia over the latter’s special military operation in Ukraine.

Anyone with a reasonable understanding of geopolitics could easily gauge what was behind Poland’s sudden urge to become the new leader within the European bloc. Warsaw just wanted to belittle the EU on the global stage for freezing the COVID relaxation funds that were supposed to be given to Poland from the European Union.

Make no mistake, the close support that Poland extended to Ukraine was nothing but a hoax. At times, Warsaw has even given a hint about the real gold they were aiming for, from the eastern European conflict. Poland always wanted a confederation of states with Ukraine. In other words, Poland wants back the western Ukraine region.

You see, western Ukraine has been governed by Poland several times in history. Following the conclusion of World War I and with the Peace of Riga, Ukraine was partitioned once again between Poland and Bolshevik Russia. It is plausible to believe that, amid disputes and tensions, Poland, wishes to regain these regions, which would be of immense geostrategic importance to Poland.

And now Poland’s intention has seen a green light with the fight escalating to its end in the eastern European region. Ukraine seems to be battered and there is no helping hand visible from the West or European allies, after discerning where the tide of war is shifting. So, this is the acute time for Poland to negotiate its terms with Ukraine and they are doing it by adding a tinge of history into its narrative.

On 11th July, Poland commemorates the Volhynian massacre of 1943 to 1945, during which up to 100,000 Poles were killed in an ethnic cleansing operation led by the Ukrainian Insurgent Army (UPA). Today, most Poles regard the event as a genocide, but this is denied in Ukraine.

Speaking at a monument to the victims in Warsaw, Polish Prime Minister Mateusz Morawiecki declared that “the terrible hatred that then guided the Ukrainian hand cannot be forgotten, because there will be no reconciliation based on falsehood, based on forgetfulness, based on a lie.”

He further added, however, that the situation today offers “a great opportunity” and “a starting point for reconciliation”, because at the hands of Russia “Ukraine is experiencing this hatred, this terrible nationalism to which it succumbed itself 80 years ago”.

Finally, Poland is sensing the tides turning in its favour. With Ukraine giving away the strategically important Mariupol, it may not be too much for Poland to ask for, when it comes to a smaller portion in western Ukraine.

Poland has already posited itself as a big voice within the EU after it perfected a decisive role in supporting Ukraine in its war with Russia. In addition, the president of Ukraine has learned the fact that making it into the EU and NATO is nothing but a farce. Perhaps, Poland is a partner that Zelensky could never replace.

Back in May, Zelensky talked about Poland, “Our nations are also brothers (…) and there should be no borders or barriers between us.” He added, “The unity of our nations must last forever.”

Given the complex Warsaw-Kyiv history, these dramatic statements have certainly raised eyebrows. Poland’s President Andrzej Duda in turn said in his own speech that “the Polish–Ukrainian border should unite, not divide.” Duda had already stated that he hopes one day “there will be no border” between the two countries.

Well, Ukrainian President Volodymyr Zelensky has no time in the kitty to sit and decide which side to align with. Poland has placed a reasonable option in front of the comedian-turned-President. Don’t be surprised, if Zelensky abides by it.

A crisis-ridden Germany begs Finland to rescue the German economy