The Italian economy is on ventilator support now, even Draghi can’t save it now 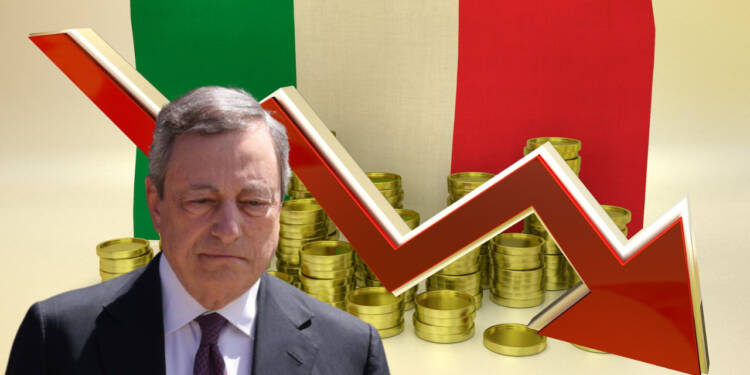 The Italian Prime Minister Mario Draghi has often been dubbed “Super Mario” in the EU after he steered European Union from the Eurozone crisis. He had gained respect across the bloc and this was one of the reasons why Draghi was elected as the Prime Minister of Italy in 2021.

But, Italy’s problem is different, the nation has been underperforming in the European Union for like two decades. However, the situation started to fall apart when COVID-19 struck and now, the Ukraine War has made things go in a complete free-fall.

The crisis is deepening and honestly, Rome’s current political crisis indicates that Draghi could not and will not save it.

Rome’s economy is in shambles

Firstly, let’s understand why Italians are already struggling to keep their heads above water and things might get even worse in the near future.

Italy’s economic output fell nearly 9 per cent during 2020, it rebounded by over 7 per cent last year and was poised for above-average growth this year. But, the war spoiled expectations, the squeezed supply chains, and energy price spikes changed that outlook drastically.

As a repercussion, Brussels slashed Rome’s forecasts for 2022 GDP growth to 2.4 per cent, down from the 4.1 per cent previously expected.

But, is that it? Absolutely no. That’s just a drop in the ocean of Italy’s economic crisis. The real issue is massive.  Italy is heading into a debt crisis, just like the one it suffered exactly a decade ago. The root cause behind this debt crisis is Rome’s lack of economic development.

Whopping debt worth 2.5 trillion euro is piled on Italy’s economy. This debt is quite big enough to bring down the rest of the eurozone as the amount is larger than those of Greece, Portugal, Ireland, and Spain combined. The debt is too big for a bailout. Furthermore, Italy’s GDP per capita is also the lowest in 20 years.

Italy’s reluctance to reform any of the major sectors in the last decade. And its reform in pension systems, labour market, and product regulations devolved a ‘luxurious’ economy to tatters.

Under stress and with financial assistance from foreign lenders, Portugal’s budget was fixed, Spain and Ireland’s banking institutions were cleaned up, and even Greece implemented reforms to its product rules, pension systems, and labour markets. The same could not happen with Italy.

The investors are raising questions about whether Italy can continue to roll over its public debts that soared during the pandemic and are now becoming more expensive to refinance as the ECB prepares to raise interest rates.

Read More: Draghi is considering declaring a state of emergency in Italy to stay in power forever

The downward trend, even before Draghi

Well, the Italian Economy has always been a knotty problem. The peripheries became more visible in the last decades when several unknown issues erupted nationwide.

The amount of economic output produced in Italy per hour stopped expanding in the 1990s and has subsequently decreased.

Behind this, it was a complex web of issues, including a fast ageing population, a low-skilled workforce, suffocating red tape, a sluggish and broken justice system, and persistent underinvestment in infrastructure, education, and emerging technologies.

If not all, some Eurozone nations obviously struggle with some of the issues mentioned above, Italy suffers from all. And what’s more saddening is that these issues were not even resolved by ‘Super Mario’ himself.

Read More: Not only Germany, Winters may not be good for the old Russian pal — Italy

Not evolving with the time pushed the Italian economy into underperformance. Even Italians also acknowledge that Italy adopted the wrong growth model.

Now, the situation is beyond the state of repair and even Draghi did nothing in his tenure to resolve any of the issues. Even if he vows to resolve it now, the political crisis won’t let him.