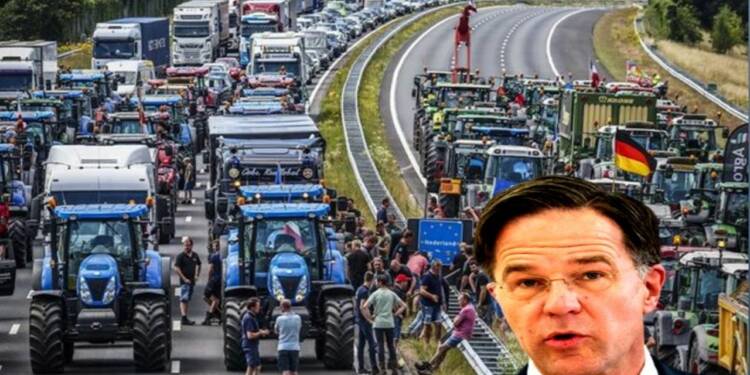 But the government in the Netherlands failed to gauge the after-effects such a move could create. The resistance was swift from the farmers as thousands of them steered their vehicles to block the national highways and other angry Dutch farmers brought their cows to Parliament, threatening to slaughter them in protest of the government’s nitrogen reduction targets.

The country has the highest density of livestock in Europe —more than four times that of the UK or France — with more than 100 million cattle, chickens, and pigs in total.

At a time when the protests are getting fiercer every day, a reputed scientist in the Netherlands has made a big claim that has everything in it to spark a controversy. Jaap Hanekamp, an associate professor of chemistry at University College Roosevelt in the Netherlands, made a slew of revelations that will bring into open the hoax being carried out by the Dutch government in the name of reforms.

“We now treat farmers as polluters, end of the story, which is a very strange perspective. Nitrogen chemicals are nutrients—you need them for growing plants,” Hanekamp said.

Hanekamp believes that in the busy run to exclude nitrogen, the government in the Netherlands has kept a blind eye on many other factors that would dampen nature, such as the location of groundwater relative to the surface.

Read more:Protesting farmers in Netherlands wave German flags—It is the endgame for the EU

He also shed light on the reality that the Netherlands is a land that is far from the pristine wilderness. Much of the land is artificial, reclaimed from the sea over recent centuries, thanks to the ingenuity of man.

In a recent paper, Hanekamp and coauthor William Briggs described some problems with the evidence used to define nitrogen critical loads in the Netherlands.

For one thing, they do not believe the definitions of nitrogen critical loads are sufficiently precise. In addition, they think there have not been enough large-scale, long-term studies on nitrogen deposition.

But the condescending attitude of the Dutch government is not allowing them to pay heed to the findings of the scientists in the Netherlands. They are moving ahead, with the Dutch nitrogen minister unveiling detailed, area-specific nitrogen reduction targets in July of this year.

The target, designed to comply with European Union rules on reducing nitrogen pollution, will require cuts of as much as 95% in emissions in some provinces, official data showed.

You see, the Netherlands is the second-largest exporter of agricultural products, with estimated exports of 104.7 billion euros ($111 billion) in 2021, according to Wageningen University.

“Yeah, we [would] know that one-third of the farmers [are] gone and that basically, we’re reducing production and income as a country, but the return of investment in the focused nature? We have no idea,” Hanekamp concluded.

Make no mistake, if the government moves ahead, regardless of the findings from scientists, it will trigger more protests in the Netherlands and it won’t be peaceful this time.