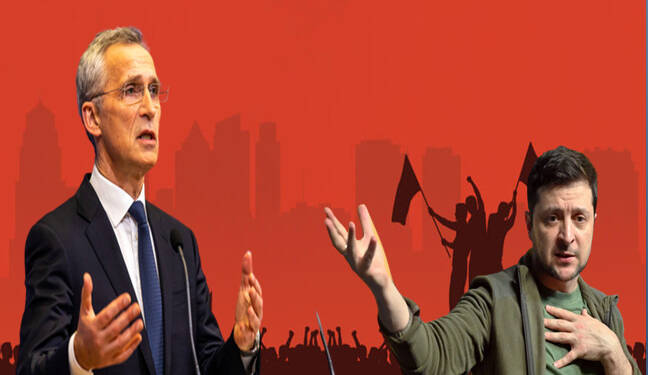 When Europe decided to impose sanctions on Russia the very first day of the Ukraine-Russia conflict, it hardly knew it had embarked on a suicidal journey. Today, both its coffers and its gas reserves are empty. The European nations are pretty damned as the crisis has escalated to the levels of bankruptcy.

However, NATO is entirely ignorant of this truth. It holds that the EU can and should finance Ukraine and ought to support Zelensky to restore Ukraine’s sovereignty. But this indeed will trigger civil unrest in every nook and corner of Europe.

The Nord Stream 1 pipeline was shut down this month for annual maintenance by Russia’s largest gas supplier, Gazprom. The pipeline has remained one of the main routes for supplying gas from the Russian Federation to Europe.

German officials have expressed fear that Russia might not start selling gas to Europe at full capacity knowingly as long as the threat of conflict looms over the region. Plans for “gas rationing” are in the works as a result of the country’s declining gas reserves.

You see, other European countries, including Italy, France, Slovakia, etc are in a similar position. Despite this, NATO’s chief, Jens Stoltenberg, is acting deaf and dumb. Amid all this chaos, Stoltenberg is still emphasising that the EU should stop whining and assist Ukraine in rebuilding and thwarting Russia.

In May 2022, the EU proposed offering a loan of 9 billion euros, about $9.5 billion, in financial assistance to Ukraine. But, the present conditions indicate that the EU may not sanction even a single penny to Ukraine because its own coffers have started to run dry.

As per Bloomberg, European energy and utility companies are racking up more debt to cover the cost of soaring oil and gas prices. The Debt has swelled to more than 1.7 trillion euros ($1.7 trillion).

Furthermore, Oil companies like Uniper have started to ask for a bailout from the government as the incurring loss has almost tripled.  So, the EU is trying to buy time against rebuilding Ukraine. The commission has raised an alarm that funding at this moment would generate economic fatigue among Europeans.

But, NATO is not ready to accept the demands of the European Union. The NATO secretary general, Jens Stoltenberg has reportedly chastised European Union.

Stoltenberg has reportedly ordered a legislative body of the European Union to “stop complaining” and take action to support Ukraine during the ongoing war with Russia.

While speaking about the European Parliament, Stoltenberg said that EU member states must financially support the country as it fends off attacks from the Russian Army. He further stressed that not helping Ukraine could put Europe in danger in the long term.

Stoltenberg furthermore added, “It is in our interest to help Ukraine because you(EU)  have to understand that if Ukraine loses this, that’s a danger for us,”

NATO has now made it apparent that the EU’s only choice is to save Ukraine. Germany has, however, issued a warning that NATO’s plot would inevitably ignite civil wars all over the Eurozone.

Civil War in the European Union

Germany’s Interior Minister Nancy Faeser has already issued a warning about potential protests brought on by the nation’s skyrocketing energy prices. The interior minister said in a statement to the media that there is an increasing “risk” that certain extremist organisations could use the rising cost of fuel as a “new mobilisation topic” for protest.

And undoubtedly, civil unrests have already begun to unfold in many parts of the European continent. There were protests in Poland in June as fuel prices reached a new high. Car owners reportedly blocked the petrol pump to show their discontent against the Polish Government.

Additionally, cost of living protests broke out in cities all across Ireland as a result of the inflation rate rising to its highest level since the 1980s. Protests were also held in Rome, Paris, and Belgium.

Furthermore, the recent actions taken by their respective governments have failed to please the public. Also, the approval ratings of many European leaders have reached a historic low. Indeed, the war has taken a heavy toll upon Europe’s political stability.

Nevertheless, NATO has turned itself into an ostrich, it has buried its head under the sand, despite knowing the fact that European Union is not in a position to fund Ukraine anymore. As impossible as it may seem, Europeans’ discontent is approaching its pinnacle, and if things continue to escalate, a full-fledged civil war may break out in the EU anytime soon.

Collection of 35 No one understands me quotes

Collection of 38 Bliss quotes and captions