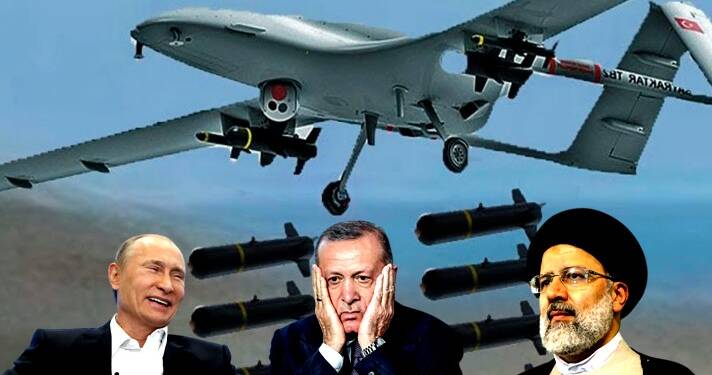 For the second time after the Ukraine war in February, Russian President Vladimir Putin visited a country outside the Soviet Union, and the rare visit is now all news.

Amidst the western sanctions, Putin intently zeroed on Iran to be the best ally to have talks with. On Tuesday, Putin arrived in Iran and held talks with Supreme Leader Ayatollah Ali Khamenei. The Russian leader Putin was all business in his trip and won staunch support from Iran on Tuesday for his country’s military campaign in Ukraine, with Supreme Leader Ali Khamenei saying the West opposes an “independent and strong” Russia.

On the surface, Putin’s visit to Tehran was nothing but a trip to secure a deal between The National Iranian Oil Company (NIOC) and Russian gas producer Gazprom (GAZP.MM). A memorandum of understanding worth around $40 billion was also inked in the meeting. So, only the big talks of Syria, oil deals, and US sanctions gained space in newsrooms that dedicated a full day to airing Putin’s sudden flight to Tehran. Not stopping there, the meeting was also filled with its share of quirkiness, thanks to Turkish President Recep Tayyip Erdogan.

Footage taken ahead of the meeting on Tuesday shows Putin fidgeting, shifting his weight, and pulling a series of uncomfortable faces in front of cameras for nearly a minute after the Turkish president kept the Russian leader waiting. Some in the Turkish media speculated if Erdogan had kept Putin waiting as “payback” for a 2020 meeting in Moscow when he was left waiting by the Russian President for about two minutes before a meeting.

The media made a big mountain of this issue,  with popular portals penning 1000-word op-eds on how this was a strategic victory for Erdogan and how Putin looked vulnerable after facing a near defeat in Ukraine. In reality, the Russian leader won’t give a fig about waiting for a minute or two for the Turkish President since the whole trip was indeed devoted to humiliating Turkey.

You see, the oil deal signed in Tehran was just a prelude to something big that the media never got into. VLADIMIR PUTIN has been handed a massive boost as Iran is “ready” to export military equipment to the Russian troops in Ukraine. The provision of military equipment would come as a blow to the Western nations, who attempted to isolate Russia on the world stage through a series of sanctions, even at the expense of their own economies.

Last week, Iranian officials were said to be preparing to send “several hundreds of drones” to Russia for use in the Ukraine war. Its army ground forces commander KiumarsHeydari has now added “we are ready to export military equipment and weapons”.

According to National Security Adviser Jake Sullivan, Russian officials visited Iran twice in the past month to view Iranian unmanned aerial vehicles, including the Shahed-191 and Shahed-129, which are capable of carrying precision-guided missiles and are somewhat similar in design to American Predator drones.

A Visit to Humiliate Turkey

But the news is not just circling Ukraine. Just two days back, the CEO of Turkey’s Baykar, which makes the Bayraktar drones, ruled out supplying the Bayraktar TB2 to Moscow. When repeatedly pressed by CNN media for an answer, Haluk Bayraktar replied, “We have not delivered or supplied them with anything, [and] we will as well never do such a thing because we support Ukraine, support its sovereignty, its resistance for its independence.”

When you combine this remark with the Iranian weapons deal, you can deduce Moscow’s covert strategy. Putin made a visit to Tehran and asked Turkey to be part of the meeting just to make a deal with Iran on lethal drones in front of Erdogan’s presence. The oil deal was indeed significant but it was more of a red herring to divert the world from the weapons deal with Iran.

Putin’s sly warning to Turkey is not just for Ukraine, but also for its proposed manoeuvres in Syria. Iran also has a debt to pay Erdogan for the intrusive attempts they practised in the Kurdish oil bastion in northern Iraq, where Iran has a larger presence.

Read more: Russia is preparing to send a huge migrant wave to Turkey that will wreak havoc on Erdogan

Ankara has been on cloud nine, gloating about the efficacy of its drones. But Iran’s new lethal exports to Moscow have everything in it that should concern Erdogan’s prized Bayraktar. Tehran’s drone arsenal has emerged as an increasingly lethal enterprise for the Iranian Revolutionary Guard Corps (IRGC). While the regime has prioritized the expansion and development of its ballistic missile program in recent years, additional focus has been placed on its drone development. Its steady production of advanced drones is equally menacing.

Make no mistake, the Tehran trip was nothing but a well-orchestrated move from both Iran and Russia to humiliate Turkey on the global stage. But sadly, enough Erdogan stays far from this truth and is still thinking about the loud claps he received for making Putin wait for 50 seconds.

A Collection of 26 Florida Quotes From Famous People