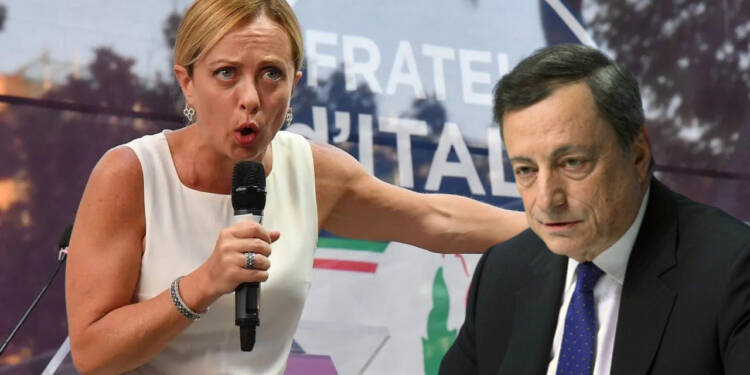 ‘Super Mario’ is gone. Yesterday, Italian PM Mario Draghi accepted his fate and at last, left the Chigi Palace along with his resignation. With this, Italy is poised to hold elections for a new government on 25th September 2022.

These elections are going to set a new precedent for Europe. Years of bonhomie between Brussels and Rome may come to an end because Italy’s next prime minister is someone the EU never wanted.

On 21st July, Italian PM Draghi resigned following the collapse of his national unity government. However, he will remain in office with the caretaker role. But for now, Italy is poised to have elections on 25th September.

This is for the first time in 100 years that there will be elections in autumn. Well, amid growing inflation and Russia’s conflict in Ukraine, the fall of Draghi’s coalition in the third-largest economy in the eurozone was quite certain.

People were not happy with the events that unfolded in aftermath of the Ukraine war and this is visible in several opinions that indicate that there was anti-incumbency against Draghi’s 5-star coalition. Italians are now looking to induct a far-right conservatist in place of Mario Draghi, and this is surely going to be really bad news for the West and EU, in particular.

Giorgia Meloni could be the next PM of Italy?

Meet her, she is Giorgia Meloni, who founded the right-wing Brothers of Italy party along with other RW politicians in 2012. She has been a vocal critic of the 5-star coalition and she is the leading candidate for Prime-Ministership in Italy.

For the first time since 2008, Conservatives are ahead in Italian elections. Brothers of Italy along with other conservative parties lead ahead in the opinion polls. According to a survey by the YouTrend and Cattaneo Zanetto & Co., the Giorgia Meloni-led coalition of the League party, Forza Italia, and Brothers of Italy could win 221 seats out of 400 in the Lower House and 108 out of 200 in the Senate.

In addition, Meloni’s party is currently ahead with the support of over 22% of voters. The chances of her victory in early elections are highly likely. With this, she could become the first woman to hold the top job.

Her victory and the return of conservatives in Italy could mark the end of Bonhomie between the EU and Italy.

Read More: Now, Italy begins backtracking on its promises and extending an olive branch toward Russia

Giorgia Meloni could be a nightmare

Ever since the start of the war, the EU has blindly followed the tone of NATO and the US to provide help to Ukraine. But, due to this their economies have taken a toll. Italy, in particular under Draghi, has suffered badly. With Giorgia Meloni, the scenario might change.

Giorgia Meloni’s election as Prime Minister would be a nightmare for European Union. Unlike Draghi, Meloni has been a vocal critic of most of the EU policies. Giorgia Meloni as president of the European Conservatives and Reformists (ECR) party became the face of Europe’s far-right abroad.

Giorgia Meloni has been a vocal critic of the EU’s migration policy and has constantly backed calls for a zero-tolerance policy on illegal migration.

In 2020, Giorgia Meloni slammed Germany for Euro Cash demands and stressed that she’s taking a page from U.S. President Donald Trump in her campaign to put her country’s interests first.

But where it gets interesting is that she has a very different line on Russia. In recent times, she definitely chastised Russian aggression in Ukraine, but has she always been Anti-Russia? Absolutely not.

Meloni was one of the few Italian politicians to congratulate Russian President Vladimir Putin on his re-election in 2018.

Giorgia Meloni would emphasize a more pragmatic approach towards the EU and Ukraine given the rising anti-Ukraine attitude in Italy, where an Ipsos survey indicates that more than half of Italians reject providing aid to Ukraine. It is highly likely that Meloni won’t allow more inflows of aid into Ukraine.

Read More: Not only Germany, Winters may not be good for the old Russian pal — Italy

So, in the next 65 days, Italy might be seeing a return of Conservatives back to power. Hence, relations with Russia may improve during Meloni’s tenure. She would also undoubtedly boost EU’s conservative bloc and that would be a nightmare for the liberal EU at that point.

All conservative voices in Canada to be banned soon!