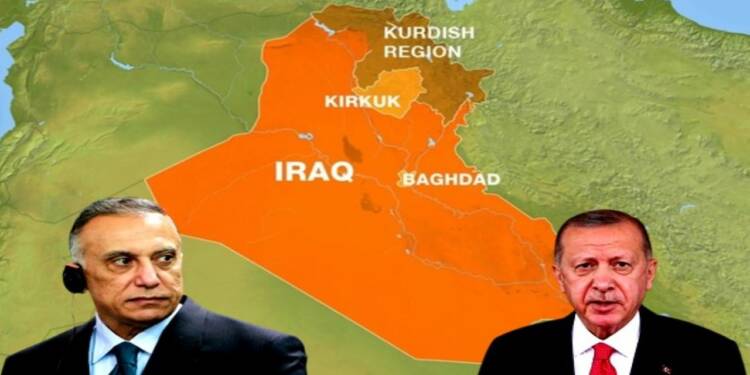 It took just two days for Turkey to flaunt its real rogue side after keeping a well-behaved outlook at the trilateral meeting that took place in Tehran. Vladimir Putin, on Tuesday, touched down in Tehran in a rare visit — his second outside Russia,  since the Ukraine war. Turkey was also part of the meeting and the discussion delved into matters pertaining to Syria and Iraq.

But it seems that Turkish President Recep Tayyip Erdogan was just facetious in his approach. Just two days after the big talks of camaraderie between these three countries, Ankara dashed all niceties of diplomacy by going for an artillery attack, on Wednesday, that hit a village of Parakh in Zakho district in the Kurdistan autonomous region in Iraq. Nine civilians died in the Turkish offensive according to Iraqi officials.

The victims, two of whom were children, were tourists visiting a leisure park in the hill village of Parakh in Zakho district, according to Iraqi state media.

Turkey’s animosity with Iraq is well known in geopolitical circles. Ankara has been long salivating over the northern Iraq region that is under Kurdish hands. Sinjar in northern Iraq has been a hotbed for the Turkish offensive for all these years. The region is a treasure trove with untapped reserves of oil, grabbing eyes from all around the world. Ankara, in the garb of security concerns, has been trying its luck to outgun the Kurdish dominance in this region.

However, much has changed since the Iran-Iraq war. Political leaders in Iraq are ideologically affiliated with Iran, while the US has sought to shape Iraq in its own image with free elections and a liberal political system, coupled with economic ties with western energy firms. But nothing fruitful happened with the US attempts when it came to disengaging Iraq from Iran.

Iraq’s Prime Minister, Mustafa al-Kadhimi, received some of the bodies at Baghdad airport as anger mounted in the Iraqi capital and in Karbala, the Shia shrine city in central Iraq, where many of the victims were from.

“Turkish forces have perpetrated once more a flagrant violation of Iraqi sovereignty,” Kadhemi said. He condemned the harm caused to “the life and security of Iraqi citizens,” and said Iraq may hit back.

“Iraq reserves the right to retaliate against these aggressions and take all necessary measures to protect our people,” the prime minister said. He dispatched a delegation to the area led by Foreign Minister Fuad Hussein and ordered an investigation into the attack.

Read more: Turkey wanted to break out of Iran’s gas trap in Iraq, but failed miserably

This is a strange diversion of Baghdad’s diplomacy that usually harboured a soft approach to Turkish shenanigans in northern Iraq which in turn helped Baghdad fight the PKK groups, that the former accuses of subverting its authority.

The whole episode of condemnation from Iraq has puzzled Ankara. Make no mistake, Iraq adopting fierce rhetoric is not an orthodox Iraqi way of diplomacy with Ankara. Turkish President Recep Tayyip Erdogan has all good reasons to fear since it is not just Baghdad but it will be its loyal friend in Iran who will be more irate at Turkey’s manoeuvres in Iraq.