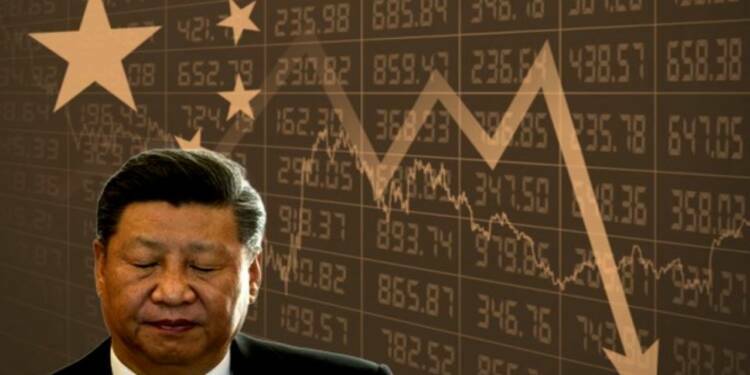 The hullabaloo over China’s economic power is coming to an end. The already torn economy of China because of the Zero-Covid policy has seen fundamental changes in the last few days which will script the end of China’s rising dominance.

The gargantuan hidden debts of the Chinese economy have started being noticed. And China’s economic future looks to be heading to darkness.

According to the researcher China Real Estate Information Corp, as of Wednesday, mortgage payments have been halted on at least 100 projects in more than 50 locations. According to experts at Jefferies Financial Group Inc., including Shujin Chen, that is an increase from the 58 projects on Tuesday and the 28 projects on Monday.

As authorities scramble to prevent a crisis of confidence in the housing market from upending the second-largest economy in the world, China may permit homeowners to temporarily halt mortgage payments on stalled property projects without incurring penalties, according to people familiar with the situation.

The property crisis would lead to several banks going into debt. To prevent bankruptcy, authorities are denying Henan citizens the right to withdraw their own money to fund real estate mortgages. But, granting house purchasers in delayed projects a temporary payment holiday would cost Chinese banks 31 billion yuan ($4.6 billion) in interest income from mortgages.

According to analysts led by Judy Zhang, the amount equates to around 1.2 per cent of the banking industry’s projected net profit for 2023, assuming 561 billion yuan in house loans will be in danger if Beijing approves the proposal of halt.

Only 2.1 billion yuan ($311 million) of credit has been revealed as being in danger by the mortgage boycott so far, despite the fact that companies like Jefferies Financial Group Inc. estimate that at least 388 billion yuan might be affected. A total of 13 trillion yuan in loans to the country’s struggling developers and 38 trillion yuan in outstanding household mortgages are held by lenders.

Make no mistake, 13 trillion yuan and 38 trillion yuan are huge sums which will lead to several small banks going bankrupt in China. As more homeowners join a national boycott of mortgage payments on unfinished houses, Zhengzhou is setting up a rescue fund for real estate developers.

China’s debt is already more than 250 per cent of GDP, and if small banks are bankrupt, the large banks won’t be able to save them either. Large banks have already given loans for infrastructure projects for China’s Belt and Road Initiative (BRI). BRI, which was seen as a project that’ll be the reason for China’s stature in geopolitics, has largely been stalled because of COVID-19 and other reasons. China’s CPEC project is increasingly becoming unaffordable because of local resistance in Pakistan. Countries which had earlier signed for BRI have become apprehensive of China’s intentions and China’s debt trap policy.

Few other things have taken place in the last few days which can undermine China’s economy forever.

U.S. Securities and Exchange Commission Chair Gary Gensler says it’s uncertain whether American and Chinese officials will come to an agreement to prevent the delisting of some 200 companies on US stock markets. He asserts that China must provide investigators access to its auditing records. China’s aggressive approach towards Taiwan over Nancy Pelosi’s visit may lead the US to delist Chinese companies from its stock markets. Such a step will incur huge losses for China.

Furthermore, Macau had six times more gaming revenue in 2019 than Las Vegas did. As the Chinese-controlled area struggles with the consequences of Beijing’s “Covid-zero” policy, which aims to eradicate the pandemic at all costs, the Nevada gaming hub has surpassed its Asian competitor this year. In recent weeks, Macau’s gambling floors have been deserted and its slot machines have stopped spinning as the enclave has been placed under lockdown to contain its largest Covid-19 epidemic.

According to a Bloomberg survey of experts, this comes on top of months of virus restrictions in China, which have contributed to the city’s six licenced casino operators suffering an estimated combined loss for the second quarter of $478 million. In contrast, as the US attempts to live with the epidemic, commerce is thriving in the Nevada desert.

Meanwhile, a report by Bloomberg also suggested how rich Chinese are looking to leave the country. 10,000 high-net-worth citizens are seeking to pull out $48 billion from China this year — the second-largest predicted wealth and people outflow for a country after Russia.

To be clear, these economic struggles are like a drop in the ocean. China’s debt has increased to such levels that it may soon trigger a financial crisis and an economic downturn.