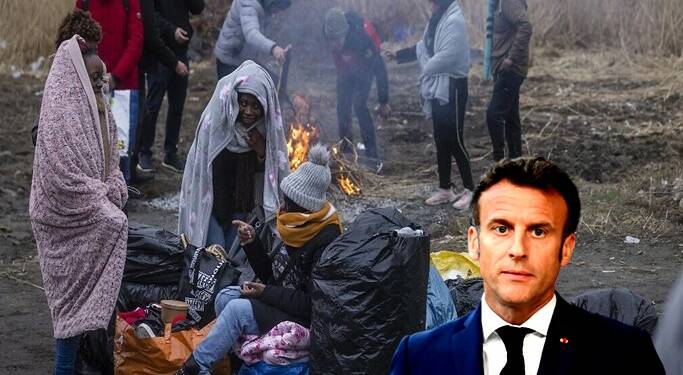 Europe is rapidly turning into the world’s most chaotic region. European leaders’ support to prolong the war in Ukraine has truly come to bite them in the back. The severe food and energy crisis that arose due to the disruption of supply routes has triggered a mass migration of people from many parts of Africa in search of a better livelihood. And that is what precisely is giving nightmares to French President Emmanuel Macron.

France has been a major partner of Washington in supporting Ukraine in its aggression against Russia. As a result, the world also expects Macron to house and feed the huge wave of migrants coming in from the war-torn cities of Ukraine.

However, it does seem like Paris did not calculate the severity of the crisis that would unfold. Grain exports from Ukraine, one of the top producers in the world, have been reduced by about two-thirds as a result of the Russian invasion. This has created a serious threat to food security in Africa.

Several cases of violent crime and extreme poverty due to the undersupply of grain are being reported. Many European countries, especially those bordering the Mediterranean Sea like Spain, are concerned that this may cause a sharp increase in migration from the continent of Africa.

The crisis, however, has spread to many parts of Europe, including France, and the problems are now piling up for Macron. Ukrainian and African migrants seem to hold European nations like France accountable for their misery.

Make no mistake, the crisis is dominantly fabricated by Zelensky’s refusal to unblock Kyiv’s southern ports. The European nations also reportedly stockpiled the reserves meant for Africa and encouraged the conditions to deteriorate further.

Well, now Macron seems to be in deep water and it looks like he is struggling to stay on the surface. The refugee camp set up to host Ukrainians leaving the war zone was recently invaded and occupied by a sizable group of African migrants in Paris. The organization reportedly asked for residency rights and demanded adequate housing for all.

Normally, the African migrants would have received a sound verbal bashing from nationalist groups. But the hardships of the migrants can largely be blamed on the negligence of the European countries towards underdeveloped countries in Africa.

The organizers of the protest argued that the Ukrainian refugees were receiving preferential treatment, being provided housing and resources, while the African migrants were left behind, thereby blaming Macron for promoting racial discrimination.

US President Biden and his allies’ attempt to prolong the war has already forced many innocent Ukrainian women to become prey to sex trafficking and has left scars on families for a lifetime. Africa, on the other hand, is hit by its worst food crisis in a decade.

Furthermore, Western leaders are already facing a civil war-like situation amid rising energy and food commodity prices. The record high inflation and threats of energy rationing have tensed the local populace, who are now on the verge of revolt.

It is quite ironic that the very leaders who attempted to dethrone Putin are now the subject of falling approval ratings. Leaders of some big European powers like the United Kingdom and Italy have already lost their chairs as a consequence of supporting the clown President of Ukraine.

The words of Vera Nazarian apply perfectly to the fate of the West — “A boomerang returns back to the person that throws it.”