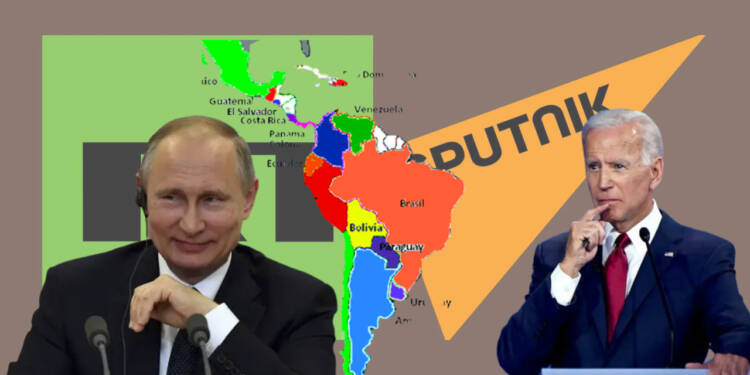 As of now, the Western media has only one enemy i.e. Russia. According to them, the Russian President is one of the most dangerous people to have ever existed, and he is to be blamed for the majority of the world’s problems. But, the recent battle of narrative has completely destroyed the Western narrative.

People have started to debunk the western agenda and accept the Russian narrative on a broader scale, this is seen in Africa, Central Asia, and even in Europe. But now, the battle of narrative has reached the neighborhood of the USA, and liberal elites just can’t help it.

The Russia-Ukraine war is not only a battle of two nations, it is also a battle of two narratives that have clashed with each other time-to-time.  The west has consistently criticized Russia and its leadership through the media in an effort to malign Russian actions.

Russia, however, apprehends the Western agenda and completely subverts it. In most regions of the world, Russia has recently begun to expand its narrative. As per media reports, Russia has plans to open RT and Sputnik in regional languages.

This is alarming for the liberal elites because expansion of the Russian media means more difficulty in setting up their agenda. But, the truth is the west can’t stop the expansion. Now, the Russian narrative expansion has started to knock on the doors of US’ backyard.

Is US scared of the Russian Agenda?

The Russian narrative has started to grip Latin America and even the Spanish-speaking community in the USA.

As per the letter, the three senators stresses: “We … know that disinformation campaigns by Russian state media’s Spanish-language outlets targeted at Latin American and Caribbean audiences regularly reach Spanish-speaking communities in the United States, directly harming our national interests,”

The US appears to be worried that Russian media may ‘brainwash’ the minds of millions of people in Latin America and thereby lessen the US’ power in the region of the world.

And, considering that many Latin American nations are losing trust in their relations with the US and are doing everything they can to demonstrate their dissatisfaction, Russian influence definitely has the upper hand in this circumstance.

Read More: Is Russia planning to turn Latin America into its own Alaska in its fight against the US?

The clout of Russia Expands

A loss for the US in its own ‘backyard’ is always a win-win situation for Russia. If one remembers correctly, nations like Cuba, Venezuela, Colombia, Mexico, and Brazil have openly embraced relations with Russia.

Even after the Ukraine war, they never fell for the agenda of US Media conglomerates like CNN or even CBC. Not a single country from the Latin American region even imposed economic sanctions on Russia.

Not only this, but Russia is also getting militarily active in these nations. The Latin American country has extensive Russian-made military equipment, including Sukhoi fighter jets, helicopters, missile defense systems, and tanks.

So, the US narrative was already under criticism in Latin America, and possibly the Russian media is now fueling the suspicion even further.

The US senators are concerned and are urging measures to lessen the Russian influence because Putin has already become a highly popular choice among the locals in Latin America due to their dislike for the USA.

However, the truth is that Russian media’s growth currently appears to be unstoppable. To completely undermine the Western agenda, Russia aims to upgrade its capabilities and develop regional channels. Therefore, the US simply cannot stop shitting bricks.