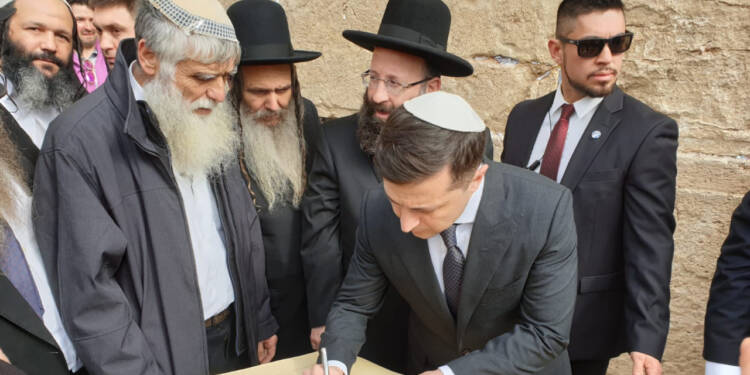 The Ukrainian President Volodymyr Zelensky is a Jew. For those who don’t know, members of his family were murdered during the Hitler Holocaust and some also fought for the Red Army against Nazis. However, Zelensky is a totally different case.

The Ukrainian President not only sympathises with certain Nazis, but also has friendly ties with some neo-Nazi troops such as the ‘Azov Battalion.’ This is the same Battalion that surrendered to Russia in battle of Mariupol.

However, despite having ties with Neo-nazis, Zelensky never did anything that was Anti-Jewish. But now, Zelensky is in a probable mood to go against people of his own community, just to stay in power.

Volodymyr Zelensky is losing the battle of Ukraine. When the war started, the Ukrainian President had the support of many army veterans and forces and among them was the support of the ‘Neo-Nazi’ Azov Battalion.

The Azov Battalion is one of the most neo nazis groups in Ukraine. The Azovs are hardcore Nazis and they follow Anti-semitism to the core. There have been countless reports and images that show Azov’s crush on Nazism.

Despite being a jew, Zelensky embraced the Azov battalion, as they were ripping Russian forces apart. The Ukrainian President even attempted to legitimize the Battalion by rebranding them within the Ukrainian military.

However, as the battle of Mariupol came to an unfortunate end for Ukraine, the Azov Battalion was forced to surrender as Zelensky provided no support to the forces. The Battalion troops were forced into exile as a result.

Now, Russian advances have stirred up unrest in Kyiv, and Zelensky is now attempting every trick in the book to stay in power. Now, Zelensky has opened up a new front against Jews to recall the Azov battalion back in the war.

The Ukrainian President Volodymyr Zelensky has started to revoke the Ukrainian citizenship of two of the country’s best-known oligarchs, Igor Kolomoisky and Hennadiy Korban, as well as that of Vadim Rabinovich, a former tycoon turned opposition lawmaker.

These three men are one of the most influential Jews in Ukraine. The oligarchs have aggressively funded Jewish infrastructure projects, particularly in the Chabad-Lubavitch heartland of Dnipro. Hennadiy Korban, the famous oligarch, was denied entry into Ukraine at a border checkpoint, and his Ukrainian passport was confiscated.

This action has led to a rare backlash against the Ukrainian president Zelensky among Jews. There is now a fear amongst Jewish people that Zelensky might even revoke the citizenship of 8,000 Ukrainians with Israeli citizenship.

However, Kyiv is stressing that Zelensky has revoked Ukrainian citizenship on purpose. Kyiv stresses that holding double citizenship is technically illegal in Ukraine and this has been done to reduce the rising corruption within the nation. But, the reality is exact opposite.

The Jewish President is turning against people of his own community just to please Azov Battalion in a bid to stay in power for a little more time.

Read More: “Because the Joker king can never be wrong”, Zelensky is on a firing spree

Believe it or not, Volodymyr Zelensky is losing the war. Zelensky is passing the blame on everyone who is visible in his sight. Firstly, he insisted that Western military assistance arrived a bit too late, then he started removing his own officials from various official posts citing them as ‘Russian-Agents’.

Because the king can never be wrong, Zelensky attempted every trick in the book. But, nothing seems to be working out. Now, the Ukrainian forces are decimated and the support for the comedian turned President is also waning.

The end of war is now in sight, and so, just to extend his tenure of Presidency before running away finally from the country. Zelensky is now looking to ‘Neo-Nazi’ forces to come back to the battlefield and rescue his chair.

Read More:For the first time, Zelensky admits that Ukraine is losing the war

Zelensky is tormenting Ukrainian Jews as Zelensky sees his end near. Doing anything against Jews is a friendly message sent to Azovs from Kyiv, but, will it please the exiled Azov Battalion, this remains to be seen.