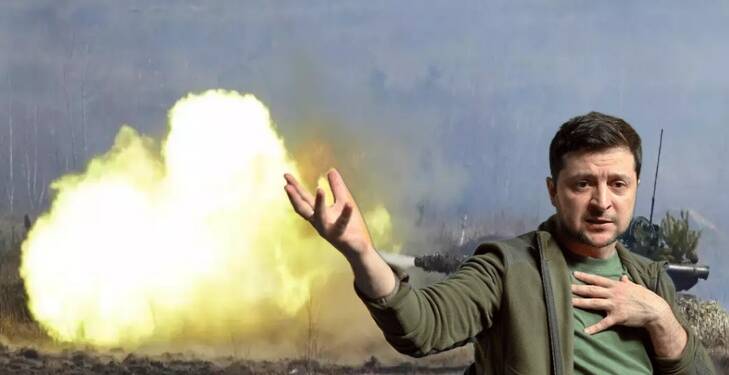 Ukrainian President Volodymyr Zelensky has a message for the US and other Western powers- thank you for your weapons, but Ukraine has already lost the war.

There was false optimism in the West about a surprise comeback by the Ukrainians. However, Zelensky has pretty much ended the debate surrounding the Russia-Ukraine war with his latest remarks.

The Ukrainian President acknowledged the sanctions against Russia imposed by the US and other Western powers. He called them a “good start.” But at the same time, Zelensky also said, “The whole world started making decisions too late.”

The Ukrainian President added, “I want to thank the countries that are helping with weapons. We are thankful, but it’s too late.”

Zelensky disclosed that he spoke to US President Joe Biden, who approved military aid worth $350 million to Ukraine and also asked Congress to approve $10 billion of additional aid.

Yet, Zelensky knows that Ukraine is heading towards a certain defeat. He said, “It’s a pity that it began after the beginning of this war but we have it, and my appreciation [goes] to him and his team.”

Ukraine wanted NATO to establish a no-fly zone in Ukrainian skies ever since the Russian military invasion started.

NATO countries however didn’t accept Ukraine’s request. Establishing a no-fly zone would have involved strikes on Russian and Belarusian territory. Any such act of aggression by NATO could have widened the ongoing war and NATO didn’t want to escalate tensions with Russia.

Zelensky however says that he had pleaded with Biden and European leaders to impose a no-fly zone over Ukraine and stop Russia’s “constant bombing of non-militarized zones.”

The Ukrainian President claimed, “I said: If you cannot shut the sky now, then give us a timeline. When will you do it?” He added, “If you can’t provide a timeline now, tell us how many people have to die. How many limbs have to fly off of people’s bodies, so you hear us? How many people will count, and we’ll wait until that moment when you feel comfortable.”

Zelensky seems to claim that the lack of cooperation by the West is allowing Russian forces to continue their onslaught. He is even talking in the language of what could happen if Ukraine fails to stop the Russians.

The Ukrainian President said, “After Ukraine — if we don’t exist, God forbid — then it will be Latvia, Lithuania, Estonia, Moldova, Georgia, Poland.” He added, “And they will keep going on until the Berlin Wall. They will continue.”

In fact, The Times has published a report that states, “Volodymyr Zelensky survives three assassination attempts in days.”

The latest events clearly suggest that the war is going to end soon with Ukraine’s defeat. Zelensky is talking about how Western military assistance arrived a bit too late and Ukrainian authorities seem to be building up sentiment about a possible danger to Zelensky’s life.

Only some final formalities are now left to be done. Soon, Zelensky could be evacuated on the basis of the reports about plans to assassinate him. And it will be immediately followed by an inevitable peace deal between Moscow and Kyiv. For a long time, Zelensky kept beating around the bush but now he has admitted that Ukraine is losing.