“Because the Joker king can never be wrong”, Zelensky is on a firing spree 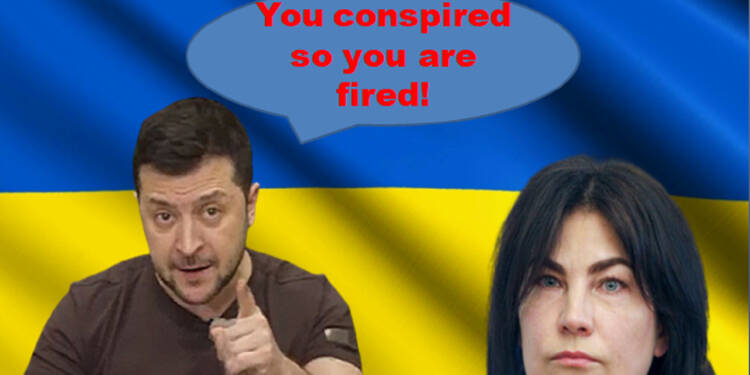 Comedian Zelensky is now playing the blame game. surprisingly, the president became so engrossed in the game that Zelensky lost all sense of direction and blamed military officers and his own childhood friend for the loss in the conflict with Russia. He is now blasting the officials for taking decisions without his consent.

Volodymyr Zelensky is that shoddy person who is now blaming his own people when he acknowledged that Ukraine is losing the war. Therefore, he is only attempting to avoid criticism by placing the responsibility elsewhere. Zelensky initially accused that a member of his inner circle had conspired with Russia.

He blamed on his own childhood friend who was also Ukraine’s spy chief. As per the Ukraine authorities, the spy chief might have passed on crucial information to the Russian forces, which resulted in Kherson falling into Russia’s hands almost immediately after the Russians attacked it. Moreover, Zelensky also listed a large number of treason cases to defy his moves of firing these officials.

Zelensky on a firing spree

As Ukraine is losing the war, obvioulsy now Zelensky is left with no other option but to look for a fall guy who can take the responsibility of the loss in the war. He is shifting blame on others to keep himself in a safe zone. But what’s more ruthless? The comedian is making his own military officials the sacrificial lambs in his blame game. Well, he has dismissed Ivan Bakanov, a childhood friend and former business partner whom he had appointed to lead the state security service (SBU) and went further dismissing Prosecutor General Iryna Venediktova, replacing her with her deputy Oleksiy Symonenko.

“In particular, more than 60 employees of the prosecutor’s office and the SBU (state security service) have remained in the occupied territory and work against our state,” Zelenskyy said.

Read More: Spy chief, military and now ambassadors; everyone is responsible for Ukraine’s loss but Zelensky

“Such an array of crimes against the foundations of the state’s national security, and the links recorded between Ukrainian security forces and Russian special services raise very serious questions about their respective leaders,” he said in his nightly video address to the nation.

In addition, Zelensky has been ruthlessly sacking Ukraine’s ambassadors to Germany, India, Czech Republic, Norway and Hungary. The President further blamed Col. Ihor Sadokhin, his assistant and the director of the anti-Terrorist Center for informing, Russian forces leaving Crimea towards the north, about the whereabouts of Ukrainian mines and assisting them in arranging a flight path for their military planes.

The Ukrainian president is comparable to the mediaeval ruler who, in the event of defeat, would assign blame for the fall of his realm to others.  The ruler cannot be condemned because they are too powerful and superior. Therefore, he is criticising others for losing the fight “because the joker king can never be wrong.”

Indeed, the Joker king is fighting tooth and nail as he wants to defeat Putin at all costs. But, what the joker king is dreaming of is a pie in the sky. Now, the comedian is frustrated! So, now he is playing a game to soothe his nerves.

33 When I Am Gone Quotes for love and Relationship