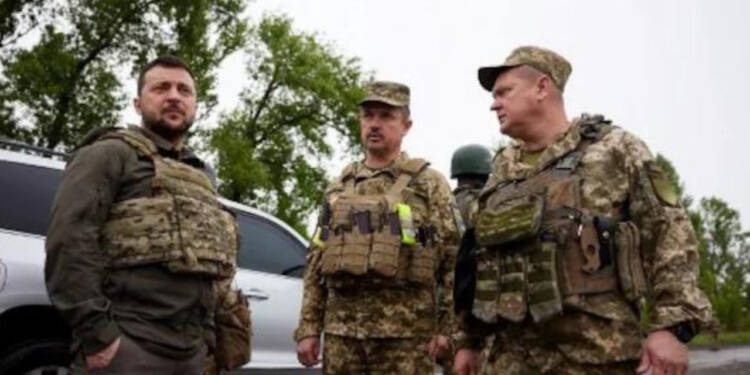 The blame game for the misery all across the world has begun. As the Russia-Ukraine war goes on, the repercussions of the war have already presented grave consequences for the globe. But for Ukraine, the consequences are really discerning as the war has destroyed the nation completely.

Moreover, Ukrainian territories are continuously falling in hands of Russia i.e. Ukraine’s administrative control is getting limited day by day. Yet, the war is being continued as Zelensky wants to defeat Putin at all costs.

But, questions are to be raised over Ukraine that despite all of the aid and assistance, how is the nation still losing territory. Well, the West has Ukraine to blame, but Zelensky has got his own sacrificial lamb. Yes, Ukraine has blamed its military for the seizure of its territories by Russia.

Ukrainian President Volodymyr Zelensky has blasted his military officials for taking decisions without his consent. As per media reports, the Ukrainian military has imposed a few restrictions on the movement of military personnel without Zelensky’s consent.

The General Staff of the Armed Forces of Ukraine declared that the restrictions will require Ukrainian conscripts, reservists, and those obligated to military duty to get authorization from military territorial recruitment and social support centers before leaving their region.

Zelensky chastised the General Staff’s decision. Zelensky criticized the decision during a national address, stating that it caused “a lot of disputes.” and it is a decision without his ‘consent.”

He said in translated video remarks, “I see that there are different assessments of such a decision. There is a misunderstanding, and even indignation in society, I promise the people to figure it out. And I ask the General Staff not to make such decisions without me in the future. Glory to Ukraine!”

Due to this decision of Ukrainian Officials, Ukrainians are lambasting that it unfairly restricts peoples’ ability to travel, could harm the economy and that the announcement was not clear about what movements would still be allowed under the newly enacted rule.

See, this is not the first time that Zelensky has pulled over a blame card to save his face. He has done a similar thing in the past too.

Read More: Ukraine puts up weapons for sale on the dark web that America gave it to guard itself

Just a few weeks ago, Zelensky charged his close aid for conspiring with Russia. Zelensky blamed his own spy for his loss in the war.  According to the Ukrainian authorities, he had provided the Russian forces with essential information, which led to Kherson falling into Russian hands nearly quickly after the Russians invaded it.

Now, this new blame has begun that it is military officials that have restricted movements of Ukrainians who are fighting for the country and Zelensky has no say in it. There have been several reports that Ukraine is not allowing its own fighters and mercenaries to leave the country.

Probably, as the pressure mounted over Zelensky to irk about these reports, Zelensky put all of the blame on the Military, ‘Man! It’s their decision and I can’t help it.

Zelensky’s constant policy blunders have put Russians in a pretty strong position. Donbas and Luhansk regions have been completely Russified, while Ukraine is still calling for foreign aid as it faces the heat of the war.

Read More: For the first time, Ukrainians fight along with Russia to scare off Zelensky’s troops

Zelensky never fails to show his true colors to the world. As Ukraine continues to lose its territories, he has started to put the blame on his own “conspirations” over others. The blame game is never-ending on the Ukrainian side, wonder how will they reclaim their lost hand.