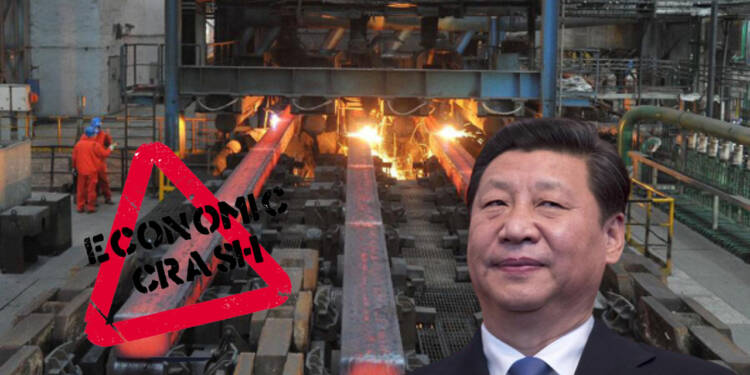 Beijing’s biggest economic weapon is on the decline and it looks like it would be impossible to rescue it under the given circumstances. China, understandably, has been blessed by advantageous demographics and a strategic location. China could have become a superpower in the near future. However, the CCP’s expansionist policies and unlawful business procedures have finally burst the bubble that is the Chinese economy.

The Zero Covid policy, changing geopolitical conditions due to the war in Ukraine, and decreased global confidence in the CCP have weakened the Chinese economy significantly. China’s economic growth has fallen to 0.4% which is its weakest in two years. One of the biggest shocks to follow was Hong Kong slipping into recession after its economy shrunk by 1.4% in the second quarter after contracting by a revised 3.9 percent year on year in the first three months, according to preliminary data released by the Census and Statistics Department on Monday.

China is under the grip of a severe housing crisis. Individuals reportedly in some provinces refused to pay for the mortgages until the projects came through. The Chinese government, which is already struggling, is unable to help builders complete projects.

The impact of the housing and infrastructure crisis is directly transferred to the steel sector. As demand is threatened by a real estate crisis and Beijing’s construction-led growth model becomes increasingly impractical, Chinese steel sector is entering a hazardous new phase.

Experts assume that the crisis will certainly last five years and over a third of Chinese steel mills could file for bankruptcy. “The whole sector is losing money and I can’t see a turning point for now,” Li Ganpo, founder and chairman of Hebei Jingye Steel Group said. Goldman Sachs Group Inc. sees steel demand down by 5% this year as the property sector accounts for at least a third of Chinese steel demand. The Chinese market did witness a similar issue in 2015-2016, however, the government was able to bail the sector out by extending financial stimuli and subsidies but that would not be the case now because of the deficiency of funds.

The Chinese Steel sector produces around 50% of the global steel output, however, as is always the case with Chinese products, a large quantity of this steel is substandard. Chinese President Xi Jinping’s growth model seems to have come to a standstill and he looks reluctant to deploy the required levels of infrastructure spending and fiscal stimulus required to revive the sector.

Steel is one of the most versatile materials in the world, and it is also one of the easiest materials to reuse and recycle. Stainless steel is elemental for the chemical industry. Its strength and resistance to corrosion are incomparable and the stainless steel filter-seamless pipe combination is a mainstay of modern fluid systems. It is used in various forms in the housing, transportation, industrial, vehicle, infrastructure, and utility sectors. Beijing’s steel sector is a major driver of many associated sectors which are now under an increasing threat of disruption. Steel is one of the most inventive and adaptable alloys, and it can be tailored to meet a variety of needs. The Chinese property market, similar to Japan’s, has always been the reason for its miraculous growth. However, the bubble of the Chinese market is about to burst and multiple sectors will face the heat.

In addition to being the largest producer of steel in the world, China is also the biggest consumer of this alloy. A significant market share and correlation with multiple industries make the steel sector highly relevant. A slowdown in the Chinese economy, therefore, is always proportional to disruptions in steel production.

A steel purchasing managers index for July is now at its lowest reading since 2008. Experts assume that the worst is yet to come in the next quarter. “The third quarter will be the most difficult time for the industry,” Zhu Guosen, vice director at Shougang Group’s technology research institute, said at the meeting in Beijing.

Beijing’s uneconomic policies have finally backfired. This crisis looks like it would have a long-term impact on Chinese Industrial capacity. China should focus on developing a more stable economic structure instead of wasting time on its useless expansionist policies…