Russia kept things calm in the region despite all adversities during the past two years, but the region is now erupting in the fire as soon as EU chimed in 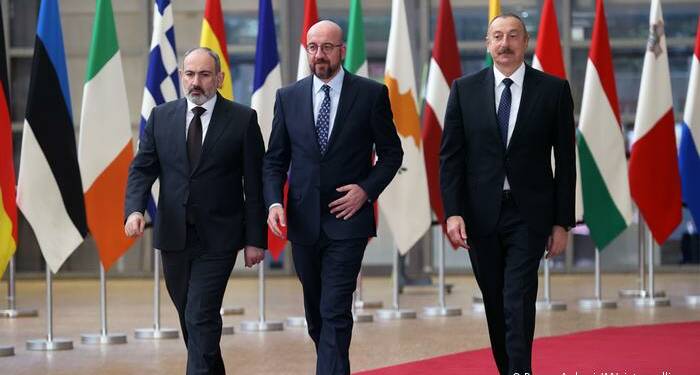 In 2020, a long-simmering conflict over Nagorno-Karabakh erupted into a six-week war between Armenia and Azerbaijan. Around 2,000 soldiers and civilians lost their lives in the clash. Armed drones and other weapons supplied by Turkey helped Azeri forces break past Armenian defences and usurp territories, including almost 40% of Nagorno-Karabakh itself.

How Russia brought peace in the region?

Back then, it was Russia that brought peace to the region. Russia, which has a security agreement with Armenia, refrained from fuelling the war and adopted a neutral stance. When the Armenian PM sought military help, Putin turned it down saying that the security guarantee was for Armenia and not for the Armenians in Nagorno Karabakh.

Russia then brokered a ceasefire between both the countries. Putin acknowledged Azerbaijan’s triumph because the truce with Baku permitted Russian peacekeepers to maintain a 5-year-long temporary presence in the region. This way, Putin saved Armenia from losing all of the contested territories.

The core of the enclave today lies outside the control of Azerbaijan. Russia calls the shots in the region, including controlling the Lachin corridor, which connects the enclave with Armenia.

The region remained peaceful from November 2020 to August of this year. The tensions are flaring up again, and it has Europe written all over it.

From day one, Europe has been impatient with the ceasefire agreement brokered by Moscow. It couldn’t digest the fact that Russia kept Western countries out of the final talks and remained assertive in the South Caucasus.

With Russia’s peacekeepers in the region, Baku couldn’t even think of waging another military offensive in the region.

But that changed in the first week of August. Breaching the 2020 ceasefire agreement, Azerbaijani troops fired grenade launchers and employed attack drones, injuring 14 military personnel of Armenia and killing two others.

Now, where the pint-sized nation of Azerbaijan is getting this courage from? Who is emboldening its bellicose attitude against Russia and Armenia?

All roads lead to EU here. It’s no secret that EU has long tried to wade into the Nagorno-Karabakh peace process in a bid to undermine Russia’s influence. Such attempts got wings lately as Russia occupied itself with the war in Ukraine. In April, EU officials surreptitiously met for the first time with the leaders of Armenia and Azerbaijan. EU President Charles Michael again met with the leaders for the peace negotiation at the end of May in Brussels.

And just two weeks before the recent clashes broke out, President of the European Commission Ursula von der Leyen met with Azerbaijan’s President Ilham Aliyev. The two leaders signed a deal aiming at doubling imports of Azeri oil to Europe by 2027. Azerbaijan, which now delivers 8 billion cubic metres of gas per year to EU, will expand its capacity to 20 billion cubic metres.

The amount of Azeri gas imported will climb to 12 billion cubic metres (bcm) next year, which, according to Ursula, will help compensate for cuts in supplies of Russian gas and contribute significantly to Europe’s security of supply.

However, the deal is being seen as EU’s attempt at bolstering Azerbaijan for its illegal actions in the Nagorno Karabakh region. 50 French politicians recently echoed the same concern, as they signed a transpartisan letter to argue that an agreement with Baku would simply legitimize Ilham Aliev’s dictatorship.

The letter highlighted the “appalling plans” of Azerbaijan in the 44-day war of 2020. The use of phosphorus bombs and the torture of prisoners of war held in Azerbaijani jails, with total disregard for international conventions was criticized by French leaders. Analysts say that EU signing a gas deal gives an edge to Baku in peace negotiations.

Thus, the support for Azerbaijan by EU legitimizes Baku’s illegal actions in the region. With EU’s silent approval, for which securing energy supplies at any cost has become the topmost priority, Baku has launched a war on Armenia. Another war has been set off by EU in eastern Europe, just to further its own economic and political interests.