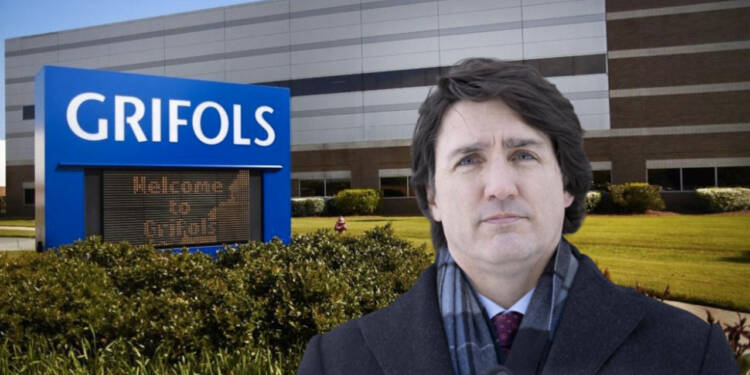 For the people of Canada, surviving in Trudeau’s regime is becoming increasingly difficult. Airport crisis, forced vaccination and crushing dissent are just a few examples of his “liberal” methods. And Now, Trudeau’s toying with the idea of selling Canadian blood to foreign agencies.

Prime minister Justin Trudeau is having a gala time in Costa Rica. While the leader is relaxing on the scenic beaches of San Jose, Canadians are struggling with strong restrictions imposed by the liberal government. This time his policies are wreaking havoc in the blood agency.

Canada’s blood agency is on the verge of signing an agreement with a Spanish pharmaceutical giant that would transform plasma collection in Canada into a money-making industry. Canada will, in all likelihood follow the US’s trajectory wherein low-income households, from Michigan to Mississippi, came under the spell of private clinics. What followed is gut-wrenching. The poverty-stricken started selling their plasma to MNCs. They got a couple of dollars and the MNCs went on to make huge profits. According to sources at Canadian blood services, the agency is set to sign a contract soon with Grifols, the world’s largest plasma producer that made $807 million in profits in 2020.

Plasma contains vital antibodies used to develop treatments for hemophilia, immune disorders, and neurological conditions, and it has grown into a $24 billion-a-year global sector. Most plasma is collected by the publicly-funded agencies in Canada, but this deal would dramatically change that—allowing Grifols to set up private clinics to collect plasma, process it, and sell it back to Canadian Blood Services at a profit. Since people coming from a lower-income background will get paid, the odds of them donating repeatedly goes high and this will pose health risks. Just like it did in the US.

The creation of Canadian Blood Services, entrusted with managing the country’s blood supply and blood products, was based on the Royal Commission’s recommendations that donations remain public and non-paid in the wake of the “tainted blood” scandal of the 1980s wherein more than 8,000 Canadians died after they received improperly screened blood from paid donors that were infected with hepatitis C or HIV—prompted in part.

“It is widely known that these companies can redirect their source plasma at any time and break a contract,” said a letter from the nurses’ unions, which was shared with The Breach. The letter further stated that “They have an export model which is designed to sell collections to the highest bidder in the international market.”

The Spanish company Grifols has a shady past. In Romania, five companies—including one now owned by Grifols—were recently fined after colluding to withhold the supply of plasma from the market in order to pressure the government to retract a tax on their products.

Private pharma companies have been trying to bring about this change for a long time. Due to its high sensitivity and risks, plasma collection has been strictly regulated almost entirely by the Canadian Blood Services. But Trudeau has always maintained good relations with Big Pharma and he has stepped up in support of them yet again.

The move toward such a mechanism for blood agencies in Canada will turn the whole system on its head. Sensing the dereliction of duty, many organizations including the Canadian federation of nurses union have written a letter demanding for this deal to be put on hold. But Trudeau can’t hear these voices and cries of protest. He is busy having a blast in Costa Rica.