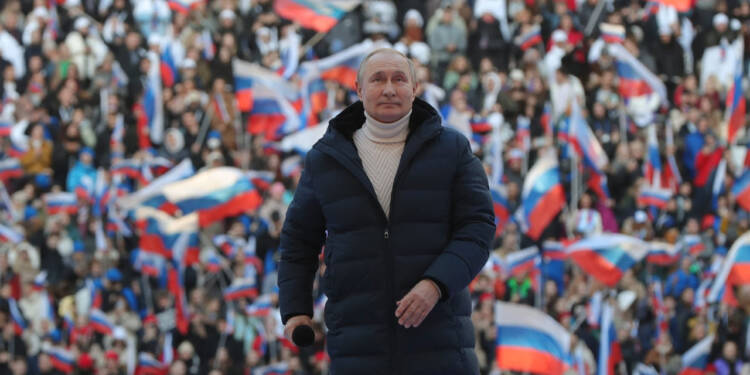 Russian President Vladimir Putin is a gentleman when it comes to war. Moscow’s special operation in Ukraine has been very successful not only militarily but has also been quite an example when we glance over the humanitarian guidelines.

The local populace of Ukraine has slowly realized the shortcomings of their President. Zelensky owes responsibility for pushing his country into an unwinnable war for his selfish motives.

The Kremlin has been very careful in orchestrating strategy in its war against Ukraine. Unlike what the United States did in its war in Iraq and Afghanistan, Moscow has been very persistent in keeping innocent citizens away from the frontlines of the conflict.

Some instances of Moscow targeting residential infrastructures have also come to light. Though, most of the news arising was outright false and part of a wider propaganda plan by Zelensky.

On the other hand, Ukraine has been caught red-handedly after they purposely used a nursing home as a base for operations, even after knowing that they would be placing the residents and patients of the nursing house in grave danger.

Also, recent reports from Amnesty International lists incidents in which Ukrainian forces appear to have exposed civilians to danger in 19 towns and villages in the Kharkiv, Donbas and Mykolayiv regions. This was startling for Zelensky and his precarious regime, which has so far presented itself in pious and saintly light.

There have been almost no instances in the history of the world when the civilians of the opposing party were presented with residential rights. In the initial days of the war, Russia offered a quick path to citizenship to the residents of the Donetsk and Luhansk republics. Additionally, people of the Donbas region have also been presented with the membership of the Kremlin’s ruling party and other perks, such as its COVID-19 vaccines or trade preferences for local manufacturers.

Apart from the Donbas area, the Russian occupation authorities in southern Ukraine also handed over Russian passports to locals in two cities – Kherson and Melitopol in mid-June.

The civilians have seen the attitude of the Russian authorities. And, owing to the increasing instability in Ukraine, lakhs of Ukrainian citizens are looking to migrate to peaceful countries. Now many experts would assume that a majority of these refugees would look to migrate to states far away from Russia.

However, the majority of refugees chose to migrate to the Russian border to escape from the volatilities at home. According to the report by UNHCR, more than 1.9 million individuals have migrated to Moscow. The number is almost 700,000 more than those who have migrated to Poland.

A country which has been portrayed by the West as a violent and deviant aggressor is the prime choice of refugees. Surprising, right?

The large-scale influx of the Ukrainian population to Russia is direct proof of how Putin has been very careful in carrying out operations in Ukraine.

Ukraine’s local populace has now been fed up with Kyiv’s unjustified ambitions and does not want to be involved in an unwinnable war anymore. They are starting to realize the fault in their leader’s decisions. The civilians have finally understood that the war is purely a consequence of the selfish ambitions of their clown President.

A quote by Mahatma Gandhi holds true for Putin in this scenario.

“I suppose leadership at one time meant muscles; but today it means getting along with people.”