“We will point our cannons at you,” Poland’s blood-curdling warning to Brussels 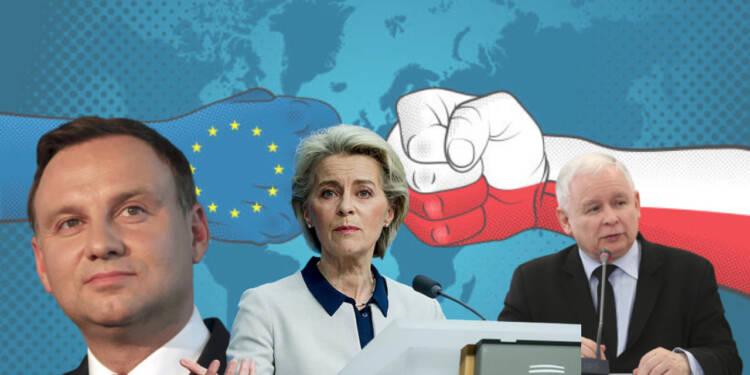 EU is going to break soon. This may sound rhetoric but it’s a real possibility. As Germany maintains its hegemony within the EU, Poland has issued a stark warning to Brussels.

These statements could escalate the unrest among the smaller EU countries and it’s imminent that a major clash is on the cards.

Jarosaw Kaczyski, Poland’s de facto leader and former Deputy Prime Minister, has said that his government would no longer cooperate with the European Commission’s rule-of-law demand to release €35 billion in grants and loans from the EU pandemic relief programme.

This pandemic relief program has become a hot potato within the Bloc. The fund was never intended to serve as an instrument for enforcing democratic standards within the bloc. But over the last few years, it has become an excuse for the Commission to make Warsaw dance to its tunes.

Brussels has constantly declined to approve Warsaw’s plan to spend approximately €36 billion in grants and loans, part of the union’s €800 billion recovery fund, over worries about judicial independence and the nation’s failure to implement decisions from the EU’s top court. Warsaw tried following almost every EU demand, but the demands have become neverending.

Last month, Brussels demanded Warsaw to roll back changes in its judiciary system because the EU believes it is a ‘violation of democratic standards’ as it bought judges under tighter political control. Afterwhich, the Polish parliament passed a legislation that reverted the changes within the Judiciary. Yet, the funds have not been released.

The EU has kept silence over the issue. But, Poland’s most influential political leaders Jaroslaw Kaczynski, Aleksander Duda, and Mateusz Moraweicki are angered by this approach.

Jarosław Kaczyński has announced that Warsaw would wage a war against the EU if necessary. He accused Commission of trying to undermine rule of law in Poland and reminded Polish judges that their first loyalty is to the Polish law.

Kaczyński stressed: “We have shown maximum goodwill, but concessions have yielded nothing, It’s time to learn lessons,” his voice was echoed by other party members too. Krzysztof Sobolewski, the party’s secretary-general, has warned in an interview, “If the European Commission tries to push us against the wall, we will have no choice but to pull out all the cannons in our arsenal and open fire,”

The Polish government required EU funds to help deal with soaring inflation and the rising threat of an economic recession, but EU’s constant negligence has forced Kaczyński, Duda, and even Moraweicki to become more skeptical of the Commission.

EU has already paid more than €100 billion in Recovery and Resilience Facility funds to nations like Greece, Germany, Italy, France, and Spain but, disbursements to Poland and Hungary have stalled over rule of law concerns.

The country has long wished to become a “messiah” of smaller EU members, as the EU’s persistent predominance has produced a widespread distrust of Brussels. As most of the smaller members of the European Union are opposed to the proposed 15% reduction plan for bailing out Germany.

Hungary publicly opposed the 15% reduction plan. Portugal, meanwhile, has also entirely rejected the EU idea. Conflict over Russian tourism is growing between the Baltic states and the EU. Similarly, this is also the case within the Balkan countries.

In short, everyone is unhappy with the EU’s commission under Ursula Von Der Leyen, with the exception of four to five countries.

Read More: There is no coming out for Europe from this tragedy

The EU has reached its inflection point; going forward, it will either vanish completely or cease to exist as a strong economic alliance. Poland’s blood-curdling warning needs to be taken seriously because, if it actually presses the #POLEXIT button, the alliance would witness a massive exodus.