The Trudeau government's cracking down on its citizens won’t make headlines. But a corporate giant fueling it certainly will. Well, we are talking about Microsoft Corp. co-founder Bill Gates 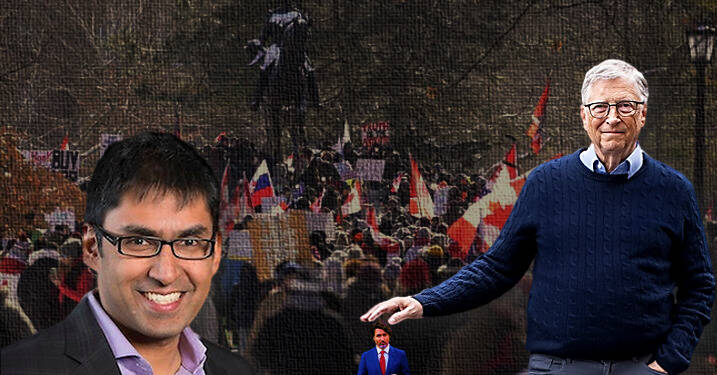 Canadians were fooled by the government by forced vaccinations on the pretext of combating the novel coronavirus. But the ulterior motive of the government was to fatten the wallets of the business magnate. Trust your ears when we say this.

We all know the dog and pony show over Covid restrictions that took stage in Canada. To this day, the lousy episode is continuing with full vigour in the North American country. Each day passes with new liberal doings from the Prime Minister proving his critics right that he is a complete fanatic.

BILLIONAIRES GOT A ROLE IN CANADIAN POLITICS

It has been two years since the spread of the China virus and still, Canada is hell-bent on making people’s life uncomfortable with restrictions that are simply unjust. Canadians were being barred from leaving the country or even travelling within the provinces.

As Trudeau of all people loves to fall out of the box, he came up with the toughest vaccine mandate around the globe which eventually jeopardized Canada’s democracy. Since 30 October 2021, anyone over the age of 12 has been required to be vaccinated against Covid-19 to board a plane or train in Canada.

From paying hefty fines for the breakage of the so-called covid protocols to getting barred from travelling, Canadians have gone through a lot. But, now here comes something which is even more outraging.

You see, not only Justin Trudeau but several other prominent faces showered support of the vaccination drive. One of them was Kumanan Wilson, the founder of CAN Immunize, a digital tool to help know whether a citizen is vaccinated or not. Adding further laurels, Wilson also found space in Trudeau’s Covid task force.

Kumanan Wilson is the spouse of Kim Barnhardt, a senior strategist of Canada’s Medical Association Journal. What’s worth noting here is that the Journal has been publishing its studies of Wilson. Simply saying, Wilson published his studies in medical journals run by his spouse, and now all the farce saw light after CDC said vaccination is not mandatory.

Now, you might be pondering over how Bill Gates got into the picture. Well, then you might be outraged to know that the Vaccine passport company of Wilson is personally funded by the business magnate, Bill Gates.

Microsoft Corp. co-founder Bill Gates has time and again stressed the need of manufacturing the most promising vaccines to combat the virus. To combat the far-reaching spread of the virus, Bill and Melinda Gates Foundation came up with a proposal to make billions of dollars available to develop facilities and manufacturing doses.

And this urged Trudeau to come up with the strongest vaccine mandate around the globe. In the garb of protecting the people of his country against the deadly virus, the ‘Crime Minister’ and his philanthropist buddies were filling their coffers.

It’s not like he published in medical journals run by his spouse while holding shares in his own vaccine passport company personally funded by Bill Gates and touted by our media as an “expert.” That would be outrageous, right? pic.twitter.com/eoHOmSm7EA

Mr. Trudeau had no empathy for the unvaccinated ones in Canada. Trudeau put his countrymen with the toughest COVID vaccine mandates which could even shame a third-world country. Apart from that, it snatched away basic freedom from the poor Canadians.

The democracy in Canada saw a screeching end as soon as Trudeau went with his strict Covid mandates and now with the politics broadening, the cameos played by Billionaires will Shock every sane mind.

Collection of 23 She quotes and captions