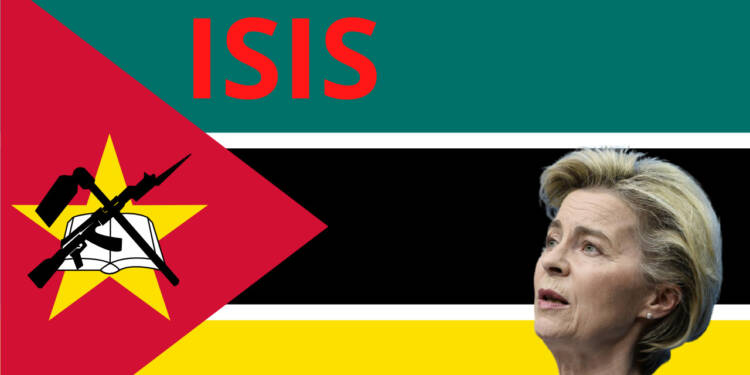 EU has always been opposed to Wagner’s crackdown on Islamists in Africa. You will find numerous articles or posts on social media, where the EU officials have constantly lambasted Wagner’s presence in Africa and sometimes even showed sympathy for some Islamist groups.

However, the EU now aims to classify Islamists as one of the continent’s top concerns. However, the commission’s sudden affection for Africa has little to do with humanitarian concerns. There is an evil economic perspective too.

A classified EU document reveals that the EU is preparing to expand financial backing for an African military operation in Mozambique by nearly five times, as Islamist attacks continue to break havoc within the region.

According to the leaked documents, the European External Action Service (EEAS) and the EU’s de facto foreign ministry has recommended 15 million euros ($15.3 million) of EU funding till 2024 for the Southern African Development Community (SADC), a bloc of 16 African nations of which half a dozen sent troops to Mozambique.

For some additional information, The EU has already pledged to provide the country’s army with an additional 45 million euros ($45 million) of financial support and has so far made available to the SADC mission 2.9 million euros of funding.

Now, this latest support would be including radars, mine detectors, boats, and medical supplies. So, on humanitarian grounds, EU is undoubtedly trying to become a savior for Mozambique.

But, hold your horses, because there is also an ulterior motive behind the EU’s intention to crack down on Islamists, and that is related to ensuring its LNG supply.

The energy crisis brought on by the war in Ukraine has hastened Europe’s search for gas off the northern coast of Mozambique, where the city of Cabo Delgado is established. Several Western oil corporations are planning to build a huge liquefied natural gas (LNG) facility here.

But the only thorn in its construction is the Islamists. In its most northern, gas-rich province of Cabo Delgado, where there are LNG projects worth billions of dollars, extremists affiliated with the Islamic State continue to remain dominant.

Furthermore, the attacks by the Islamists have recently increased, and that has affected the progress of ongoing projects.

With the use of a floating LNG terminal that can only process a certain amount of gas, the Italian oil company ENI anticipated starting shipments from a nearby offshore gas field this year. But as per the new reports, the deliveries are in trouble.

After Nigeria and Algeria, Mozambique has the third-largest gas reserves in Africa. The EU is concerned that the west may lose control of the north and its frantic attempt to extract gas from the northern coasts would fail miserably if there is no concrete assistance for the military operations.

Furthermore, the EU also believes that through this $15mn funding in Mozambique, the West would be able to counter Russian and Chinese influence in the Southern African nation.

The Russian private military firm Wagnerthree has already started to show its dominance in most of the African nations and for the West to reduce it, it would take a very strong effort.

Well, what you just heard here, is just the tip of the iceberg, there should be no doubt that every action the West takes about Africa is always for its own profits.

However, you’re probably overlooking a crucial element. Who was the first to destabilise Africa completely?

It was the west itself.

The west has long portrayed itself as Africa’s god, and regrettably, many African nations still look to the US or other Western allies for favor. Furthermore, it is important here to note that ISIS, which is presently breaking havoc in Mozambique was US’ own creation.

The group arose from the US’ own evil al-Qaeda. Sadly, by standing completely mute, the EU, which portrays itself as the torchbearer of multiculturalism, helped the spread of this deadly organisation.

However, the beast they let loose in Africa is now threatening to bite its own interests. ISIS is now literally blocking EU’s ambition by sitting on LNG pipelines. As a result, the EU has all of a sudden recognized that Islamists pose a threat to Mozambique.

Furthermore, when it comes to reducing the influence of Wagner forces, that also seems unlikely to happen. The African nations are increasingly preferring Wagner presence in their country. EU’s effort may fall flat again.