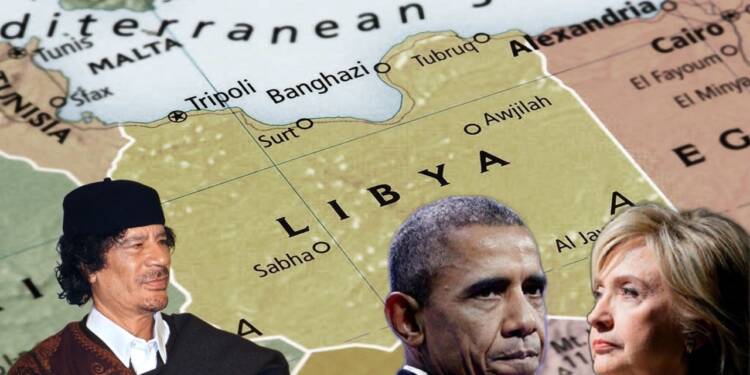 The United States of America is a conglomeration of states that if not united under a federal system, could have been separate countries. The United States of Africa is yet to be brought under one federal system. When it is brought under such a system, the USA will be given a run for its money. You all know how Barack Obama and NATO bombed the living daylights out of Libya, right? The North African country was sent back to the stone age. Since the late 1960s, when Muammar Gaddafi took over the reins of power, Libya went on from becoming one of the poorest African countries to one of the richest.

By 2011, Libya served as a model not just for other African nations, but also for developing countries around the world. It was economically independent, was self-sufficient in oil, food, and water, and even had its own state-owned bank. Education and medical treatment were free; having a home was considered a human right and Gaddafi had created the largest irrigation system on the face of the planet – called the Great River Project – that ensured water supply throughout the country.

Why was Muammar Gaddafi Killed?

2011 was the time when the Obama-Clinton-sponsored Arab spring regime change campaign was going in full swing across the Middle East. Interestingly, Libya was bombed to death by NATO’s forces only after the Obama administration got intelligence inputs that Gaddafi was planning on creating a pan-African central bank with its own gold-backed currency.

According to Hillary Clinton’s leaked emails, one correspondence, dated April 2, 2011, read in part: “Gaddafi’s government holds 143 tons of gold and a similar amount in silver. This gold was accumulated prior to the current rebellion and was intended to be used to establish a pan-African currency based on the Libyan golden Dinar. This plan was designed to provide the Francophone African Countries with an alternative to the French franc (CFA).”

Such a currency would have freed the African continent from its economic bondage under the dollar, the IMF, and the French African franc. Muammar Gaddafi would have emerged as a leader behind whom all African countries would rally, perhaps even leading to Africa becoming one consolidated, the federal unit of various states – much like America.

The former French President Nicolas Sarkozy was among the loudest proponents of destroying Gaddafi’s regime. In 2011, Sarkozy reportedly called the Libyan leader a threat to the financial security of the world. Why? You see, Gaddafi had shunned the Petrodollar, and was well on the path towards creating an African hard currency that would give the United States of America, its allies, and their institutional hegemony over the global financial system a run for their money.

In 2001, the same was done by Saddam Hussein. Dissatisfied with the shrinking value of the dollars that OPEC was getting for its oil, Iraq’s Saddam Hussein broke the Petrodollar pact and sold oil in euros. He was killed by the West too.

Gaddafi was killed in a more brutal way. He was publicly lynched to death. Hillary Clinton and her bosses wanted to make an example out of the man. Anybody who dares challenge the hegemony of the West in any manner should be prepared to face a similar or even worse fate. That’s the message that NATO wanted to send out.

Read more: Two strategic blunders of Biden that made North Africa reject the US

An Africa united by one currency would eventually become a very powerful entity on the world stage. Its size, scale, resources, and manpower would have been insurmountable. The United States of America and its allies would be reduced, in the long run, to insignificant entities. So, the idea of a United States of Africa was nipped in the bud by Obama and his friends when they publicly killed Muammar Gaddafi.