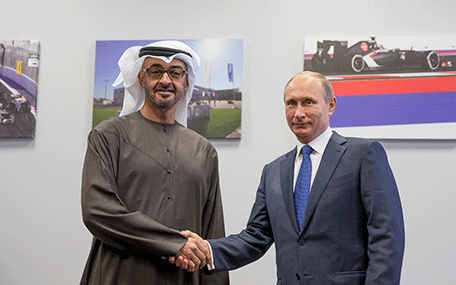 Here’s what’s happening in Libya. The war for Libya between the Islamist Government of National Accord (GNA), which is holding the fort in the capital city of Tripoli and making significant gains against the rival Libyan National Army (LNA) led by General Khalifa Haftar, has led to the creation of a geostrategic canvas which perhaps no other conflict has. The GNA-front is supported by the likes of Turkey and Qatar, while the General Haftar-led LNA forces are backed by the United Arab Emirates, Russia, Saudi Arabia and Egypt. But what if we told you that Afghanistan has the potential to become the next Libya, if Russia and UAE decide to put the hat of decisiveness on?

Now here’s what has happened in Afghanistan. The country has fallen to the Taliban, and the resistance front led by the likes of Amrullah Saleh and Ahmed Masoud is said to have strategically fallen back to Tajikistan. The Taliban claim to have established their control over the otherwise impenetrable Panjshir valley, for the first time ever. The Afghan resistance front is severely injured for now, and needs some time to heal. In the meantime, according to Foreign Policy, they are planning to set up an Afghan government in exile.

TFI has been at the forefront of explaining how the Afghan resistance front has the tacit backing of Russia, since they are being accommodated by a CSTO-ally like Tajikistan and allowed to plan their future course of action from Tajik territory. Russia is playing a very strategic game, and is not revealing all its cards just yet. However, it fears a Talibani spill-over into Central Asia, which is why it is very inclined to support the resistance front.

Also read: Tajikistan aided by Russia has plans to divide Afghanistan into two

Russia is wary of the effects which a Taliban regime will have on Central Asia. And its concerns are not isolated or unfounded. Countries like Saudi Arabia, UAE, India and even Iran are sceptical of a Taliban regime getting in charge of Afghanistan. Yet, there are countries like Qatar and Pakistan – who have made it a point to extend all possible support to the Taliban like there is no tomorrow. So, Russia finds its interests conflicting with those of Islamabad and Doha.

The UAE-Saudi Vs Qatar Angle

The United Arab Emirates is reforming itself. It is embracing modernity. The UAE is increasingly dissociating itself from Islamic fundamentalism. As such, the rise of an extremist Taliban regime in Afghanistan does not auger well for its larger regional geopolitical considerations. Additionally, the Taliban is being backed unapologetically by Qatar – a sworn rival of both Saudi Arabia and the UAE. Abu Dhabi fears that with the rise of a Qatar-backed Taliban regime in Afghanistan, its own interests in the Middle East will begin suffering setbacks.

Saudi Arabia and Qatar have been locked in a bitter diplomatic strife since 2017 when Riyadh and its allies severed diplomatic relations with Qatar on account of its association with terror groups. The UAE, as of now, continues to follow Saudi Arabia’s lead in terms of its own foreign policy.

In the days following a dramatic Taliban takeover of Afghanistan, Qatar shot to prominence in the war-torn country. Qatar has maintained good ties with the Taliban since the Obama era, as the then US President explicitly supported Doha’s efforts to deal with the Taliban.  During the evacuation process in Afghanistan, Qatar naturally enjoyed a position of advantage in the war-torn country. Therefore, the US itself praised Qatar for its role in evacuating tens of thousands of people from the chaotic Kabul airport. This is because Qatar and the Taliban are bed-buddies, which is why Doha felt no sense of insecurity in evacuating people out of Afghanistan last month. In the past, Qatar has even housed Taliban’s extremists and senior officials, and provided them with a safe haven.

On its part, the UAE is currently housing former Afghan President Ashraf Ghani. What this means is that the UAE is sheltering an Afghan moderate. Despite the man having fled Afghanistan at the first instance, he still represents a moderate and democratic faction of Afghan society. For him to find shelter in the UAE shows how Abu Dhabi is placing its bets on the democratic and anti-Taliban front of Afghanistan.

A Convergence of Interests?

Much like how the UAE and Russia find themselves on the same side in Libya, their interests in Afghanistan also happen to converge. This is the precise reason why we are suggesting that Afghanistan could be the next Libya, where major powers of the world choose definitive sides. With Russia and UAE stepping up support for the Afghan resistance and democratic forces, the likes of Pakistan and Qatar will obviously get pushed on to a backfoot.

Such a coalition, of course, is currently in its nascent stage. For Russia and UAE to physically back the Afghan resistance would need some time, since that front is severely bruised right now. The Afghan resistance needs to regroup, get their act together, and develop a strategy against the Taliban. If an Afghan government in exile does indeed take shape, there is the prospect of a regional proxy battle being initiated, akin to the one being witnessed in Libya.