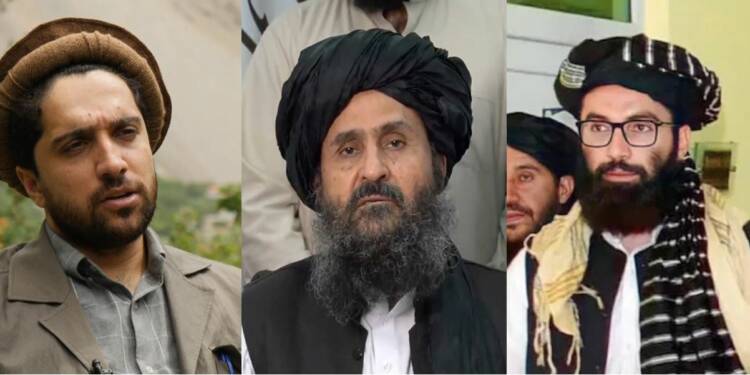 The Taliban suddenly find themselves in possession of an entire country, which they have no clue how to run or administrate. So, government establishment has been postponed, and the Taliban has decided to continue with what it knows best – fighting murderous and bloody battles against innocent Afghans, especially those who do not subscribe to the Taliban’s extremist ideology. The Taliban has been launching repeated attacks on Panjshir province, which is the only hold-out region of Afghanistan which the Taliban have no control over. Here, Amrullah Saleh and Ahmed Massoud-led resistance forces and the ‘Northern Alliance’ are making sure the Taliban and its monkey-like extremist fighters are killed in hoards every time they launch an offensive against the province.

The Taliban’s hold over provinces it currently has under control is also beginning to wane. Particularly, areas with significant non-Pashtun populations are beginning to develop a thirst for freedom and this is no good news for the Taliban. Meanwhile, a power struggle has ensued in the capital city of Kabul, where the Haqqani network – controlled by Pakistan and its military establishment is fighting for greater representation in the Taliban-led Afghan government which is about to come up.

Struggle in Kabul with the Haqqani Network

The Taliban is not having a smooth sailing in Kabul as it had hoped for. Pakistani proxy organisation called the Haqqani network is playing spoilsport, and is demanding a greater say in the Afghan government and important positions in the upcoming Cabinet. A fierce clash has also been reported between the Taliban and Haqqani network elements owing to the differences between the two groups over the leadership of Afghanistan.

It is rumored that tonight there was a fierce clash between Haqqani and Ghani Baradar elements over the leadership of the future government.
The same also happened 2 weeks ago which i reported on 21 Aug, and it was resolved with the mediating of the elders of Ghilji & Durrani. https://t.co/kNoIOl2F6Y

Interestingly, at least 17 people were killed and 41 wounded in incidents of gun firing on Friday night in Kabul. Emergency Hospital in Kabul said 17 bodies and 41 wounded people were transferred to its facility with the harm caused by Friday night’s citywide firing into the air. While the official reason given for the firing is the spread of news that the Taliban had finally captured Panjshir province, the reality seems to be different. Panjshir was never captured by the Taliban. Instead, the group got its bottoms kicked in the impenetrable region.

Gunfire last night in Kabul was a power struggle between #Taliban factions.

Taliban claims of taking control of the #Panjshir valley are false pic.twitter.com/O9618cTmOQ

A video message sent to us @BBCWorld from one of the leaders of the anti-Taliban resistance, fmr VP @AmrullahSaleh2 who says they're under attack from terrorists and points the finger of blame at Pakistan. Pakistan of course deny they support Taliban forces #Panjshir #Afghanistan pic.twitter.com/w3e6GnrRXi

So, it is highly likely that elements from the Haqqani network and Taliban sparred on Friday night, leading to the deaths of multiple extremists. It is no surprise, therefore, that Pakistan dispatched an entire intelligence and military contingent of high-ranking officials to Kabul on Saturday morning to help the Taliban in government formation and “to assist the Taliban in reorganising their army in order for them to control their territory.” Among those that flew to Kabul like there was no tomorrow was ISI chief Faiz Hameed.

Pakistan ISI Chief Faiz Hameed has reached Kabul with the list of ministers who will be sworn in the new Islamist Taliban regime of Afghanistan. pic.twitter.com/SUYSstyeBu

Pakistan, meanwhile, is engaging in psychological warfare against the National Resistance Front and is putting out fake news stories at an unprecedented pace. For its services to the Taliban, Pakistan wants itself substantially represented in the Afghan government via the Haqqani network.

With infighting galore in Kabul, the Taliban is also having to simultaneously suffer nothing short of a complete massacre in the Panjshir province, at the hands of brave resistance fighters led by Amrullah Saleh and Ahmed Massoud. On Thursday night, the Taliban reportedly launched their largest offensive against the Resistance Forces in Panjshir Valley. Over 7,800 Taliban extremists and at least 300 vehicles, including tanks, were involved in the operation.

Out intel indicate that 7,800 Taliban along with 300+ tanks & Humvees attacked Panjshir last night. This heavy offensive was crushed in the matters of hours. The Taliban retreated & on their way to Kabul were ambushed several times. There are dead bodies all along the highway!

According to the Panjshir Observer, the National Resistance Front (NRF) were able to hold their ground. Four hours into the offensive, and the number of casualties the Taliban was taking started to become unbearable, forcing them to enter full retreat. Over 450 Taliban fighters were reportedly killed and at least 130 were captured by the NRF. Meanwhile, in a previously failed offensive launched by the Taliban on Panjshir on Monday, the group suffered 350 casualties, while 40 of its men were captured.

My message to Taliban is unless there one person from Panjshir alive you won’t be able to rais your flag in #panjshir. Yake O Khulas

Thousands of trained fighters, many of them Tajiks loyal to Ahmed Massoud and Amrullah Saleh – who currently functions as the caretaker President of Afghanistan, are presently defending the Panjshir Valley. Moreover, thousands of fighters belonging to the Afghan National Defense and Security Forces (ANDSF) have fallen back from various posts and have joined the Resistance from Panjshir.

Read more: Why Taliban will meet its waterloo in Panjshir valley

The Taliban is desperate to capture Panjshir. The group knows that if the NRF is able to hold out long enough, the day when Afghanistan will be partitioned into two halves is not far. Afghanistan is a very diverse country, and the minority communities of Tajiks, Uzbeks and Turks cannot be ignored, because if they really want to break up the country and carve a separate state for themselves – they can, given their concentration in the country’s northern provinces, bordering Central Asian countries. This will serve a lethal blow to the Taliban’s plans of creating a ‘Greater Pashtunistan’.

These fault lines will only be exacerbated when the Taliban sacrifices its own leaders to please and accommodate the Haqqani network. With repeated failed attempts at establishing control over the Panjshir province, and having no international standing, the Taliban will find it incredibly difficult to run an entire country. Afghanistan getting split into two halves is not a far-fetched proposition. It is, in fact, a very likely possibility.