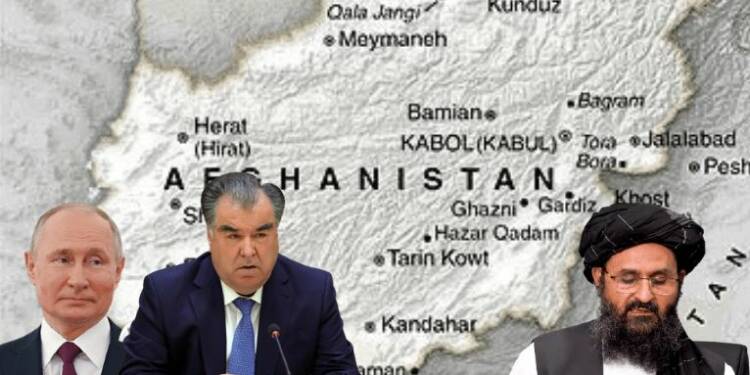 If you thought Afghanistan’s story ended with an unprecedented Taliban offensive, you are in for a big surprise. A lot can still happen in Afghanistan and with countries like Tajikistan, Uzbekistan and Russia getting involved, it seems that if the Taliban can’t be defeated, Afghanistan might itself get divided into two countries.

So, why do we think that Afghanistan might get divided into two? Well, the starting point is Tajikistan’s decision to award the country’s highest civilian honour to the Lion of Panjshir Ahmad Shah Massoud and former Afghan president Burhanuddin Rabbani. One might think that Tajikistan has simply honoured two Afghan greats, but there is a lot of political signalling behind the latest move by Dushanbe.

Interestingly, Afghanistan isn’t a homogenous country. The British-era division of the region was carried out in such a way that Pashtuns got divided between Pakistan and Afghanistan. Still, Pashtuns form the majority in Afghanistan.

Now, by honouring former Afghan Defence Minister Ahmad Shah Massoud and former Afghan President Burhanuddin Rabbani, Dushanbe is sending a message to Tajiks in Afghanistan. It may be noted that Massoud was known as the Lion of Panjshir and led the strongest resistance against the Taliban from his stronghold in the valley until he was assassinated two days before 9/11.

Tajikistan is therefore trying to draw the link between the ongoing Resistance against the Taliban from the Panjshir Valley, which is called the Northern Alliance and the huge stake of Tajiks in the ongoing turmoil inside Afghanistan.

Why Tajiks and Uzbeks might fancy an Afghanistan break-up

A number of Afghan people are ethnic Tajiks. They really abhor the Taliban, owing to their minority status in Afghanistan. Tajiks and Uzbeks are not as highly radicalised as the Taliban. Therefore, they don’t relate with the extremist-terror group.

Secondly, the Tajiks and Uzbeks are ethnically different from the Pashtuns. They are minorities in Afghanistan who are targeted by the Taliban, and therefore it is very natural for both the Tajiks and the Uzbeks to feel insecure under the rule of a Pashtun-dominated group like the Taliban.

For Tajiks and Uzbeks, the best-case scenario would be to defeat the Taliban and establish a democratic government in Afghanistan that respects minority rights. However, such a turn of events seems quite unlikely. In the present circumstances, it makes a lot of sense for the Tajiks and the Uzbeks to seek a separate nation, which is free from Taliban-led extremism.

How is Tajikistan helping fight Afghanistan?

Naturally, the Northern Alliance consists of many Tajiks loyal to Ahmed Massoud and Amrullah Saleh, who functions as the caretaker President of Afghanistan.

Meanwhile, there were reports about Tajikistan openly arming the resistance front which is fighting against the Taliban. The Northern Alliance led by Ahmad Massoud and Amrullah Saleh was said to have received military equipment, weapons, and other supplies from Tajikistan. However, Tajikistan denied these reports.

Moreover, many Tajiks in the Afghan security forces had migrated to Tajikistan when the Taliban was overrunning Afghanistan. Now, these Tajik soldiers are said to be returning to the Panjshir Valley. They are also believed to have brought heavy equipment and vehicles with them, which will boost Northern Alliance’s ongoing battle against the Taliban.

On the other hand, Uzbekistan, too, is playing a big role in fighting the Taliban. When the Taliban was overrunning Afghanistan, satellite imagery revealed that several airfields in Uzbekistan housed Afghan air force helicopters and planes.

Ultimately, the Afghan air assets are likely to aid the Northern Alliance in its fight against the Taliban. On the other hand, the Taliban doesn’t have an air force, nor does it have any recognised capabilities when it comes to operating the air assets left behind by the United States while withdrawing from Afghanistan.

Why will Tajikistan and Uzbekistan want to divide Afghanistan?

Both Tajikistan and Uzbekistan do feel an ethnic connection with Afghan minorities. When Pakistan’s Foreign Minister Shah Mahmood Qureshi visited Tajikistan and sought legitimacy for the Taliban, Tajikistan pushed back against Islamabad’s attempts to legitimise the extremist group.

Interestingly, Tajikistan claimed that Tajiks make up more than 46 per cent of the Afghan population. Here, the number “46 per cent” is quite significant. There is no certainty as to the proportion of Tajiks in Afghanistan. Since Afghanistan is a wartorn nation, it is not an easy task to estimate the proportion of the ethnic minority in the Afghan population.

However, Tajikistan’s claim about 46 per cent of Tajiks in Afghanistan shows Dushanbe’s intent to raise the stakes of the Tajiks in the wartorn nation. Now, even Tajikistan understands that defeating the Taliban militarily isn’t a cakewalk. So, a practical solution is to disintegrate Afghanistan.

Dushanbe can carve a democratic nation out of Afghanistan that either bears semblance to Uzbekistan and Tajikistan, or is closely supported by them. This is why Tajikistan is uniting Tajik and Uzbek tribes under the leadership of Amrullah Saleh, who is himself a Tajik.

At the end of the day, the ultimate goal is the liberation of the Tajiks from the Taliban. Amrullah Saleh, who is leading the ongoing Resistance against the Taliban, is an Afghan nationalist and wants to oust the Taliban. However, at one point, even he wouldn’t mind severing a large part out of Afghanistan as it presently stands, in case it is the only solution to stop the mayhem unfolding under the Taliban’s rule.

Meanwhile, Russia would broadly support any such attempt to create a new nation for Uzbeks, Tajiks and other minorities. Moscow wants to avoid a spillover of Taliban fighters in the garb of refugees into Central Asia and further into Russia from Afghanistan. Creating an independent nation in northern Afghan territories would help avoid any such infiltration of Taliban fighters.