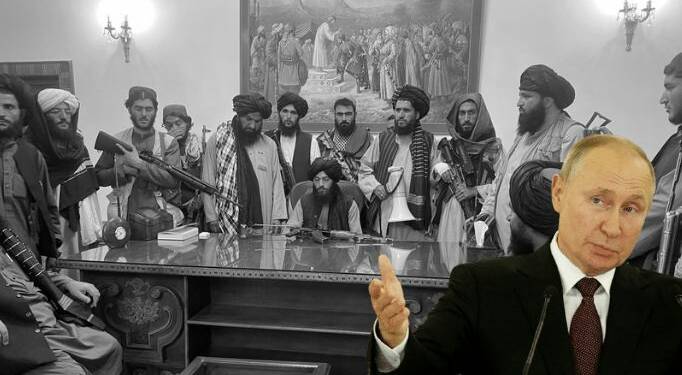 Taliban and its supporters across different parts of the world are celebrating ugly scenes of chaos and violence that have engulfed Kabul and other parts of Afghanistan. They feel that they have emerged victorious with the Biden administration pulling out US troops in a haste. However, the Taliban hasn’t yet won Afghanistan. There is a formidable power in the form of Russia, which seems to be preparing for a long and bloody war against the Taliban.

Russia on Thursday disclosed that it received new orders for arms and helicopters from Central Asian Republics bordering Afghanistan. The latest announcement adds up to a chronology of events since Taliban’s takeover of Afghanistan, which suggest that Moscow is not very comfortable with the Taliban’s resurgence.

Alexander Mikheev, who heads Russia’s state-run arms exporter Rosoboronexport, spoke to the RIA Novosti news agency. He said, “We are already working on a number of orders from countries in the region for the supply of Russian helicopters, firearms and modern border protection systems.”

Russia is empowering ex-Soviet, Central Asian Republics which are particularly vulnerable in the context of the Taliban’s resurgence in Afghanistan. Uzbekistan, Tajikistan and Turkmenistan share borders with Afghanistan’s Northern provinces and are therefore at risk of infiltration of militants or Taliban fighters masquerading as refugees.

Now, by supplying weapons to Central Asian countries bordering Afghanistan, Russia is only making its fight with the Taliban more explicit. Russian President Vladimir Putin himself wants to avoid a spillover of Taliban fighters posing as refugees into Russia via Central Asia.

Recently, Putin said, “They (Central Asian republics) are in one way or another our closest partners and allies. We share common borders, but there are no visa restrictions. Imagine that (Afghan) refugees entered any of these countries. Who is among these refugees, how do we know? There may be thousands of them, or even hundreds of thousands, and maybe even millions. But we and our closest allies do not even have any visa restrictions. And what about our [common] border? It is thousands of kilometers [long]! One can get a car or even ride a donkey, and can go across the steppe. What are we going to do about it?”

Meanwhile, Russia has also refused to recognise the Taliban as the legitimate ruler of Afghanistan. Moscow has made it clear that it won’t go on to acknowledge a Taliban government in Afghanistan unconditionally. At the same time, Tajikistan has also fired up anti-Taliban rhetoric.

After a meeting between Tajik President Emomali Rahmon and Pakistan’s Foreign Minister Shah Mahmood Qureshi on Wednesday, Dushanbe made it clear that it won’t recognise any government in Afghanistan that is formed through “oppression”. In its statement, Tajikistan said, “Evidence clearly shows that the Taliban are abandoning their previous promises to form an interim government with the broad participation of other political forces in the country and are preparing to establish an Islamic emirate.”

Tajikistan has, of course, hit out at the Taliban and humiliated Pakistan at Russia’s behest.

It won’t be surprising if Russia actually takes on the Taliban more directly. In fact, Moscow has an entire history of supporting the fight against the Taliban. In the 1990s, Russia and Tajikistan actively supported the Afghan Northern Alliance in its quest to topple the Taliban.

Even this time around, Armullah Saleh, the interim President of Afghanistan, has formed an anti-Taliban resistance front from the lone free province of Panjshir, which the Talibs cannot dare capture because it is simply beyond them to win it. Now, it won’t be out of context for the Putin administration to support the anti-Taliban front led by Armullah Saleh.

TFI has already predicted how Russia could be helping the anti-Taliban forces in Afghanistan. Russian Foreign Minister Sergei Lavrov himself said, “The Taliban doesn’t control the whole territory of Afghanistan.” This was a subtle message by Russia about how it could explore different options for pushing back against the Taliban.

Recently, there were reports about openly arming the resistance front which is fighting against the Taliban. The Northern Alliance led by Ahmad Massoud and Amrullah Saleh was said to have received military equipment, weapons, and other supplies from Tajikistan on Monday morning. However, Tajikistan has denied these reports.

However, in any case, we can see how Putin is cornering the Taliban in Afghanistan. The Russian President is arming the Taliban’s enemies in Central Asia, so that when push comes to shove, all these countries can chip in and help Russia fight the Taliban. Therefore, all is not lost in Afghanistan as Moscow seems to prepare for a long-drawn battle against the militant group.