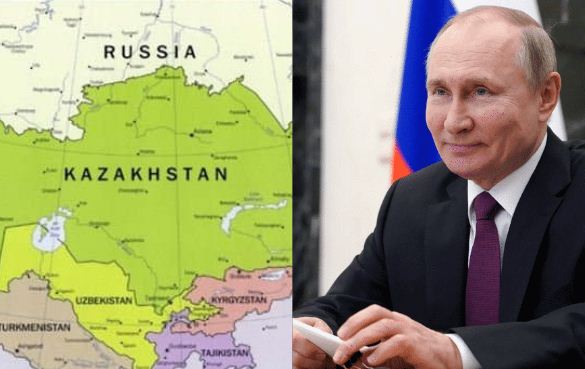 China may have befriended Taliban for expanding influence in resource-rich Afghanistan and the region surrounding it, but Russia is now countering Chinese influence in the region by creating a Sovietistan. We are referring to the Muslim nations of erstwhile USSR, which got separated from Russia during the Soviet disintegration. These countries located in Central Asia have moved closer to Islamism and China after Soviet disintegration, but Russian influence continues to persist in the region till date.

After the US decided to withdraw its troops from Afghanistan, China started to flex its muscles by supporting a resurgent Taliban in the war torn country. However, Moscow is closely watching the latest developments in Afghanistan and it has also started cooperating closely with Central Asia countries of Uzbekistan, Tajikistan and Turkmenistan.

Central Asia consists of five nations- Kazakhstan, Kyrgyzstan, Tajikistan, Turkmenistan and Uzbekistan. Of these five countries, only Uzbekistan, Tajikistan and Turkmenistan share borders with Afghanistan’s Northern provinces. And therefore, these three countries are the ones directly concerned with the rise of Taliban in neighbouring Afghanistan.

The Central Asian countries bordering Afghanistan are particularly concerned about Taliban fighters in Northern Afghanistan who have reached the borders. There is a familiar sentiment of nervousness across Uzbekistan, Tajikistan and Turkmenistan, because even in the 1990s, the Taliban had occupied many Northern Afghanistan districts in a similar fashion. At the time, the effects of the tumult inside Afghanistan had spilled over into Central Asia.

Tajikistan is, in particular, getting exposed to the consequences of Taliban’s resurgence in Afghanistan over the past one month or so. On July 7, over 1,000 Afghan refugees reportedly crossed over into Tajikistan’s eastern Gorno-Badakhshan region.

In fact, Yodgor Fayzov, the head of the Gorno-Badakhshan province, had asked local officials to prepare for entry of 10,000 refugees though he warned that the number could climb as high as 30,000.

As for the Afghan security forces, 134 personnel crossed over into Tajikistan on June 21 after Taliban took control of a border post at Shir Khan Bandar. On July 5, Tajikistan revealed that 1,037 Afghan troops had fled into Tajikistan and were being allowed to stay “for humanitarian reasons.”

And then, the effects of Taliban’s belligerence in Afghanistan do reach Kazakhstan too. The Biden administration has, for example, requested Kazakhstan to take in some of the Afghans who had assisted US military invasion in Afghanistan. A share of the humanitarian burden of the conflict created by Taliban is likely to fall on Kyrgyzstan and Kazakhstan, which is why they also become interested parties.

In this context, Uzbekistan, Tajikistan and Turkmenistan realise that they do need external support for handling the growing threat called Taliban. And when it comes to security assistance in Central Asia, the region becomes Russia’s “exclusive sphere of influence”. Russian President Vladimir Putin not letting this opportunity go. And over the past one month or so, Moscow has encouraged cooperation with Central Asia in light of Taliban’s increasing influence.

On July 16, the Foreign Ministers of Russia and five Central Asian nations issued a joint statement on “the developments in Afghanistan.” It read, “The participants noted that the situation in Afghanistan is a source of deep concern due to the withdrawal of foreign troops from that country and the subsequent escalation of hostilities between government forces and the Taliban, especially in the northern provinces bordering on the Central Asian states.”

The reference to “Northern provinces” made it clear that Russia and Central Asian nations are worried about the effects of the Taliban’s activities spilling over into their territory.

The joint statement by Russia and the five Central Asian nations has been followed by Russian military drills with Tajikistan and Uzbekistan. Troops from Russia and Uzbekistan are presently participating in five-day exercises. The drill is taking place near the Afghanistan border.

A much bigger drill will take place in Tajikistan from August 5-10, in which troops from Russia, Tajikistan and Uzbekistan will participate. The nature of these drills is to test the capability of military forces to tackle a civil war-like situation associated with Taliban.

Tajikistan’s Defence Ministry said that the drills will include 300 armoured vehicles, 25 combat and transport helicopters, apart from declaring undisclosed number of fighter aircrafts, bombers and artillery. The kind of equipment being deployed seems tailor-made to handle Taliban.

Russia’s military drills and cooperation with the Central Asian nations is entirely aimed against China’s increasing proximity with Taliban. To be precise, Taliban has gone as far as saying that China is a ‘friend’ of Afghanistan. In fact, a Taliban delegation led by Mullah Abdul Ghani Baradar even held discussions with Chinese Foreign Minister Wang Yi in a clear display of camaraderie between Beijing and Taliban.

China is strengthening Taliban even at the cost of regional stability, and now Russia is coming out to rescue the region of the China-Taliban axis.

Russia is involving all five Central Asian nations in its broad strategy to pre-empt any spillover effect likely to be created by Taliban’s aggression within Afghanistan. Moscow is reviving its Soviet-era ties for the purpose. In fact, Russia already maintains very good relations with Tajikistan and enjoys ample military presence with a magnificent base in the Central Asian country.

On the other hand, ties had turned frosty between Uzbekistan and Russia after the Soviet disintegration. Chinese investments in Uzbekistan have been a factor that have created a gulf between the two countries, but it seems that with Taliban knocking at its doors, Tashkent is actually looking out for better ties with Moscow.

Russia knows that Central Asian nations want to avoid suffering any spillover effect on account of Taliban’s resurgence. And therefore, Putin is giving them all the security assistance they want as a part of his strategy to create a Sovietistan countering China’s Taliban.