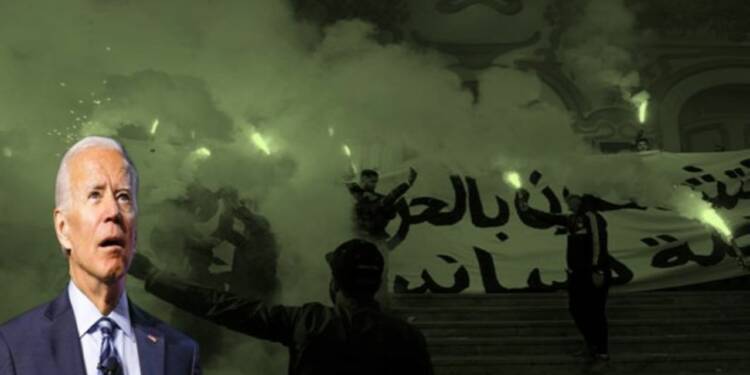 The United States has lost North Africa. This region has emerged out of the clout of Washington and is carving an independent path for itself. The Biden administration has undertaken successive blunders in North Africa that have alienated countries in this part of the world away from Washington. Take the case of what Joe Biden tried doing in the Horn of Africa. By dominating the Horn of Africa, the U.S. can dominate the Bab al Mandeb Strait, which connects the Red Sea with the Gulf of Aden, and through which much of global trade passes.

The U.S. can dominate this strait only if it controls the Horn of Africa, and to establish that Joe Biden tried pushing Ethiopia into a civil war with all his might. This was his first blunder.

Ethiopia has quelled the rebellion of the Tigray People’s Liberation (TPLF). The Biden administration had, at the peak of the conflict late last year, accused Ethiopia and its forces of committing human rights violations in Tigray. As a consequence, the White House was preparing for a “humanitarian intervention” in the second most populated country in Africa.

The Biden administration had made all plans to militarily intervene and wage war against Ethiopia. However, it made such plans on the assumption that Ethiopia’s neighbours would participate in such an immoral war.

Washington was to use its base in Djibouti to launch attacks on Ethiopian forces and assets. Djibouti, however, said its territory cannot be used by the U.S. for attacking other countries. Meanwhile, Eritrea had deployed its soldiers to aid Ethiopia’s forces in their fight against the TPLF. Sudan and Somalia helping the United States was always a non-starter. Sudan is influenced by Russia, while Somalia has a historic axe to grind against Washington.

Read more: Biden is ready to spoil US ties with Arab nations, Greece, Cyprus and France just to punish Russia

Basically, the Biden administration’s support for the TPLF is what ruined the United States’ image and prospects in the Horn of Africa. This also impacted Washington’s reputation in North Africa as a whole. However, Biden’s second blunder is what has disgusted North African nations to their guts.

The United States had somewhat amicable relations with Morocco. You see, the Trump administration got Morocco to sign the Abraham Accord with Israel, in exchange for recognition of Moroccan sovereignty over the phosphate-rich Western Sahara.

But Morocco has been rethinking its stance, partly due to the Biden administration trying to get cosy with Algeria. Currently, Joe Biden is trying to snatch Algeria away from the Russian sphere of influence. That is not really working out like Washington would want it to. As the U.S. remains distracted, Russia and OPEC are making a move to snatch Morocco away from Washington.

The Organization of the Petroleum Exporting Countries (OPEC) has announced a $100 million loan to Morocco aimed at promoting financial inclusivity. The loan to Morocco is, in part, aimed at driving it away from Washington and into the Arab camp. Given the fact that the Biden administration has maintained a stoic silence on the issue of Western Sahara and whether it considers the region a part of Morocco, Rabat is reconsidering its wholehearted subservience to Washington.

Read more: An irritated Biden wanted Sudan to shun ties with Israel; Sudan shut him up with its response

As for Algeria, it is deeply influenced by Russia. Algeria is the EU’s third-largest gas provider (behind Russia and Norway), supplying approximately 8% of the EU’s gas supplies in 2021 via pipelines across the Mediterranean Sea. Algeria also has a liquefied natural gas (LNG) terminal to export gas via ship. Snubbed by OPEC and the Arab world at large, the Biden administration is trying to woo Algeria now – with the sole intention of securing its gas supplies.

But Algeria is squarely placed in the Russian camp. Russian companies have many investments, deals and assets in Algeria. There are also various joint ventures and partnerships between Algerian and Russian state corporations. Both the governments have several deals in the field of energy exploration, storage and supply projects across Algeria.

Additionally, Algeria relies on Russia for its defence infrastructure and arms supplies. There is an added disadvantage for the United States when dealing with Algeria. You see, Algiers has been at odds with Washington on neighbouring Libya and on Syria. Algeria opposed the NATO-led military action that helped overthrow the regime of Muammar Qadhafi. Algeria also maintains relations with the Assad regime in Syria despite Washington’s efforts to prevent the broad reintegration of Assad into the Arab fold.

Therefore, the second blunder that the Biden administration made in North Africa was maintaining an ambiguous stance on the issue of Western Sahara. It antagonised Algeria even more by not reversing the Trump-era recognition of the region as Moroccan territory, while also unhinging Rabat by not affirming its support for the Trump-era deal.

North Africa is fast emerging as the backyard of the Russians. Owing to Biden’s brazen policies, the United States seems to have lost the crucial region forever.