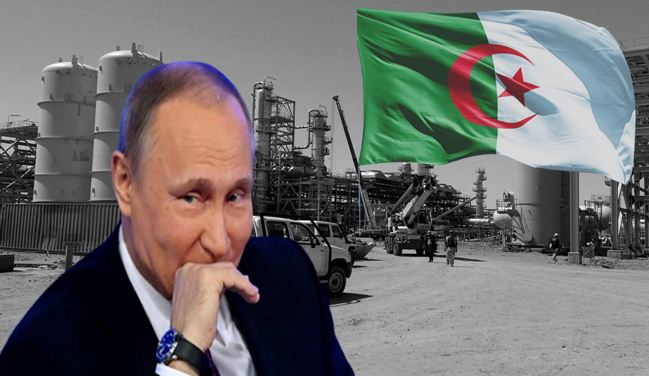 Due to the ongoing Russia – Ukraine crisis, Algeria, a North African country is dragged into the limelight for its gas supplies to Europe. Algeria is the EU’s third-largest gas provider (behind Russia and Norway), supplying approximately 8% of the EU’s gas supplies in 2021 via pipelines across the Mediterranean Sea. Algeria also has a liquefied natural gas (LNG) terminal to export gas via ship.

This is the reason why Biden wants Algeria to supply more gas to Europe. The move comes as Washington intensifies efforts to find alternative gas supplies for Europe in case any disruption arises from the standoff between Russia and Ukraine. But it seems that Putin is already a few steps ahead of Biden with plans to keep Algeria in its own sphere of Influence. Putin manoeuvres his plan through Investments, deals and other assets that Russian companies have in Algeria.

Also Read: Algeria-Morocco Crisis: The first American war in a long time which is not for oil but for food

Russian companies have many investments, deals and assets in Algeria. There are also various JV’s and partnerships between Algerian and Russian state corporations. Both the governments have several deals in the field of energy exploration, storage and supply projects across Algeria.

Sonatrach, Algeria’s state energy firm has a myriad of deals, agreements and MOU’s with Russia’s Lukoil for partnerships in production, storage, supply and exploration in the North African country. Gazprom EP International, a subsidiary of Russian gas giant Gazprom GAZP.MM, is already in talks with the Algerian government to expand its already large footprint through several new investment opportunities in Algeria and to boost partnerships with state energy firm Sonatrach.

The deals and investments from Russian companies contribute majorly to Algeria’s FDI and its economy, besides which most of the deals between the two countries are focused on investments in exploration, production, transport and developing gas infrastructure as well as gas marketing, thus generating a lot of employment in the North African country.

It’s Russia vs the US in Algeria:

Algeria’s reserves of natural gas have raised their significance as European countries race for alternatives to Russian supplies. It is clear that Algeria is stuck between a rock and a hard place, it could accept Europe’s money or Russia’s long and reliable friendship. Supplying gas to Europe could help the country’s financial situation, but in turn, it could negatively affect the strong and growing relations between Algeria and Russia.

Why Algeria will definitely choose Russia over the US and Europe?

Russia is not just relying on huge investments, deals, agreements, JV’s, partnerships and projects in Algeria, but it is also on the move of expanding it. It has remained a strong and reliable partner to Algeria in terms of defence and arms supplies. If Algeria agrees with the US and decides to export more gas to Europe, it will weaken Russia’s upper hand over the EU in the Ukraine crisis. It would definitely damage Algeria’s and Russia’s long reliable friendship.

There lies another major cause. The Algerian government has demonstrated its willingness to sometimes weigh regional politics more heavily than its interests as a gas exporter. Algeria strongly opposed the Trump administration’s decision in December 2020 to recognize Morocco’s claim of sovereignty over Western Sahara, a reciprocation for Morocco’s agreement to join several Gulf states (the United Arab Emirates and Bahrain) in normalizing relations with Israel. Algeria supports the Polisario Front, which seeks independence for the disputed territory. The U.S. decision on Western Sahara, not reversed by the Biden administration, still roils the US – Algeria relation thus contributing to Algeria breaking its formal diplomatic relations with Morocco in August 2021.

Algiers has also been at odds with Washington on neighbouring Libya and on Syria. Algeria opposed the NATO-led military action that helped overthrow the regime of Muammar Qadhafi. Algeria also maintains relations with the Assad regime in Syria despite Washington’s efforts to prevent the broad reintegration of Assad into the Arab fold.

In every scenario, Russia seems to be winning the Algeria game. Keeping the North African country into its sphere of influence would be a big blow to Biden’s plans about Algerian gas. Biden will not just fail in providing a Russian gas alternative to Europe but he will also lose control over this energy-rich region in the long run.