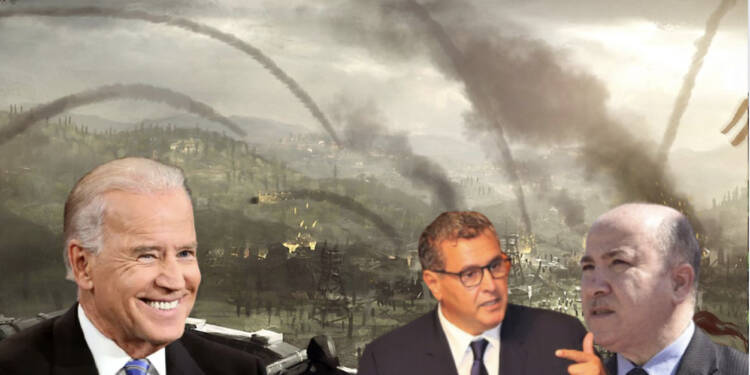 Former US President Donald Trump loved peace. However, his successor, Joe Biden hates peace and loves armed conflicts. Take the example of Morocco and Algeria. The two North African countries were locked in a longstanding conflict over the territory of Western Sahara, which is presently controlled by Morocco. Trump had managed to cool down the situation by recognising Morocco’s claims over Western Sahara. However, Biden is destabilizing the situation by reversing Trump’s policies and emboldening Algeria. Over the past two months, tensions have been escalating between Algeria and Morocco, and the two countries are now at the brink of a big conflict.

Morocco and Algeria- a 60-year old history of conflict

The Morocco-Algeria borders were not strictly defined by the French and two mineral-rich territories- Bechar and Tindouf remained undefined even after a French invasion. In 1952, France decided to integrate Bechar and Tindouf with Algeria. Four years later, Morocco gained independence and demanded the return of the two disputed territories, though the demand was shot down by the French.

During the colonial era, Morocco had supported Algeria and had even denied a negotiation with France while agreeing to hold a dialogue with Algeria over the disputed territories. However, after Algeria gained independence from the French in the year 1962, it refused to make any territorial concessions. The two countries even went to a brief armed conflict called the Sand War over this issue in 1963, which resulted in a military stalemate that hasn’t been resolved till date.

As if the Sand War wasn’t enough, Spain vacated the Spanish Sahara (now called Western Sahara) in the year 1975. Morocco staked claim over the region and Spain, which was clearly not in the mood to fight a battle over territorial claims, allowed Morocco to take over without really caring much about what the local Saharawi people wanted.

Western Sahara soon becomes a geopolitical issue. Algeria wanted control over Western Sahara as the region gave it direct access into the Atlantic without having to go through the Gibraltar Strait located near Algeria’s enemy- Morocco.

Therefore, Algeria decided to back the Saharawi Arab Democratic Republic/ Polisario Front in a 16-year long war against Morocco that has claimed thousands of lives till date. In 1991, there was a ceasefire and some hope of peace.

However, a civil war broke out in Algeria soon and Algiers alleged that Rabat supported the Armed Islamic Group of Algeria, an Islamist terror group. The allegation was refuted by Morocco, but the relationship had already got fractured and the borders between the two North African countries were closed in 1994. Till date, the Algeria-Morocco border remains closed.

On the other hand, Morocco itself supports a separatist movement in northern Algeria’s Kabylia region where the Kabyle people demand independence from Algeria. This has led to further diplomatic tensions between Rabat and Algiers.

Meanwhile, foreign actors have got involved in the Morocco-Algeria tensions. While Morocco has emerged as a US ally like other Arab Kingdoms, Algeria became a Soviet ally due to its anti-colonial sentiment.

How Trump ensured peace and how Biden ruined it

Trump tried to undermine the Algeria-Morocco territorial tensions. Last year, Morocco normalised relations with Israel in exchange for the United States’ recognition of its sovereignty over Western Sahara.

Whatever the history of the region may be, Trump’s decision discouraged the Polisario Front and ensured that Western Sahara was freed from the clutches of terrorists or so-called rebels. At the same time, getting Morocco to sign an Abraham Accord was a diplomatic victory for Donald Trump and the United States of America.

However, after coming to power, Biden decided to undermine Trump’s diplomatic exploits in North Africa and started a reversal of Trump-era policies. In August, Biden tweeted a map containing the White House logo that did not take into account the December 2020 recognition of Morocco’s sovereignty over Western Sahara. The tweet was deleted later, but it had already emboldened Algeria and its militias in the disputed region.

Algeria and Morocco are on a collision course

On August 24, Algeria severed its limited bilateral ties with Morocco and accused it of causing wildfires in the Kabylia region that has claimed the lives of dozens of Algerian armed forces personnel. Thereafter, Algeria also closed its airspace to Moroccan aviation.

Meanwhile, the European Union is further emboldening Algiers. Recently, the European Court annulled the EU-Morocco agriculture and fishing trade deals, while holding that they were not agreed to with the consent of the people of Western Sahara.

On the other hand, Israel is backing its new ally Morocco. Israel and Morocco are encouraging deeper military cooperation. In fact, the Jewish nation is also ready to manufacture drones in Morocco. At the same time, the Jewish nation can also help Morocco maintain pressure on the Biden administration for maintaining Trump-era policies instead of taking a new stance.

Also read: Hamas is trying to create fissures in the Abraham Accord alliance. Morocco is the first target

Quite clearly, Algeria is acting like a truly belligerent nation and it even has the backing of Turkey, a terror-promoting regime that can also help Algeria spread jihadist militants in the Western Sahara region. Meanwhile, a stubborn Biden is undermining Trump’s diplomatic exploits and pushing Algeria and Morocco towards an all-out war.