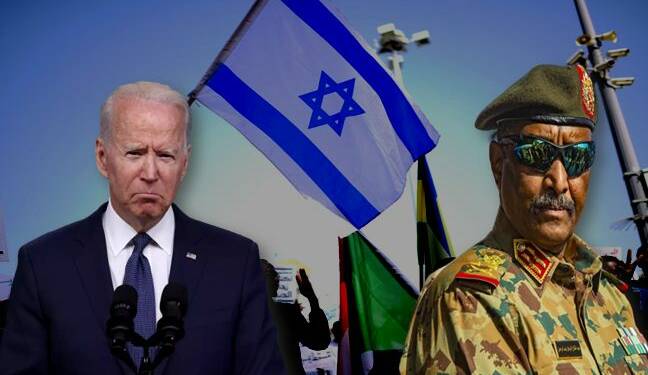 US President Joe Biden has been trying to undermine Israel’s interest in the Middle East and North Africa (MENA) region. First, he was just appeasing Iran at Israel’s expense. And now, he is going as far as Sudan in a bid to harm Israel.

Sudan presently has a military leadership, which is close to both Russia and Israel. This works for Israel because the civilian government under former PM Abdalla Hamdok wasn’t very keen on warming up to Tel Aviv. But this doesn’t work for Biden, because of the obsessive hatred he displays towards Russian President Vladimir Putin. So, he is attempting to take down the Sudanese military by driving a wedge in Sudan-Israel relations.

Before getting into what Biden is aiming to, let me explain the context of the Sudan-Israel-Russia relationship and the role of the US.

Sudan wasn’t on good terms with Israel for the past few decades. But in 2020, former US President Donald Trump mediated an Abraham Accord between the two countries. The civilian government led by Abdalla Hamdok was reluctant to embrace the Jewish nation due to adverse public opinion, while the Sudanese military seemed favourable. But ultimately, the agreement was in place.

The US-mediated Abraham Accord ended decades of resentment between Sudan and Israel. Yet, the political climate in Sudan was such that a civilian government couldn’t have embraced Israel. On the other hand, the Sudanese military that wants to fight militant groups was keen on a better relationship with Jerusalem.

And then arrived Russia. Last year, there was a military coup in Sudan, led by Lt. Gen. Abdel Fattah al-Burhan. The reaction of Russian officials suggested that Lt. Gen. Burhan had Moscow’s backing. For Biden, this was a setback as the Sudanese military growing rapport with Russia will invariably end up sidetracking the US.

Israel however benefitted because the Sudanese military leadership has encouraged cooperation with the Jewish nation. Sudanese and Israeli officials have made unannounced visits over the recent past. Last week saw Sudanese security delegation visit Tel Aviv. In January, Israeli officials, including Mossad officers, had visited Khartoum.

Read more: Biden has abandoned TPLF but is still dreaming of invading Ethiopia through Sudan

So, if Israel benefitted from the Sudanese military takeover, what should have Biden done? Well, Biden’s poll promises about coordination with US allies would suggest that the US should let it be.

But Biden had other plans. He decided that he will marginalise the Sudanese military and try to bring back the civilian regime because that favours his administration.So, he decided to launch blistering criticism with violations of human rights allegations. An obvious reaction from the Biden administration.

The Biden administration alleges that protesters have been killed in Sudan. On the other hand, Burhan suspects the involvement of “outside groups” in the ongoing turmoil. US officials are also saying that it is looking into options to respond to them. Biden administration officials are threatening sanctions against the Sudanese military leadership in a bid to weaken it. Biden’s actions give a sign that the US tightens their attempts to bring back a civilian regime.

Read more: The West seems to want another partition of Sudan, but this time it won’t be easy

Biden wants to weaken ties between the Sudanese military and Israel

Biden seems to be going as far as sabotaging Sudan-Israel security cooperation in his ongoing campaign against the Sudanese military. This is why Burhan was seen pushing back against threats of Western sanctions during an interview with Sudan’s state-run TV on Saturday. He was also seen defending Israel-Sudan ties.

Burhan made it clear that Israel-Sudan ties aren’t clear in a likely attempt to avoid any local outrage over the bilateral exchanges between Israeli and Sudanese officials. He said the exchange of intelligence with Israel had helped Sudan crackdown on suspected militant groups that “could have undermined the security of Sudan and the region.”

Burhan also said, “Sanctions and the threat of them are not useful.” So, this is Sudan’s way of telling Biden that arm-twisting tactics won’t see light in Khartoum.

For Biden, instigating anti-military sentiment in Sudan is of prime importance. However, Burhan has shut him up with his response by proclaiming that Israel and the Sudanese military will keep cooperating, regardless of Biden’s empty threats.