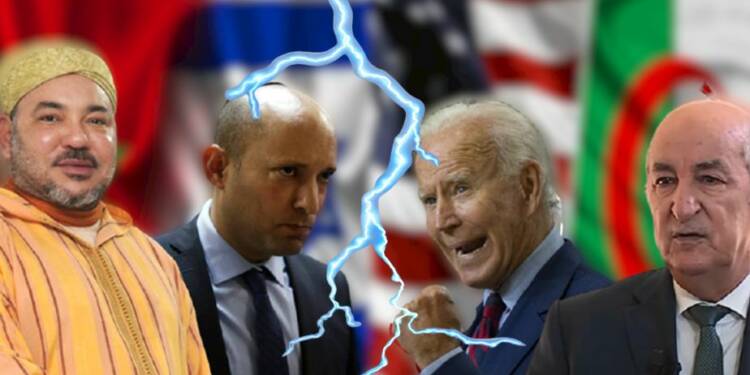 North Africa is extremely hot, extremely dry and is replete with extremism. Seven countries are considered a part of North Africa, and these are: Algeria, Egypt, Libya, Morocco, Sudan, Tunisia, Western Sahara. But here’s the deal. About 80 per cent of Western Sahara is controlled by Morocco, and that pretty much tells us the story of this region. There’s also the Algeria angle here. Algeria lies to Morocco’s east. So, Algeria primarily remains landlocked, and therefore, it has been eyeing the Western Sahara for itself. Algeria wanted control over Western Sahara as the region gave it direct access into the Atlantic without having to go through the Gibraltar Strait located near Algeria’s enemy – Morocco.

In recent times, the story of Algeria and Morocco is the story of two men. These men are Donald Trump and Joe Biden. We do not really believe in complicating geopolitics. To put it very simply, Donald Trump worked to establish peace in North Africa, and the very first way of doing that is to ensure peace is restored between Morocco and Algeria. Joe Biden, on the other hand, perhaps serves at the mercy of America’s military-industrial complex, and so, he is trying to stoke conflict between Morocco and Algeria.

Israel and Morocco had normalised relations last year, as part of the Abraham Accord deals brokered by the Trump administration. In exchange for Morocco’s recognition of Israel and establishment of ties with the Jewish nation, the Trump administration had recognised Western Sahara as part of Morocco. Joe Biden, being the notorious fellow he is, does not seem keen to continue with the U.S.’ recognition of Western Sahara as Moroccan territory. This is what has been upsetting many equations in North Africa, apart from strengthening Algeria’s claim on the region.

In comes Israel. Israel and the U.S.’ ties have not been flourishing under the Biden administration. And now, Israel is beginning to wage a shadow war on Joe Biden by taking ties with Morocco to the next level. Israeli Defense Minister Benny Gantz will pay a visit to Morocco next week. Gantz is expected to sign a defense deal with Rabat during his visit, and to meet with his counterpart, apart from the Moroccan foreign minister.

Hundreds of thousands of people in Israel are estimated to be of Moroccan origin. Some 2,000-3,000 Jews remain in Morocco, making it home to North Africa’s largest Jewish population. Therefore, it only makes sense for the two countries to upgrade ties, and the same will not be taken kindly by the Biden administration, which is keen to stoke tensions in North Africa.

After coming to power, Biden decided to undermine Trump’s diplomatic exploits in North Africa and started a reversal of Trump-era policies. In August, Biden tweeted a map containing the White House logo that did not take into account the December 2020 recognition of Morocco’s sovereignty over Western Sahara. The tweet was deleted later, but it had already emboldened Algeria and its militias in the disputed region.

An emboldened Algeria severed its limited bilateral ties with Morocco in August and accused it of causing wildfires in the Kabylia region that has claimed the lives of dozens of Algerian armed forces personnel. Thereafter, Algeria also closed its airspace to Moroccan aviation.

At the behest of Joe Biden perhaps, the European Union is also upping the ante against Morocco. Recently, the European Court annulled the EU-Morocco agriculture and fishing trade deals, while holding that they were not agreed to with the consent of the people of Western Sahara. So that’s that.

For more on the Morocco – Algeria conflict, read: Biden pushes Morocco and Algeria towards a full-blown war

A defense deal being signed between Morocco and Israel, quite frankly, is unprecedented. Yet, Joe Biden has created an atmosphere of instability in North Africa, the Middle East and the Horn of Africa. All of this merits Israel making new allies and strengthening its non-U.S-centric partnerships.

Read more: Israel prepares to lay siege on Iran as Biden and Merkel push to revive the Iran nuclear deal

Already, in 2020, Morocco had purchased three Heron drones, a type of reconnaissance military equipment, from Israel for an estimated $48 million. Morocco now uses these drones in the Western Sahara region to combat extremist groups and rebel movements mostly supported by Algeria in its fight against Rabat. That itself shows how Israel recognises Western Sahara as Moroccan territory, which should have been reason enough for Biden to not cuddle with Algeria.

Now, with an all-out defense agreement slated to get in place between Morocco and Israel, things are about to get quite intense for the Biden administration in the region, whose interests will invariably take a hit as the Jewish nation wages a shadow war on Washington in North Africa.

Eritrea is what Biden really wants, Ethiopia is just a pit-stop