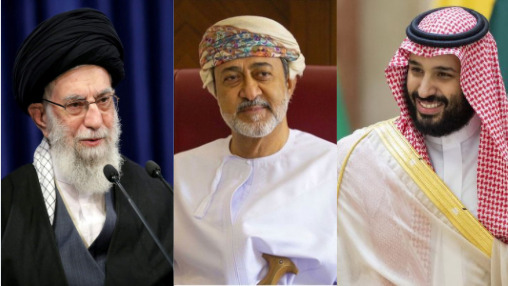 Oman is a moderate Arab nation. It has ties with all the regional powers in the Middle East. However, on 10th July 2021, Oman’s foreign minister announced that Oman will not be the third nation to join the Abraham accords and normalize ties with Israel. However, on 12th July it was reported that the Sultan of Oman had landed in Saudi Arabia on Sunday, the first time in a decade. It is a sign of shifting alliances in the Persian Gulf as Saudi reaches out to powers with closer ties to Iran.

Oman’s announcement to not normalize relations with Israel is a sign of low political confidence in the leadership of the nation. Oman’s former leader Qaboos bin Saad died last year on 10th January. He was a strong leader with the confidence of the people of Oman. His successor Haitham bin Tariq Al Said took over the reins and has been ruling ever since. But since then he has not enjoyed the same confidence as his predecessor as displayed by the hesitancy in joining the Abraham accords.

Oman is a moderate Arab nation with good ties across the region. It was earlier reported that Saudi Arabia and Iran met in April. It was their first high-level meeting since Riyadh severed diplomatic ties with Iran in 2016. In May, a second-round was held in Baghdad. There isn’t likely to be a complete regional breakthrough anytime soon, and the two parties have yet to agree on particular steps. However, these meetings are signs that a major rearrangement of regional alliances is currently underway in the Middle East. The first two rounds went well enough to merit a third round, which will most likely take place in the coming weeks.

Read More: A rail network, a gas pipeline and a brand new mega city– The Abraham Accord is getting stronger, and Turkey-Iran are livid

Saudi Arabia and Iran are regional rivals. Riyadh sees itself as the leader of the Sunni and even Muslim world, while Iran styles itself as the flag bearer of the Shiite camp supporting movements. However, talks held in Iraq earlier had limited scope and manoeuvrability as they majorly focused on the conflict in Yemen. But the visit of Oman’s sultan to Saudi Arabia is going to change the focus of the talks between Iran and Saudi Arabia.

Oman has always played the role of a facilitator in the region. Iran and Israel are regional rivals therefore, it was necessary for Oman to subdue any talks or Abraham accords to normalization of ties with Israel. Oman presents itself to Saudi and Iran with a certain level of neutrality and goodwill with their diplomatic approach to the regional conflicts.

If the reports are to be believed the talks between Saudi and Iran will shift to Oman and thus the scope of engagement between the two regional rivals could be extended as opposed to when the meetings took place in Baghdad where proxies for both the parties were in conflict.

However, Oman’s neutral facilitation cannot last long. In a rare visit to Saudi Arabia, the leader of Oman signed a Memorandum of understanding to establish a joint coordination council that aims to coordinate their stances in all fields.

Read More: To get protection and some short term benefits, Jordan has signed a deal to become another Iranian client state

Saudi Arabia, a big player in the region and a proponent of the Abraham accords will push Oman to normalize ties with Israel. Relations between Oman and Saudi Arabia had long been cold despite their shared border. A closer relationship could be an economic boon for Oman, which is struggling to diversify its economy away from oil.

Earlier, states which had signed the Abraham accords were presented huge concessions and gifts for normalizing their ties with Israel. UAE, Bahrain and Sudan, all states with a strong leadership backed by Saudi Arabia restored relations with the Jewish state despite opposition from the rest of the Arab world.

Oman’s outreach to Saudi Arabia will boost the leader’s domestic confidence and with Saudi Arabia backing the moderate Arab state, it won’t be long before Oman ties hands with Israel under the umbrella of the Abraham Accords.