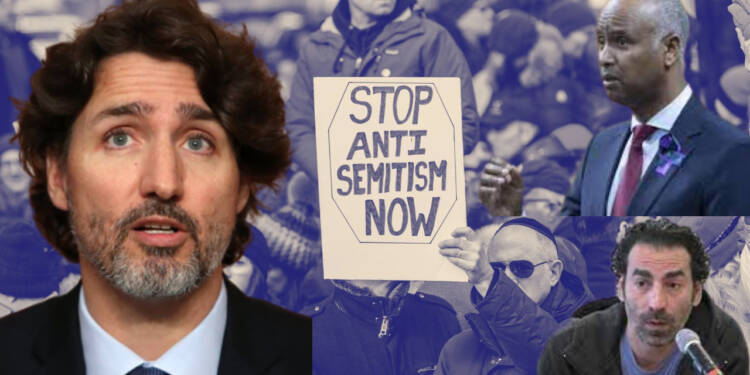 Here is another story from Canada. Unsurprisingly, this one is also filled with hypocrisy. When it comes to supporting minorities, Trudeau’s government has shown unequivocal support for Islamists and Khalistanis in order to win votes. The rest of the minorities, on the other hand, who do not fit into his appeasement policies are subjected to insults and hatred. For instance, if you are a Jew, you will be called “bitches of white master.” And all of this is approved under Trudue’s regime claiming to be a champion and defender of human rights and inclusivity. This is the truth corroborated by yet another incident discussed down below.

A quick introduction to the major characters in the story. Ahmed Husen is the current Housing, Diversity and Inclusion minister in Trudeau’s outlandish and bizarre regime. Irwin Cotler is Canada’s special envoy on Anti-Semitism, personally hand-picked by Trudeau himself. And finally, the star of the show is a senior consultant at a government-funded anti-racism project, named Laith Marouf.

Last year, the Community Media Advocacy Centre (CMAC), an organisation meant to promote harmony and peace between diverse communities in the country, received a $133,800 Heritage Department grant to build an anti-racism strategy for Canadian broadcasting. Laith Marouf was listed as a senior consultant on the project and is quoted as saying that the “CMAC is “excited to launch the “Building of an Anti-Racism Strategy for Canadian Broadcasting with funding support from Canadian Heritage’s anti-racism action program.”

However, Marouf is also quoted as saying this about the Jewish people on his private Twitter account…

“You know all those loud mouthed bags of human feces, aka the Jewish White Supremacists; when we liberate Palestine and they have to go back to where they come from, they will return to being low voiced bitches of [their] Christian/Secular White Supremacist Masters.”

astounding—even by the low standards set by all the various other grifters, hysterics, & haters paid out by Ottawa's various "anti-racism" slush funds: The same guy ranting about how Jews are "bags of feces" was hired by @CdnHeritage to train Cdn broadcasters in "anti-racism"… https://t.co/9OeihgNQ5n pic.twitter.com/FjWRLjU8xY

Just a little perspective, this is a tweet by a senior consultant in the CMAC, an organization that was given a hefty grant to build an Anti-Racism strategy. Ahmed Husen and Irwin Cotler immediately went into troubleshooting mode when Marouf’s real thoughts about Jews came to light.

Husen says he finds the tweets “disturbing” and that it is “unacceptable behaviour.” He also says he is taking action against Marouf. But only God knows what that action is.

Cotler, meanwhile, has responded by saying that Marouf’s comments are “beyond the pale” i.e completely unacceptable and outside the bounds of rational behaviour.

Shimon Koffler Fogel, president and CEO of the Centre for Israel and Jewish Affairs, said Canadians “should be appalled” by these tweets.

“Canadian Heritage must review its oversight policies to ensure Canadian taxpayer dollars are provided to groups committed to cherished Canadian values and to combating racism, hate and discrimination,” he said.

Anti-Semitism is on the rise in several parts of the world. And even Trudeau’s Canada does not appear a safe place for Jews. It is also worth noting that their increased suffering coincides with the fact that Islam is the fastest-growing religion in Canada.

Read More: A deserted church in Ottawa has scared the living daylights out of Trudeau

In short, the Trudeau government handed money to an organisation responsible for promoting peace and harmony among different races and was looking for support from Liath Marouf, a bigot himself. His views and ideas are now publicly known. Marouf’s lawyer tried protecting him by saying that the tweet refers to “Jewish white supremacists”. What a bozo. Jewish white supremacists are as real as peaceful Islamists: Both of them DO NOT EXIST.