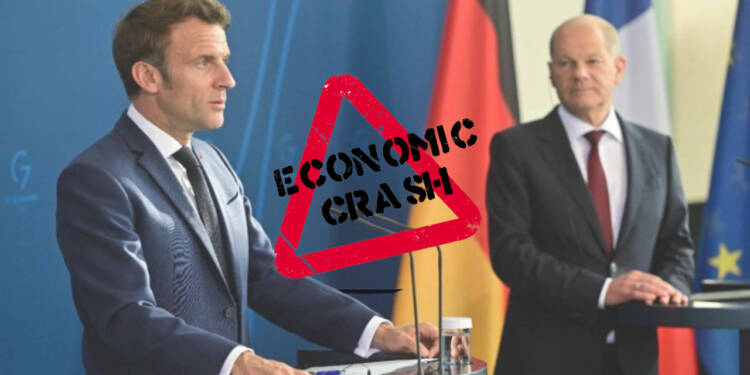 German coffers are completely drained. As the Ukraine war drags on, energy prices have skyrocketed due to Russian supply constraints, making it increasingly difficult for people to manage their daily lives.

The situation in Berlin is indeed heartbreaking. Now, to push the economy back on track, the German Chancellor has attempted to flog a dead horse with some breath.

However, the EU’s Blue Eyed Boy, Emmanuel Macron, appears to be in no mood to comply with his diktat, so Olaf’s desperate attempt to save his ruined economy has failed once more.

According to Spanish media reports, France has reportedly turned down Germany and Spain’s request to restart The Midi-Catalonia Pipeline, also known as MidCat project. Reportedly, the French ministry led by Agnes Pannier-Runacher in an emailed statement has stressed: “Such a project would require, in any case, many years [for it] to become operational,”

Madrid and Berlin are working hard to restore the Midcat project. But Paris doesn’t seem to be convinced by the project. For those who don’t know, the MidCat project( first pitched in 2015) was revived in May 2022 after concerns that an impending energy crisis would erupt as a result of reductions in gas supplies from Russia.

The MidCat project aims to build a gas transit network connecting Germany and Spain that will pass through France and has a capacity to move more than 7.5 billion cubic meters of gas.

As the Russian energy supplies hit a roadblock, Germany made the decision to head straight for Spain in an effort to revive the Midcat project and reduce its reliance on Russia. However, France reportedly believes that such a project would be more disastrous to the already struggling economies of Europe.

Paris stresses that Berlin’s plan is impractical and stupid. The French ministry irks that it would take many years to complete just the planning and other documentation related to such a project. Moreover, the MidCat project is unlikely to help with the current energy crisis in the EU or the potential shortages this winter.

Furthermore, French Ministry stresses that constructing such a pipeline might also interfere with climate goals, adding that “to meet both the current energy challenge and the climate challenge, we will have to reduce our gas consumption and accelerate the development of carbon-free energy [sources].”

Amid the Russia-Ukraine tensions rising, the project was revived in 2022 by Germany. Just a week ago, German Chancellor Olaf Scholz proclaimed that a pipeline running through Portugal, Spain, and France to central Europe is “conspicuously absent” and if it existed, it could make “a massive contribution” to easing the energy supply crisis.

Germany stressed that it was actively “in talks” with French President Emmanuel Macron and the EU Commission head Ursula von der Leyen over the project. But now, the chances of its revival look grim.

Germany believes that by establishing the Midcat at the earliest, it could bail out its sinking economy and restore its glory days of being an economic powerhouse. But, France continues to remain a major thorn in its ambitions.

Is France concerned about the future?

Now that Paris is still a hurdle to Germany’s ambition. Spain has warned that France’s fear over Midcat is largely motivated by fear of future energy exports. Spain asserts that the Midcat pipeline would be used to transport hydrogen – which is considered one of the renewable energy sources in the future.

The idea prompted by the Spanish officials suggests that Paris fears competition for its hydrogen energy exports.

As the pipelines pass through France, Germany sought its help in an attempt to revitalize its economy. But instead of assisting, Paris advanced and gave rise to the German economy’s demise.

Collection of 24 Mercy quotes and captions