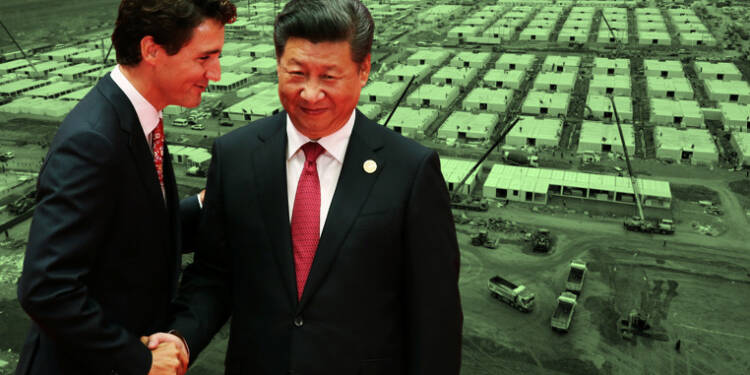 Canadian Prime Minister Justin Trudeau is feeling the heat yet again. The Trudeau government has decided to open another isolation centre in the Windsor-Essex region, which is not at all acceptable to the people of Canada. These isolation centers elicit only a negative response amongst the Canadians, who view them with the utmost mistrust. They have even compared these isolation facilities to the concentration camps, set up by the Nazi administration across Germany and the acquired territories during the 1940s under Hitler.

Trudeau has been implementing policies that have far-reaching negative implications for not only the Canadian economy but the Canadian people as well.

The Real GDP growth is anticipated to be 3.8% in 2022 and 2.6% in 2023. Inflation touched a 39-year high of 8.1% in June before declining to 7.6% in July. According to the data for July, high inflation, rising interest rates, and waning confidence may have started to take a toll on household spending, after a period of consumer resilience during the economy’s reopening. If the current scenario persists, the Canadian economy is set to register a negative GDP growth very soon.

Some of the estimated decline “can be chalked up to lower gasoline prices, but the majority is due to consumer fatigue,” Royce Mendes, head of macro strategy at Desjardins Securities Inc., said in a report to investors. “Canadians have been feeling the pinch from both high inflation and rising interest rates. So it should come as little surprise that retailers are beginning to see the pace of sales slow.”

Read more: Data shows consumers in Canada have gone broke over the past 7 months

And yet, considering the size of the nation, it is regrettable that the federal government is not providing possibilities for Canada to grow at a faster rate.

There are now eleven isolation facilities located across nine Canadian cities. Canadians have had their doubts about them since the project’s inception. A majority of them have been held to be on the lines of Nazi concentration camps from the 1940s. Additionally, Canadians believe that the purpose of developing these isolation centers is similar to what the Chinese government is building for the Ughuyrs in the Xingiang region of China, ever since Trudeau made vocal his great admiration for the Chinese kind of tyranny.

Trudeau said: “There’s a level of admiration I actually have for China because their basic dictatorship is allowing them to actually turn their economy around on a dime”.

Undoubtedly, these locations are also being linked to Canada’s “Indian residential school system,” and who isn’t aware of the strange events that occur at these school locations?

The construction of these isolation centres also raises many questions about the Trudeau government. Firstly, why is the federal government making decisions on behalf of the provincial government when healthcare is primarily a provincial responsibility? Secondly, by putting the spotlight on the pandemic, is he attempting to divert the public’s attention from the primary development issues including the nation’s rising inflation? By this, Trudeau is trying to make the prevailing pandemic a forever event.

Perhaps, the present government is not realizing that the need of the hour is constructing more houses as the number of homeless Canadians is increasing steadily, rather than focusing on the construction of more isolation sites.