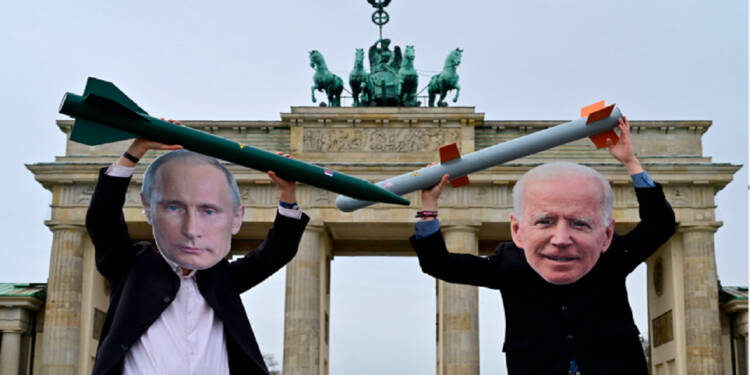 The President of the United States never fails to make hollow promises, however it is no ordinary issue this time. Europe’s increased association with the United States post Second World War has already led to the decline of European superpowers like the UK and Germany.

Increased US intervention in Europe has now become increasingly dangerous for the continent. The continent has become a battleground of struggle between Washington and Moscow and European leaders should perhaps think about it.

The US is reportedly planning to install ground-based intermediate-range missiles in Europe against Russia. They can also be fired from five warships cruising in the Mediterranean, Black Sea, and Baltic Sea near Russia, as well as from installations set up by the United States at bases in Deveselu in Romania, and Redzikowo in Poland.

The United States already has B61-12s, classified as “non-strategic nuclear weapons,” deployed in Europe in Italy, Germany, Belgium, the Netherlands and Britain.

However, these installations have offensive capabilities similar to those of strategic weapons and are solely and precisely used to target Russia in an event of war.

Well, the installations in Europe are not a fresh endeavor and have been in place for many years, but somehow the timing of the deployments and other events linked to it paint a very threatening picture for global security.

Read More: How the US turned the Marshall Islands into an unlivable nuclear chamber

The Biden administration has reportedly backtracked from its former promises and has pushed for reforms in “No first use” policy with respect to nuclear weapons both in local and international forums.

Biden, who pledged during the campaign to use nuclear weapons only in response to a similar attack, declined to set it as U.S. policy.

The three-paragraph summary of the long-awaited Nuclear policy review released by the Pentagon recently implies that Washington would only consider the use of nuclear weapons in extreme circumstances to defend the vital interests of the United States or its allies and partners.

The President has altered his stand amid indirect standoff with Moscow in Ukraine. The “No First Use” promises made by Biden have now lost its meaning.

The Treaty on the Non-Proliferation of Nuclear Weapons, commonly known as the Non-Proliferation Treaty or NPT has long been a stage for world powers to reaffirm their stand on disarmament of their nuclear arsenals. However, the United States has reportedly influenced the organization and has called for some very dangerous modifications.

According to a version distributed by NPT Chairman, a call for nations to adopt doctrines forbidding the preemptive use of nuclear weapons has been removed from a draft report for an ongoing international disarmament conference.

The treaty which came into effect in 1970 authorizes only five countries to possess nuclear arsenals, namely Britain, China, France, Russia and the United States.

The previous version of NPT drafts highlighted that nuclear-weapon states should stress on the adoption of a no-first use policy, however the sentence has ironically disappeared from the latest version, given the prevailing situation in Europe.

This indeed is a worrisome piece of news for Europe and the whole world. The systematic promotion of nuclear war by the Biden administration is an attempt to pressurize Russia to let go of the Zaporizhzhia nuclear plant in Ukraine.

Read More: Biden’s war in Ukraine has led to an unprecedented nuclear race across the world

Although, it seems like Biden has miscalculated his steps, because the last time we checked, Russia was the most efficient nuclear power in the world. The Russians reportedly have 5977 declared nuclear warheads with about 1588 declared warheads deployed in strategic locations.

Washington is effectively pushing nuclear war on European soil, a fact that the European leaders should take note of because it would be their lands that will be ravaged, their economies that would sink and their people that would suffer just to fuel the ambitions of the 79 year old President of the US. The humankind has already seen a catastrophe in the name of Hiroshima and Nagasaki, we don’t want another such episode in Europe.