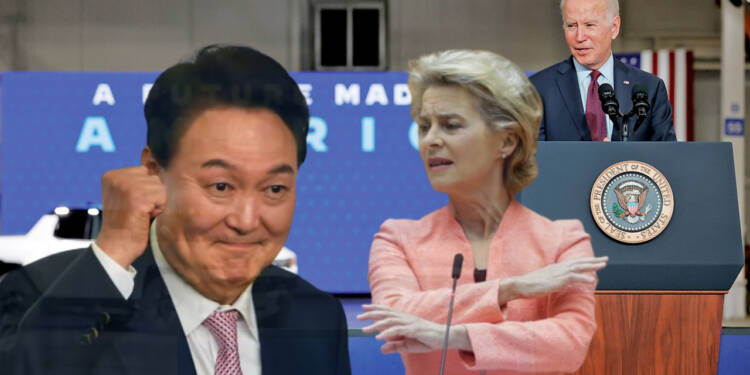 Democrat President Joe Biden’s reign has been nothing short of a catastrophe for the United States. The nation is in the grip of record inflation and the economy recently went into recession in the second quarter of 2022.

Biden’s administration is so flawed that he was able to orchestrate the shrinkage of the largest economy in the world. His weaponization of the USD against Moscow during the recent war has triggered the fall of dollar hegemony.

If all of his actions were not enough, the 79-year-old is now coming up with schemes that will have an ever-lasting impact on the global auto Industry and the local US auto industry would be the biggest collateral.

After failing to control the record high inflation, the democrat administration has come up with the Inflation Reduction Act, which is the largest piece of federal legislation ever to address climate change. It will invest $369 billion in provisions relating to energy security and climate change.

The US has already lost many allies under the current democrat administration and is on the path to losing many more. Close US allies like South Korea, Germany, and Japan have dedicated auto industries which contribute heavily into their economies.

However, with the enactment of the IRA legislation, automakers in ally nations working in the US would not get the tax benefit. The negligence of allied nations by Biden has incited these nations that are now looking to challenge the US in the WTO.

Lee Changyang, minister of trade, industry, and energy for South Korea said the government would consider whether to file a lawsuit at the World Trade Organization (WTO) over the bill allegedly violating WTO rules and a bilateral free trade agreement between South Korea and the United States.

Seoul has also indicated that it would also be consulting with the EU in the near future to come up with a joint response to the US.

South Korean automobile company Hyundai said that it is “disappointed that the current legislation severely limits EV access and options for Americans and may dramatically slow the transition to sustainable mobility in this market.”

Moreover, It looks like Biden has missed the fact that by the enaction of the legislation, he is formally weakening of global auto forces that had the potential to counter the Chinese influence. Both, South Korea and Japan could be the frontrunners in the global EV vehicles manufacturing. US’ policy could hinder their growth and revenues and could put them in an unfair position against the Chinese automakers.

The economies of South Korea and Japan are significantly dependent on the auto sector. Disclusion from a large market like the US would lead to the loss of GDP for these nations that would hinder their ability to counter China in the Indo-Pacific.