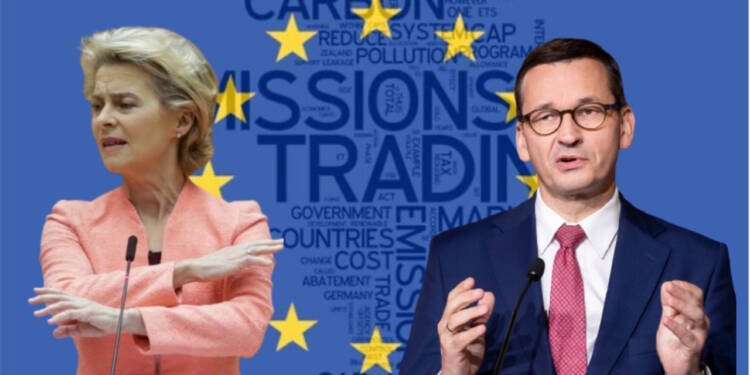 They say that ‘Every challenge brings a new opportunity.’ Seems like the European Union took it seriously. It is hell-bent on rubbing salt into the wounds of European countries.

European countries which are going through a rough period after their anti-Russian actions are looking at the EU with hope. Yet, their calls are falling on the EU’s deaf ears.

EU’s Emissions Trading System (ETS) and how it operates

The EU Emissions Trading System (ETS) is a cornerstone of the European Climate adaptation strategy. As per the EU, it’s a primary weapon for lowering greenhouse gas emissions in an efficient and cost-effective manner.

The “cap-and-trade” methodology underlies how the Emissions Trading System operates. It establishes a strict ceiling on the total amount of particular greenhouse gases that the system’s covered entities are allowed to release annually. Over time, this cap is lowered to minimize overall emissions. One allowance entitles the owner to emit one tonne of carbon dioxide (or its equivalent).

“Why add another €90 or €100 in the form of Emissions Trading System (ETS) allowances to already very high electricity prices? We can revert back to the system the moment we secure energy for all of Europe and we bring back peace to Ukraine,” said Morawiecki, in a news conference.

Actually, the Emissions Trading System (ETS) method puts financial deterrence by requiring companies and power plants to purchase permits when they emit CO2 emissions, so there is less pollution and fewer expenses associated with carbon.

However, companies that use a lot of energy have long complained that having to pay for the carbon emissions puts them at a disadvantage compared to industries outside of the EU.

Also, when electricity prices are already rising at record levels in the European Union, the cost of Emissions Trading System (ETS) is transferred to customers who are already facing the brunt of inflation.

In Poland, the challenge is more than just making the shift to a greener economy; it’s also about preventing energy poverty. Protecting consumers and small companies from the effects of increased energy prices is a primary political goal in a nation where the GDP per capita is below the EU average.

Poland was also the first member of the EU to request the suspension of the Emissions Trading System (ETS) as the energy crisis developed last year, blaming EU’s carbon trading programme for the high cost of power. At the time, Czechia backed its move.

Later, Morawiecki wrote an editorial piece urging reform. He issued a warning and called for some sort of price control on the EU carbon market, saying that the price increase on the Emissions Trading System (ETS) was out of control and was impacting the household budgets of EU members.

However, the calls from Poland are a part of a larger PR campaign. Polish state-owned utility PGE began an advertisement campaign at the beginning of year accusing the ETS of being the cause of the nation’s high energy prices.

The EU emissions trading system (ETS) contains a gradually decreasing amount of CO2 permits that power plants and industry are required to buy to cover their emissions.

Therefore, the Emissions Trading system will be the last straw that would break Poland’s back.

Spain has also had raised concerns over the volatility in ETS. It demanded action to curtail carbon trading in the EU market, claiming that speculation had driven electricity prices.

Poland’s government even suspended quality criteria for the use of coal for home heating, citing the “present extraordinary circumstance” brought on by Russia’s war in Ukraine.

Supporting their decision of overseeing the established norms, government spokesperson Piotr Müller said, “We have a difficult situation, not only in Poland but throughout Europe, in terms of elementary security when it comes to heating. Therefore, in this situation, when one chooses between safety and certain pre-existing regulations, the latter have to be adjusted.”

As Morawiecki put it, “Even if a short-term return to coal means postponing our ambitious climate goals, it may be a necessary condition for maintaining a strong European community capable of resisting Russia and supporting Ukraine.”

He emphasized that Poland would not compromise its basic security for the EU’s green agenda, “The green transition cannot come at the cost of basic security. And if the situation forces us to do so, then we must not hesitate to return temporarily to traditional sources of energy.”

The European Union, which should have aided the European states, has rather chosen to exploit them when they are at their most vulnerable. However, Poland has made it clear that it won’t adhere to EU’s dictatorial measures.

Canada is in recession but Alberta isn’t, and Trudeau doesn’t like that